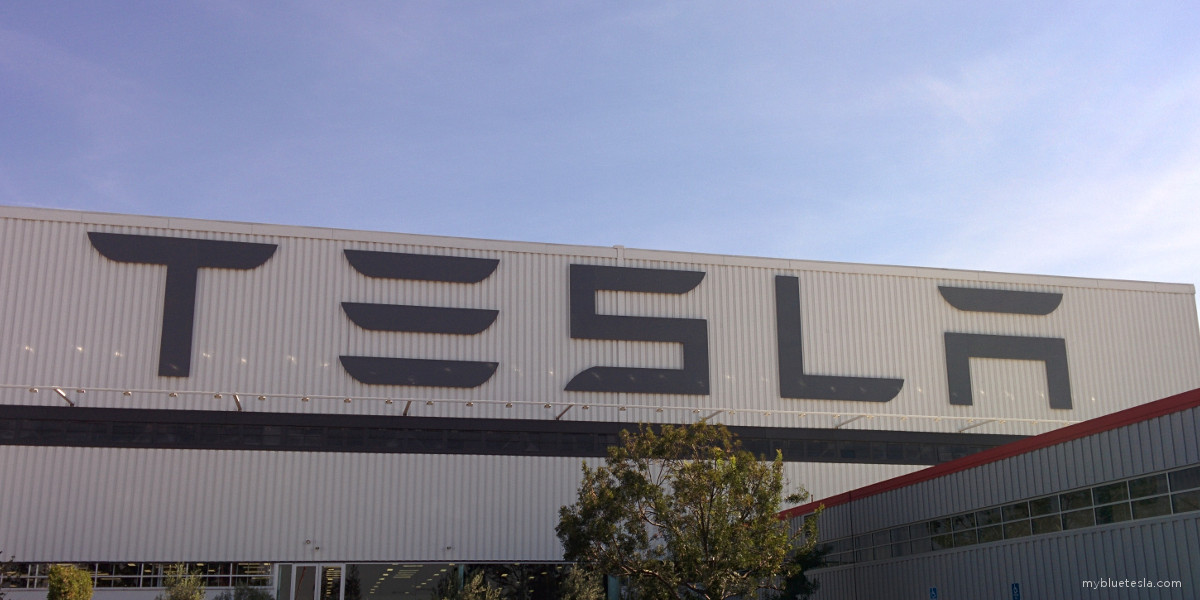 For a long time, the only thing I knew about the name "Tesla" was that they bought the old NUMMI factory in the south area of Fremont and that they made some kind of two-seater sports car which I saw once in San Carlos while eating at Speederia Pizzeria. I didn't think much of it at the time when I saw the Roadster, figuring it's just another rich person's toy. Seriously, who cares.

A few days ago I heard about the company in the news and remembered the factory with the big TESLA name in the front. I figured I'd stop by and see what the hype is about. It's at least worth a look to check out an actual car company in my home town.

I don't drive by this area very often and when I found the entrance to Kato Road, it took me a few minutes to figure out where someone was supposed to go to check out the cars. This isn't a dealership, but I assumed that for them to grow interest they'd have to show off their products somehow.

Eventually I saw the Delivery Center sign, parked, and walked inside the front door. There was no showroom model on display, but I did see some people walk past a second set of glass doors to what appeared to be a larger room.

And that's where I first saw the Model S. A rather large vehicle, especially for someone who's used to driving small hatchbacks all of his life. It was actually quite striking, especially for an American car. I'm almost never a fan of the design language from Ford, GM, and others, but the Model S had exceptional cues which were modern, yet simplistic. This is the first criteria when I decide on a car, as vain as it may be.

One of the first things I noticed was a flush, chrome door handle. There was nothing to grab onto to pull ... so I did what anyone in my position would do - touch it.

I spent at least an hour walking around the car, sitting inside it, finally learning that this thing is "electric." The fact that it's electric didn't really resonate with me at first because I was too engrossed in just looking at the car. Even the 17-inch touchscreen wasn't the center of attention. The minimalistic interior, large sunroof, cabin-styling, and the overall package started to sink in. Having an extra-large tablet as a center console was something that I had sort of taken for granted would eventually happen so it was initially a ho-hum impression. This is Silicon Valley, after all.

Then it started to dawn on me - you have to charge this car. There's no gas tank. That's a weird paradigm shift especially because I've never paid attention to those ugly pods like the Leaf or Prius or whatever eco-friendly cars people talk about. I seriously don't think Nissan or Toyota really want to drive alternate-fuel adoption with the hideous designs they're putting out there.

But there was the Model S in front of me, a very good looking car (albeit a bit larger than I prefer) with a very compelling story behind it. The zero-emissions benefit was starting to round out the picture. It started making sense. On top of that, this car's Made in America.

Until that moment, I was not really in the market for a new car, even though my GTI is aging quickly with 235k miles. If I had to get another car, it likely would've been an Audi A6 or something along those lines. I'm not really that much of a car guy.

The A6 is a far distant second choice now ... but wow is the Model S expensive.