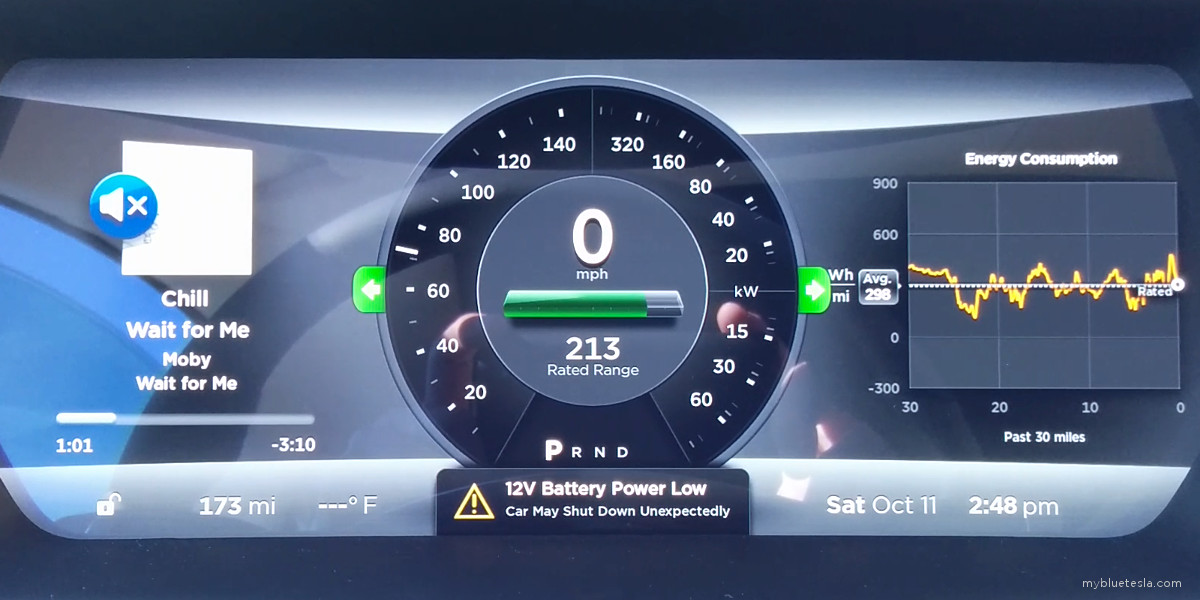 Around 02:45 in the afternoon and driving along 101 North in Santa Clara ... all of a sudden I get the dreaded "12V Battery Power Low - Car May Shut Down Unexpectedly" warning on the dash. The car started decelerating on its own and I steered over a couple of lanes, coming to a stop on the shoulder. 173 miles on the odometer. Well, that was quick. Not even one full charge worth of driving and I already have a catastrophic breakdown on a near-six-figure car. How disappointing, but a good opportunity to test out Tesla's Roadside Assistance.

Called them up, got a human on the other end pretty quickly, explained the problem, she had me reboot the center screen (didn't fix it), then the instrument panel (didn't fix it either), then power-off the car and then back on after a few minutes (strike three). Time to call the flatbed. Not exactly positively impressed as a new owner, but I've read about these problems on the TMC and Tesla Motors forums before. I figured this issue had been resolved by now.

Roadside Assistance's first suggestion was an Uber ride to my destination. Really? I've driven the car only 164 miles since I took delivery and I'm already at my first breakdown. Can I get a loaner instead? I've heard an Internet rumor that Model S loaners would be available, unless of course they're all taken due to so many other breakdowns ... which would be even more concerning about this once-in-a-lifetime, extremely-indulgent purchase that I had to justify to myself on so many levels.

After a few minutes and a callback or two, she indicated that the Sunnyvale service center had a loaner vehicle available. Just before the tow truck arrived half an hour later, the 12V battery notice disappeared and I could put the car into Drive again. To play it safe though, I decided I'll let Tesla look it over. Who knows if this problem would pop up again. 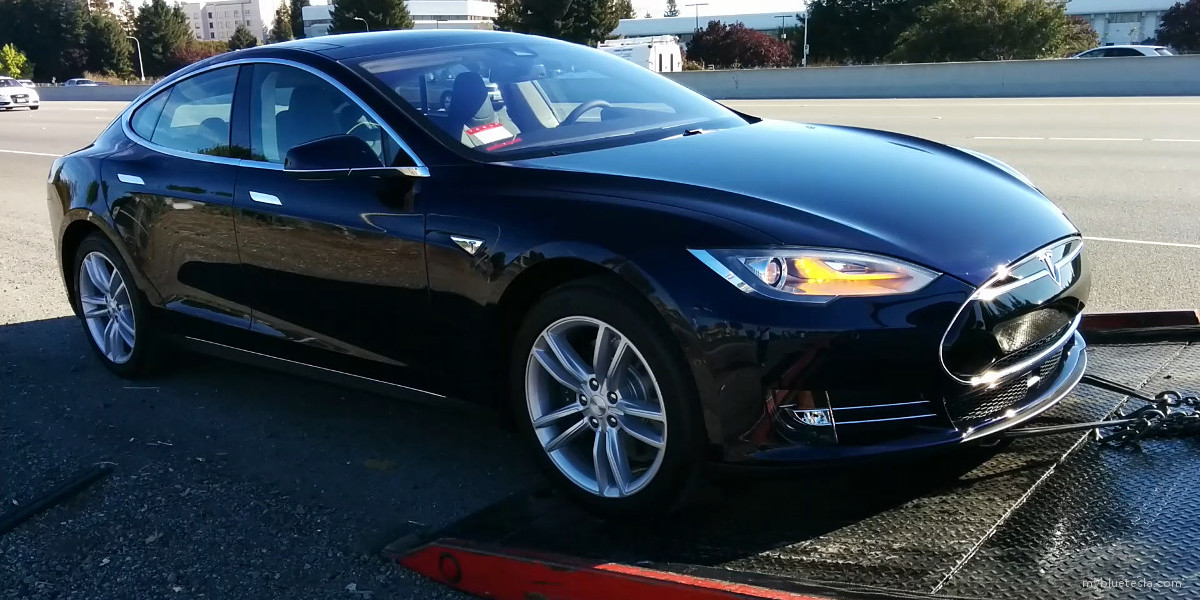 It really sucks to watch your brand-new / Silicon Valley / 21st-century car getting pulled onto the flatbed of a 20th-century tow truck, as if The Future wasn't quite ready for our times. That pessimistic feeling of buyer's remorse and self-doubt slowly started creeping in.

The tow driver wasn't sure how to set the car in tow mode, but I had already done it for him. The on-screen instructions were a no-brainer.

Once we got to the Sunnyvale service center, I had a quick chat with the manager, stressed the importance of handling the paint extremely carefully (or no direct handling of the paint if at all possible), then signed the loaner paperwork they had waiting for me. And just like that I was in a black S85. The process was quite seamless. Tesla Service gets serious gold points so far and confirms the experiences others having been posting on the forums.

This loaner had a tan interior, no sunroof, no Autopilot hardware nor parking sensors, but did have the Alcantara roof and dash covering. I had originally considered this color combination and at one point was really adamant about it, but now that I'm in one I'm glad I ordered the blue/black. I'm also even more certain that Alcantara isn't my thing. But otherwise, an S85 is an S85. Now I can get to the office.