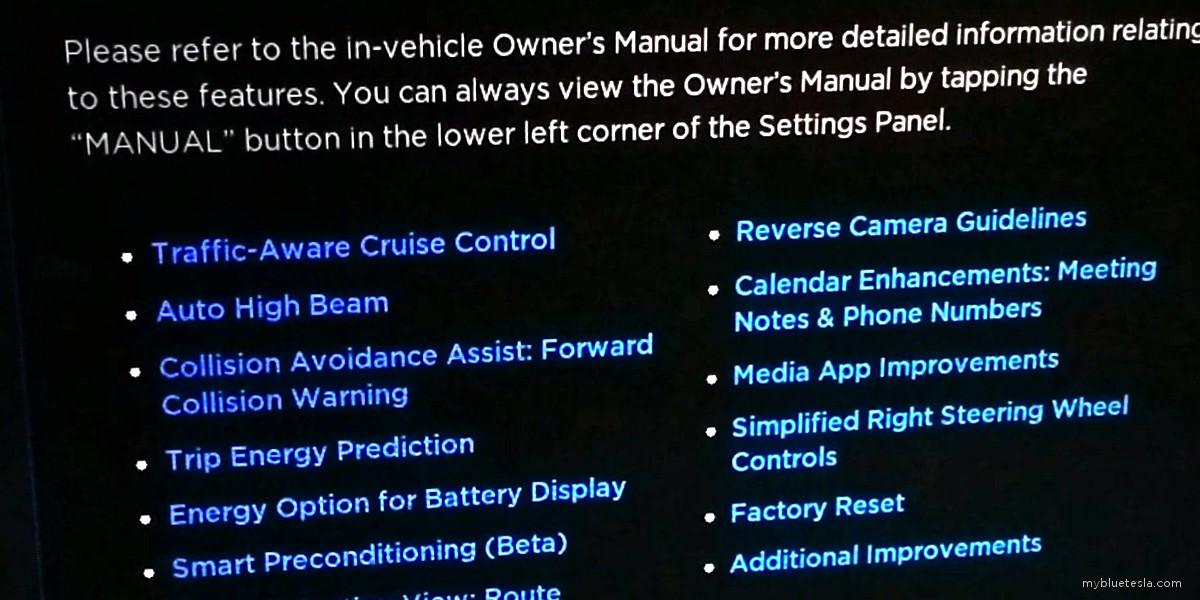 Now I finally get to use that "square thing" underneath the nose cone of the car. While there are many new features in this release, the big news for me is Traffic-Aware Cruise Control. It adds a couple a small visual elements to the speedometer, including a small inward-facing arrow / tick mark at the outer edge of the speedo dial for Speed Assist (the set cruise speed). Speed Assist also accounts for any speed offset the driver sets from the posted speed limit signs.

The car now has the ability to adjust its current speed based on the position of the car immediately ahead using the forward radar and maintain a set distance (based on an adjustable setting using the turn-knob on the end of the lower left stalk). It's quite intuitive.

Bumping this lower stalk up or two by one or two notches also changes the set cruise speed limit by 1 or 5 mph increments or decrements. The accelerator pedal is starting to become a thing of the past.

In practice, coordinating between these controls takes a little getting used to. Since the car can read posted speed limit signs using the camera on top of the windshield (and I think also knows the limits based on GPS and/or map data), a digital representation of the signs appear in the center of the speedometer, providing real-time feedback of the driving environment. Awesome.

The longer I own this car, the more convenient and functional it becomes. All without having to visit a Tesla Service Center. Once you take over-the-air update capability for granted, dealing with any other car that doesn't have it will feel like going back to the Stone Age.

Unfortunately, Model S vehicles which don't have the Autopilot hardware built-in won't be able to use many of the new features in the 6.1 release. I was very fortunate to have ordered my Model S when I did because mine was one of the first to roll off the assembly line with Autopilot. I took delivery of my car about a week and a half before the official Dual-Motor/Autopilot announcement was made. Had I ordered one month earlier, I likely wouldn't be able to enjoy a lot of these new features.

On a side note, I think Trip Energy Prediction will be quite useful next month when I take my first long-distance road trip and test the Supercharger network in the wild, wild west.