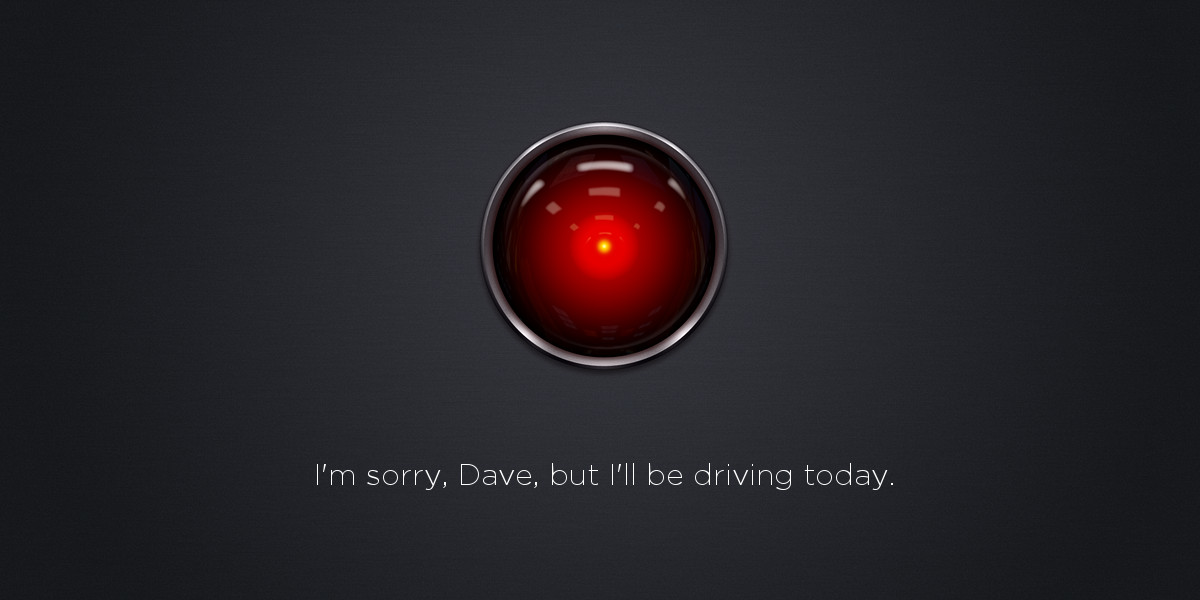 Christmas comes early again. In the 21st century, reindeers ride over 3G, and this time 7 is the magic number with yet another major software update. 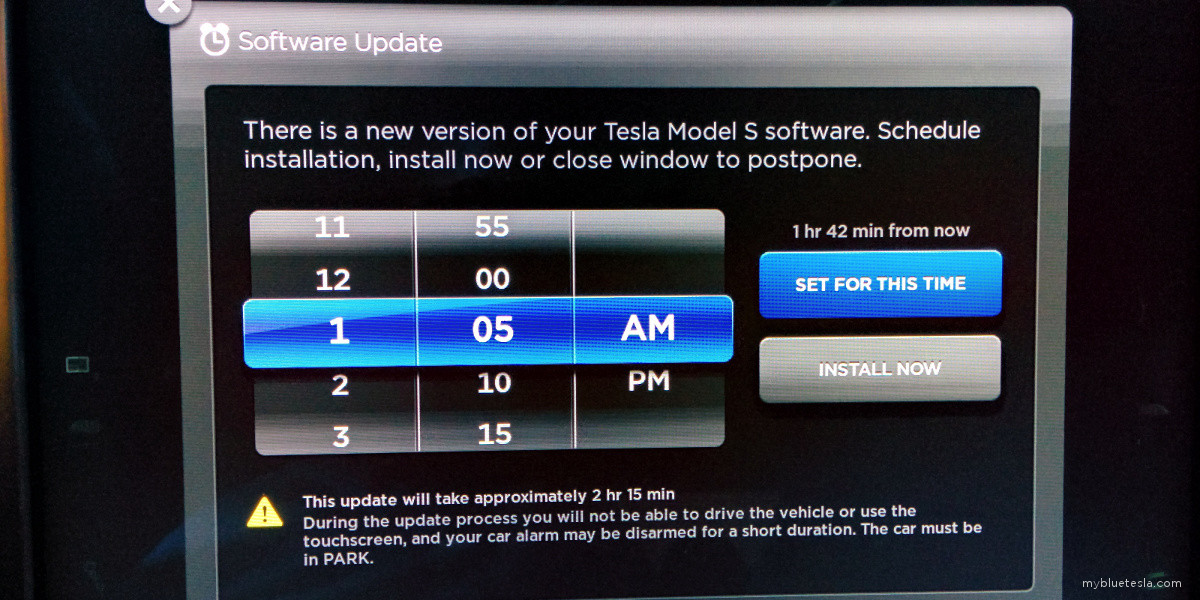 That’s the new release version which brings the Autopilot concept (as demonstrated in the Dual Motor reveal event a year ago) to reality. This includes Autosteer, Auto Lane Change, Autopark, and Automatic Emergency Steering and Side Collision Warning. Fundamentally, the car is starting to take shape of what some perceive as the future of transportation. While self-steering technologies aren't new, it seems none of them are really that usable or practical. Until now.

Another major change in 7.0 is the UI update. The original energy meter/speedometer has been replaced by a rendering of a bird's eye view from behind the vehicle and the lane markings visible to the camera as well as other cars, trucks, and motorcycles detected by the radar and ultrasonic sensors. The vehicle's movement as it relates to Auto Lane Change or Autosteer motions are given visual eye-candy treatment in the instrument panel. Side collision detection (and color-coded distancing via "fluid lines") is also integrated into the UI, although I don't think this feature is that useful the way it's implemented. I'd probably prefer a flashing indicator on the side mirrors since blind spot detection here probably wouldn't see a speeding motorist that's approaching fast in the next lane over.

I should mention that while many people might equate this as "autonomous driving," Autopilot is really a driver-assistance feature set - the human meatbag behind the steering wheel is still ultimately responsible for the vehicle's actions. While I'd love to be able to get a half hour of extra sleep or check emails while in commute, we're not quite there yet. There are plenty of legal issues still to be sorted out before The Machine will butler you to your destination, so keep your hands on the steering wheel, folks.

So all that said, it's quite stressful relinquishing control and letting the computer take over some primary functions. The sales pitch is great: computers react faster, are undiscriminating when it comes to sensor input, and have better environmental awareness than the inferior biological organism sitting in the driver seat with a mere two eyes. But as a human being, you're acutely aware of how technology is limited and taking it for granted could mean death. For that reason, you're even more focused on the road while Autopilot functions are engaged. Hopefully I'll eventually come to trust the technology to do my bidding (and not the other way around).

This is what most people will think of when they hear "Autopilot" and it more or less works as advertised, provided that the camera can read the lane markings correctly. If there's a lack of contrast between asphalt and markings like in cases of road construction, old roads, or rainy conditions, the performance likely suffers. If the windshield is dirty or there are other obstacles in front of the camera, this could also pose problems. Other road conditions may include instances where the lane markings disappear for a short stretch along a curve and Autosteer has to make a calculated "guess" on what to do if there's no car in front to track. For these reasons, I'd say definitely keep your hands on the wheel. The machine isn't quite so evolved yet. 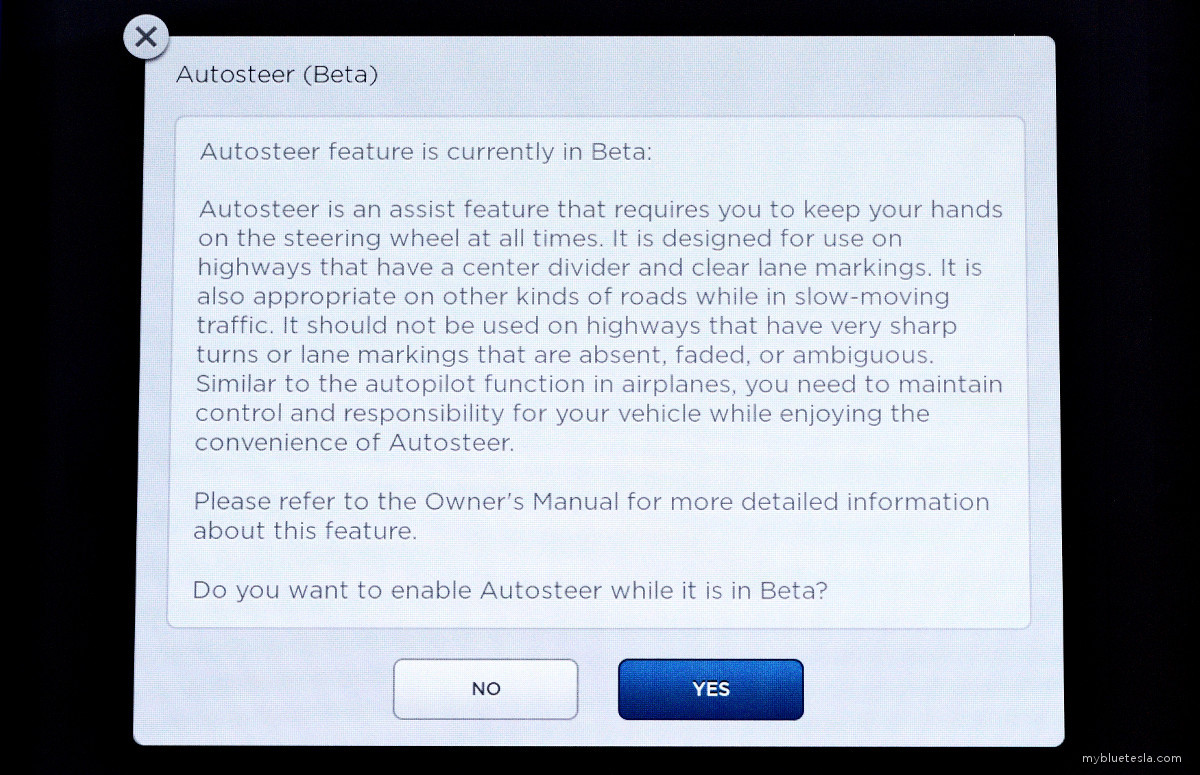 Since the camera is located in the upper center of the windshield, it can calculate whether vehicle is actually centered in the lane better than a human. It took me some time to trust it, but I eventually came to understand that I have had a tendency to keep the car "centered" more towards the left side of the lane. Until now I always thought I was pretty good at keeping the car at true center, but this is one area I'll have to defer to the computer for its real-time calculation wisdom and perspective.

Behold, the magic lever which turns on The Machine: 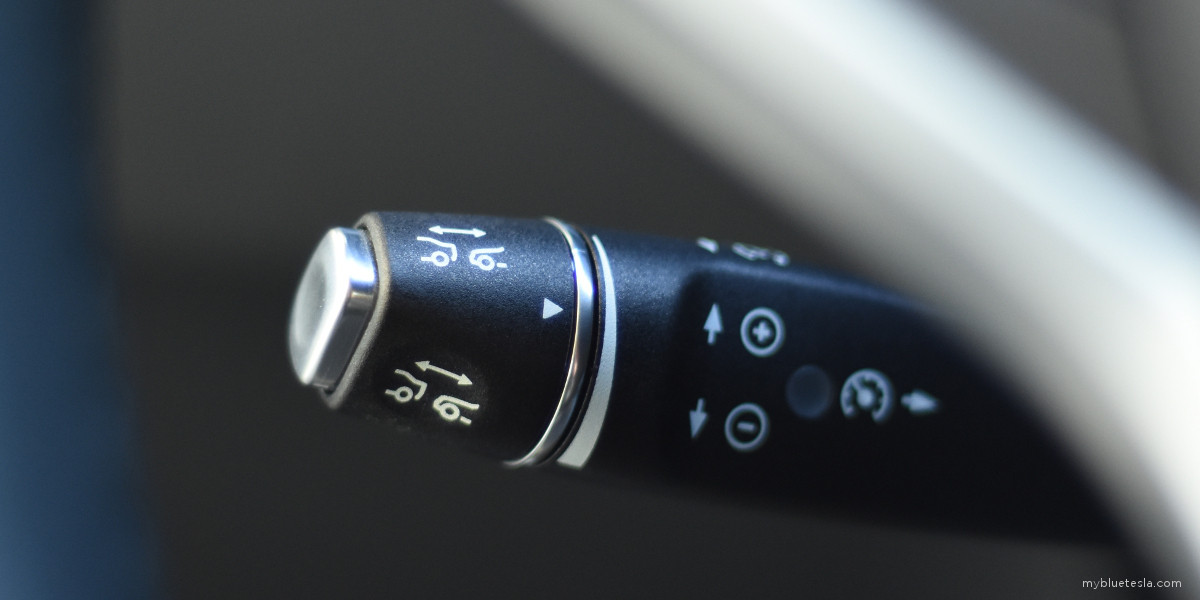 One annoying thing about Autosteer is driving along the first lane on the freeway alongside a concrete wall center divider when the shoulder is relatively narrow. The car tends to shy away from it and veers towards the right side of the lane. While not a big deal if there are no other cars around, it even does this when the freeway is pretty packed. I often find myself taking control around these areas. I feel the human brain will perform better. Score one for the homosapiens.

Flicking the left stalk only moves the car over one lane per driver signaling. You can't have it cross over two or three lanes in a row which is a good thing from a safety standpoint. Otherwise I could see plenty of abuse with drivers using it to swerve around in traffic. I noticed that when the car moves into a lane by itself, it often tends to steer itself a little too far towards the outer edge of the lane and then centers itself in a few seconds. Even I could change lanes cleaner that this, but perhaps there's a purpose behind this behavior in the algorithm.

This one took me a little while to trigger. In theory I would slowly drive past a row of cars parked next to the sidewalk and if there was a space large enough for a Model S to fit, a "P" icon would show up in the instrument panel. 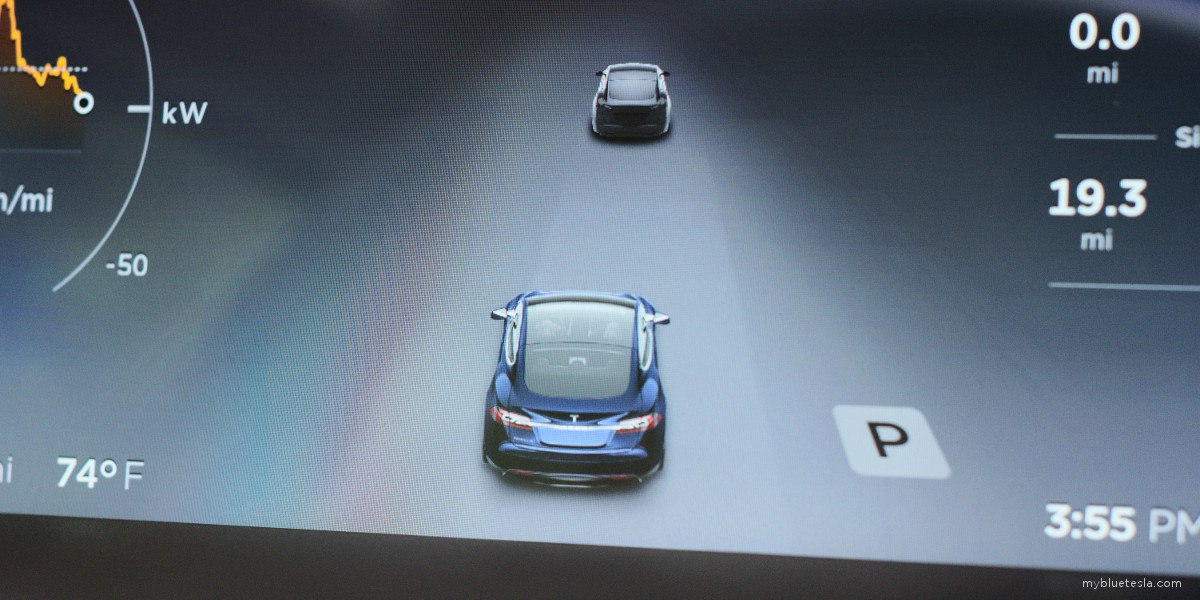 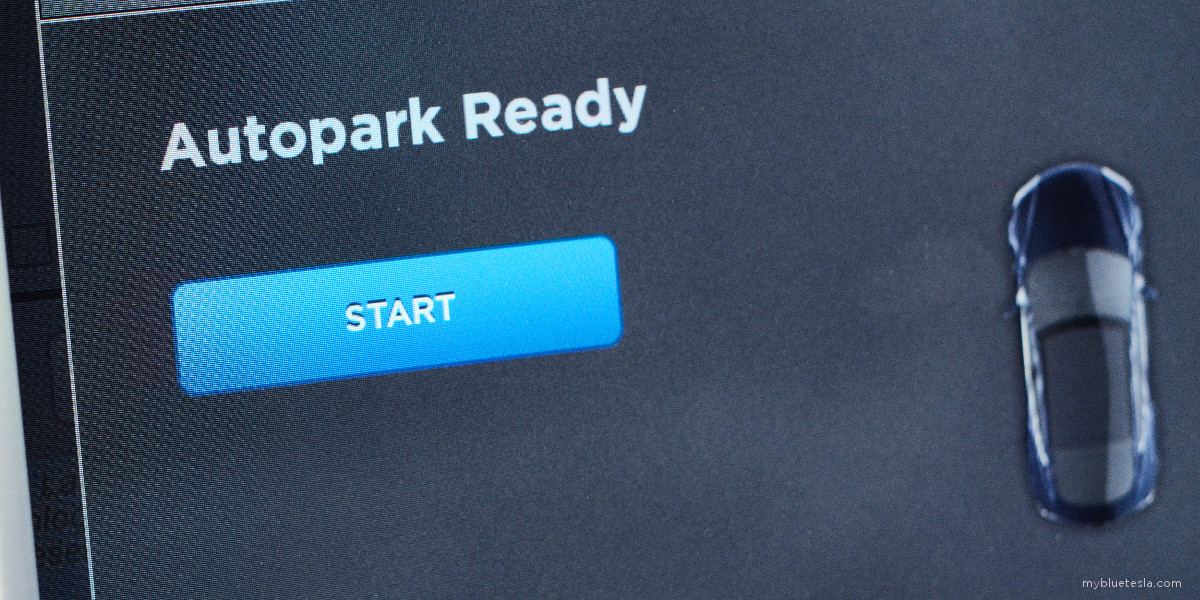 I had to fumble with this a bit but finally got it to work. If there's an open space, you have to pass that space completely before the system notifies you about parking availability. It's a little unnerving to watch the steering wheel turn itself and the car slowly move back and forth into the spot. It tends to work fine, but there were a few times when the backup camera showed the rear bumper coming very, very close to the other car. I kept my right foot hovered over the brake pedal in case it got too close for comfort.

That said, I almost never parallel park for one simple reason: Tactical Defensive Parking Rule #1 dictates that if I want to avoid getting door dings or bumper rashes from other cars, park far, faaaar away from anyone else. This is the religion I follow. I walk the extra few minutes to get to the store. Ain't no one touching my car.

I don't find the fluid lines as useful as they could be. It feels like there's a visual delay between reality and what appears in the instrument panel, perhaps by a third of a second. I also don't exactly plan to test this feature.

The first challenge is letting go. Not of the steering wheel, but the need to be in active, full control like we're all used to. Watching the car replace you as a fully-engaged participant in the driving experience can be unnerving. It's important that the human still has to actively monitor the car, but not really actively provide input in the steering and pedals. There's also that ominous feeling that the robots are rising and the conspiracy theory to replace humans is real. Perhaps I've watched too much dystopian sci-fi.

Here's the original conception of Autopilot in the instrument panel when it was announced last year:

One the inherent advantages Tesla has is the ability to collect and analyze vehicle telemetry from all Model S cars out there, allowing for real-time visibility on how the on-the-road fleet is handling various road conditions and driver actions in relation to Autopilot. This should allow them to continuously fine-tune the software and deliver the improvements immediately over the air. Other car manufacturers don't really have a working network to do this yet.

I do, however, miss not having the old speedometer. It was a really attractive and intuitive energy meter. I wish there was an option to switch back to it when Autosteer is not engaged. The new UI has a smaller and much more simplified version of the old meter, but it's certainly not sexy to look at. Part of me suspects this is all part of a larger plan to "encourage" owners into accepting a future where people are driven, not driving around.

Here's the original Tesla announcement for Autopilot a year ago:

I should note that my car is one of the first to roll off the assembly line with Autopilot hardware. It was built sometime around mid-September 2014 and Tesla's announcement of Dual Motor and Autopilot wasn't until October. I was very, very lucky to have placed my build order in when I did because if I had jumped the gun by maybe a week or two, I likely would be stuck with the pre-Autopilot setup. Not that I'd mind the older version of the car that much since it's still a Model S.