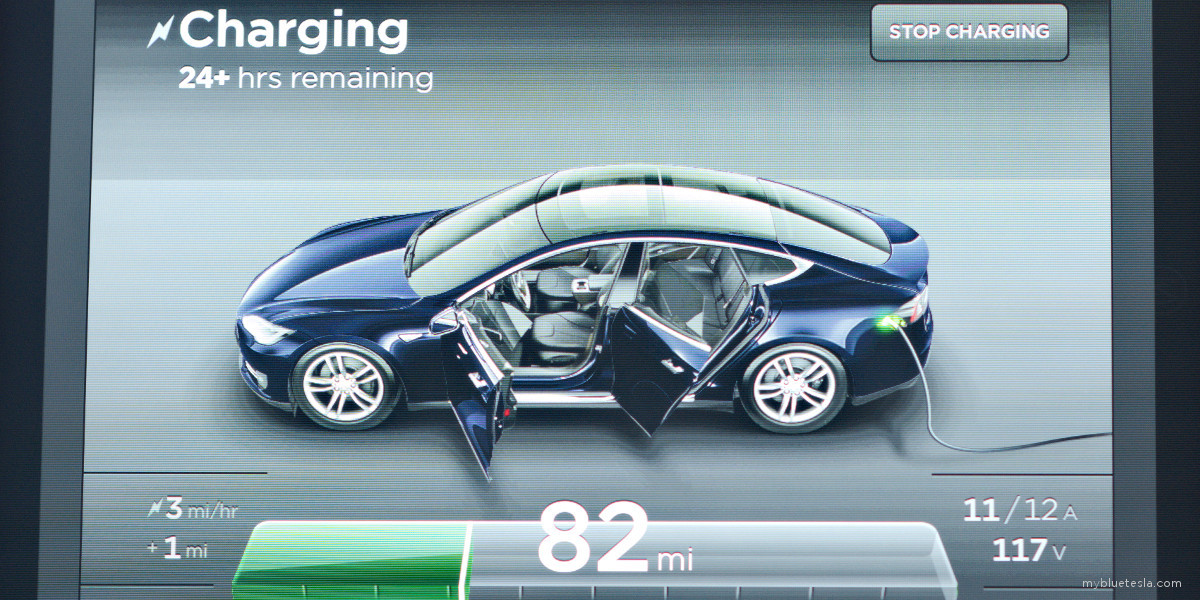 A few weeks before I took delivery of my Model S, Tesla sent me the contact of a recommended electrician to install a NEMA 14-50 in my garage for the optimal home charging experience. This is to facilitate the dream of waking up with a full charge every morning via the convenient eFuel station in the garage.

It turns out that my situation wasn't so straightforward. Since I live in a condo built in the late 80s, the power feed into my unit would need to be upgraded. In addition, the breaker panel isn't located in my garage but rather my bedroom upstairs (for whatever odd reason) and that new wiring would have to be laid out for a dedicated breaker to the garage.

This would mean stringing new wiring through several walls which are shared with other condo units. This, of course, will get the HOA involved and also cost much more than I anticipated, perhaps well into the thousands rather than the hundreds as I had originally expected. My clothes washer and dryer units are also upstairs so that 20 amp receptacle isn't really an option either.

So I decided to see if I could live with regular household current charging and had my power company (Pacific Gas and Electric, "PG&E") switch me to a rate plan specific to electric vehicles. My commute is roughly 20 miles each way, plus maybe an additional 10 miles for grabbing lunch or making a grocery run. I also have a set of ChargePoint stalls literally a stone's throw away from the door at my office (and a very short throw at that). The ChargePoint stalls have a rate of $1 US per hour and at their maximum charging speed it comes out to around 20¢/kWh.

Then there are the various Superchargers in the San Francisco Bay Area which I can make use of - the Fremont factory, San Mateo, and Mountain View Superchargers are ones that I rely on when I need a quick charge when I'm running low and I'll need a lot more for the next day.

I tend to not use the ChargePoint stalls at my office simply because they're usually occupied by cars which really fit into the "range anxiety" category - Chevy Sparks, Nissan Leafs, etc.. Those drivers need the buzz way more than I do.

When I do make use of the Superchargers around the Bay Area, I almost always follow one rule: only use them when they're relatively unoccupied. Since Superchargers are meant to help long-distance drivers passing through the area, it's rude to impede out-of-town travelers. Since local-charging is implicitly discouraged, I try to avoid this unless there's almost no one around and little chance of me slowing anyone else down by sharing a stall and reducing throughput. My time is also better spent elsewhere than sitting in the car for half an hour or more while surfing on my phone. While the novelty of free electricity and "charging my car" was fun during the first few months of ownership, I had to get on with life.

But overall using a regular 120V outlet for my daily commute has been mostly practical for me. During the night when I'm charging, it costs me around 11.5¢/kWh (during off-peak hours at least) which comes out to less than $3/day to supply my commute, which is a lot better than $10/day to fuel my old VW. Most people pay more for their Starbucks fix. I supplement with the occasional use of the ChargePoints or Superchargers. And oddly enough, after I got onto the PG&E EV-A rate plan, my overall monthly household electricity bill went down. Go figure.

On top of that, I set the current draw to 11 amps. For whatever reason, leaving it at 12 amps always triggers something in the house to trip the breaker.

For most people, I'd still recommend getting a NEMA 14-50 installed since an electric panel for a house is normally in the garage, or at the very least leverage the dryer outlet.