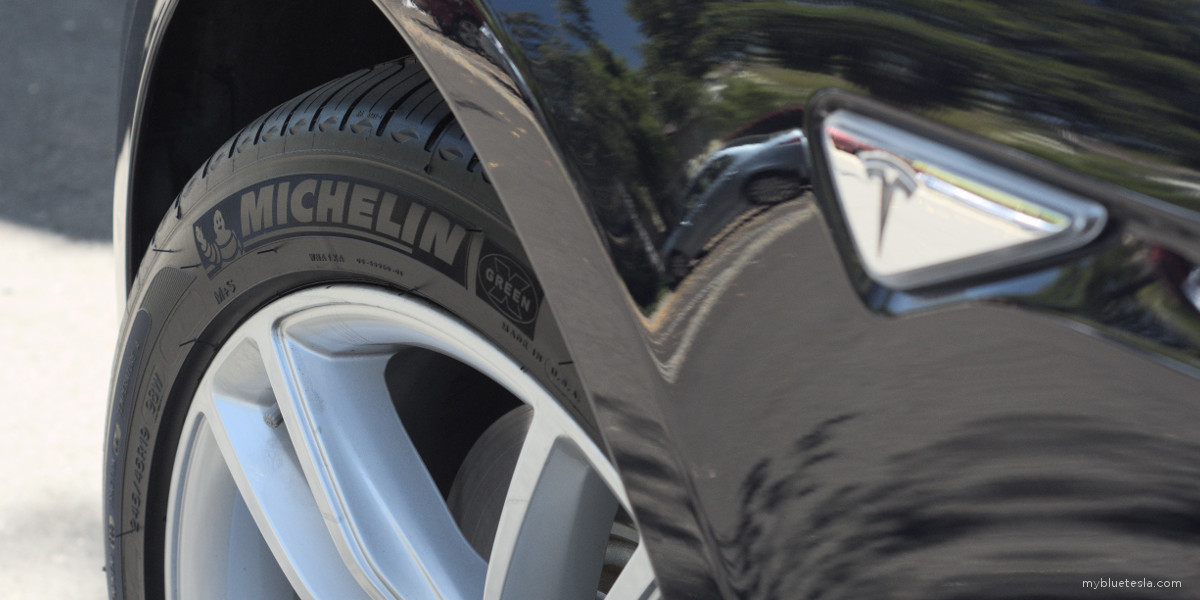 42,290 miles. That's how far my original set ran for until I decided to replace them with fresh ones. That's not too bad, I reckon. I'll be traveling to Las Vegas soon and I'd rather not be running on thin treads and have something go wrong in the middle of the desert where it would be more than a slight inconvenience. Keep in mind that I generally drive conservatively and rarely stomp on the accelerator. I don't take high-speed turns around sharp corners and I've never set (tire) on a race track. I prefer a more civilized ride.

At the time of this writing, Tire Rack sells these Primacy MXM4s for $287.35 plus taxes and shipping. Tesla charged me $300 so the cost is likely cheaper than Tire Rack when factoring in shipping costs.

Virtually 99 percent of my driving is done in the San Francisco Bay Area. The concept of snow or icy roads is non-existent here. I don't think I've ever driven in snow in recent memory and likely won't in the near future. The most challenging environment for these tires would simply be rain.

There's not much else to comment on about the Michelins other than they work just fine. I've always entertained the idea of trading up and going to the 21" Turbines, but tread life on summer tires (the Continentals or Pilot Sports) and having to swap out to a new set every 10 - 15k miles is always a concern from both a cost and time perspective. There's not a lot of margin in my schedule to allow me that sort of luxury. The 19" wheels with all-seasons is the most practical setup.

I got a Mercedes E350 again as an Enterprise loaner while the tire change and alignment was being done. As a matter of fact, this is very possibly the exact same E350 loaner I had during my second annual service maintenance back in March.

There's a slight familiarity when sitting in a modern Mercedes. In particular, some of the switchgear is exactly the same. Well, almost. For example, the cruise control stalk is physically the same as the one on Autopilot-equipped Teslas, but the markings are different: 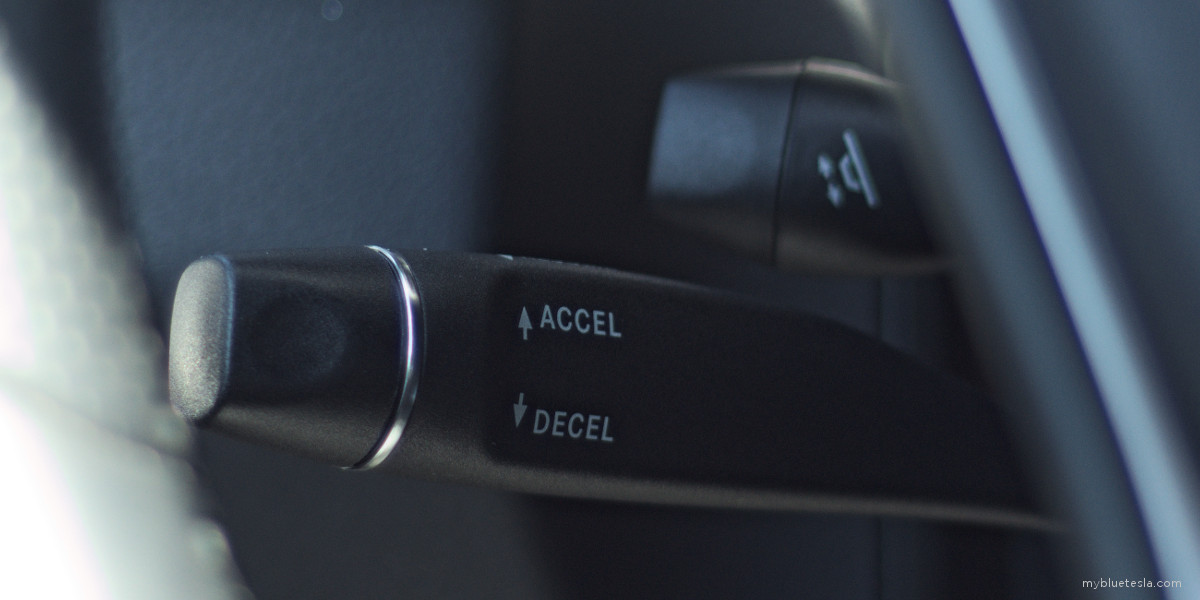 But otherwise a Model S and an E350 aren't exactly comparable. Moving from the former to the latter feels like a downgrade and you immediately sense it when you realize that in order to get up to speed, you have to move past this pesky thing called "first gear" after releasing a manual "parking brake." All of this is, of course, preceded by inserting the key fob into an "ignition" and engaging a turning motion to start the "engine." How quaint.

That said, this particular loaner doesn't seem to be a well-optioned E-Class. I don't think it even had adaptive cruise control.

When you want to check on current traffic up ahead, you can reach over to the center touchscree-. Wait, no ... you view this mini-tablet screen thing for the COMAND system controlled via a dial knob (which has a nice, solid, tactile feel). I didn't bother using the system but now that I'm quickly reviewing a how-to on it, it seems like a nightmare to use compared to the Model S touchscreen:

It's a pretty stark difference in how traditional automakers have approached UI design compared to Silicon Valley. Guess which one gets my vote.

Unlike Tesla interiors, Mercedes has plenty of physical buttons to press which makes for an interesting contrast. In some ways, this is more convenient than the large touchscreen I've become used to, although the downside is a more cluttered design. But the physical controls tend to have a premium feel unlike many other cars which provide a more cheap, lightweight plastic experience with an odd hollow touch. The upside with Tesla's touchscreen is that controls and layout can be updated through software revision. 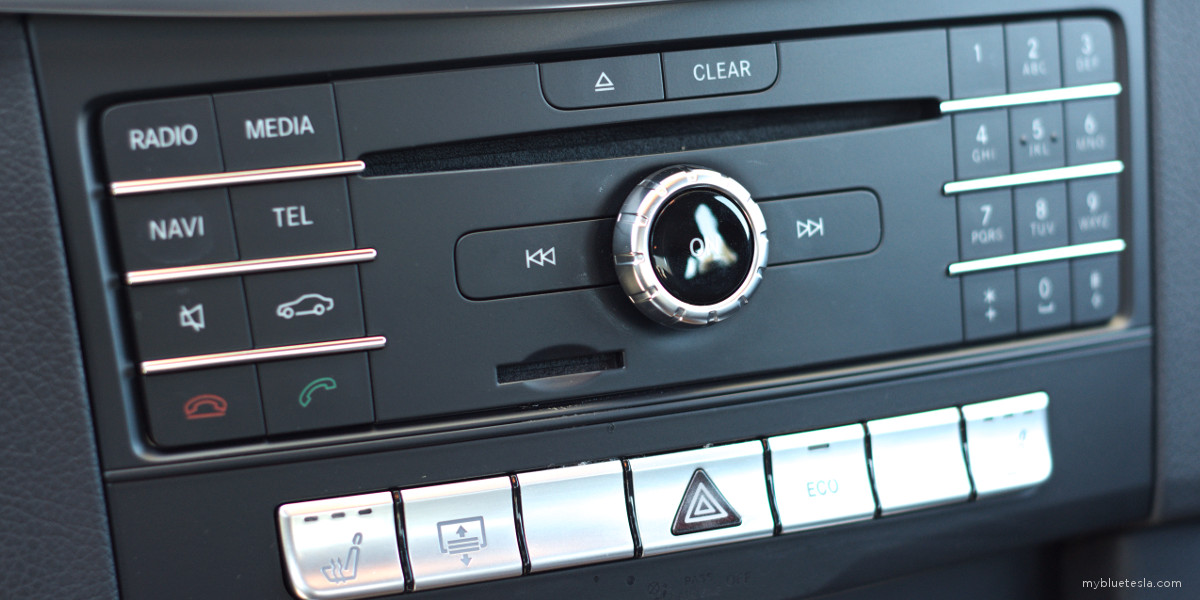 Mercedes interiors also feel better in overall cabin material quality, but I fell in love with the Tesla sense of minimalism and that for me makes up for any disadvantage Tesla has in the area of build quality.

When backing up, the rear camera display has guidelines which are more detailed and colorful than the simple white lines in Teslas. I felt that the extra colors and markers made it slightly more difficult to focus on what's behind me (perhaps this was due to the small screen size), but otherwise I think Tesla could step up their game here.

Another small detail - when you park the car, the steering wheel automatically raises to give you more room to get out of the seat. Nice touch.

But otherwise, a comfortable ride overall that still feels like 20th century technology covered with some creature comforts to make up for the gurgling internal combustion engine in front and mechanical farting noises in the back.

The invoice for tire replacement, alignment, and courtesy inspection: 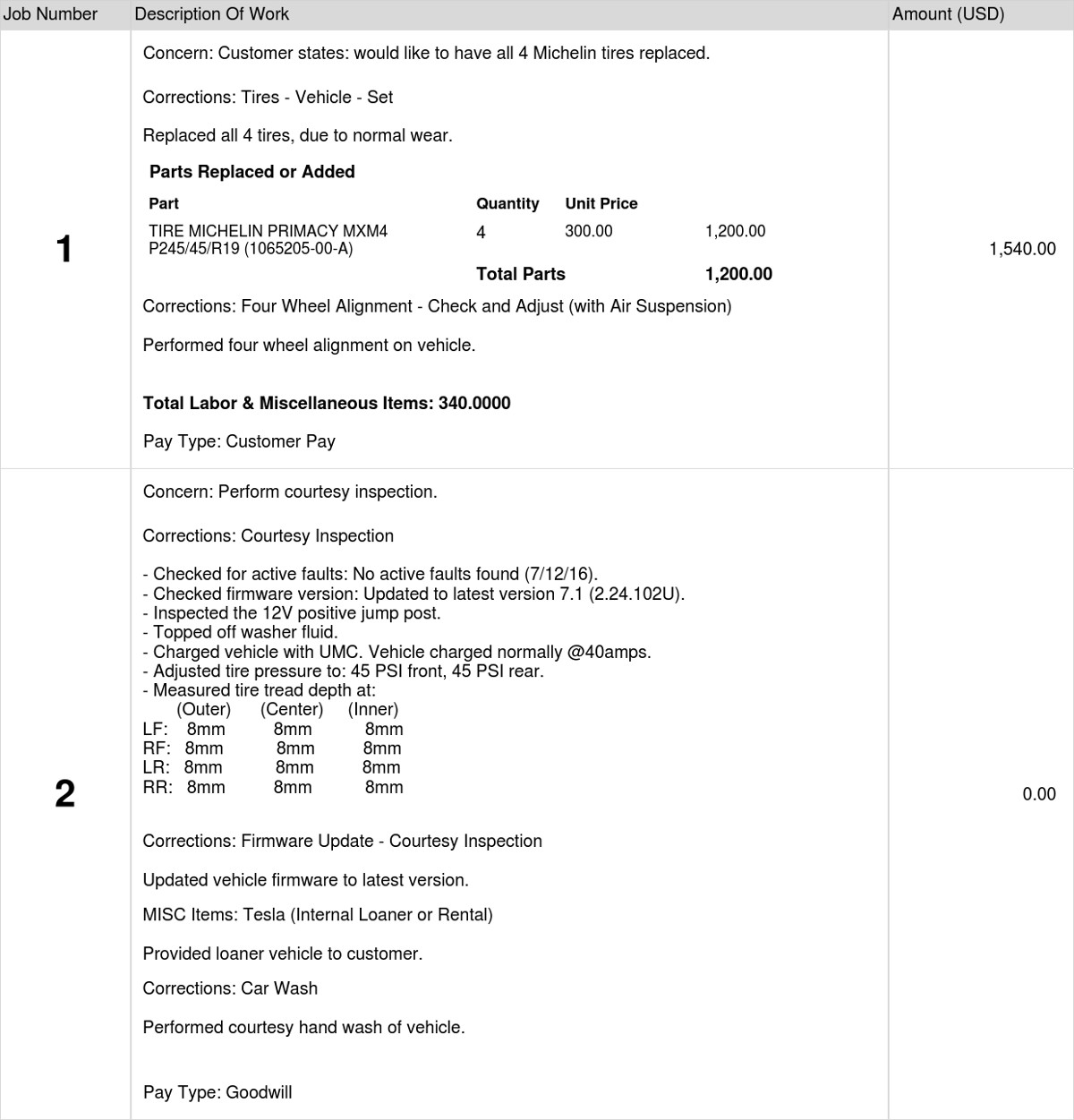