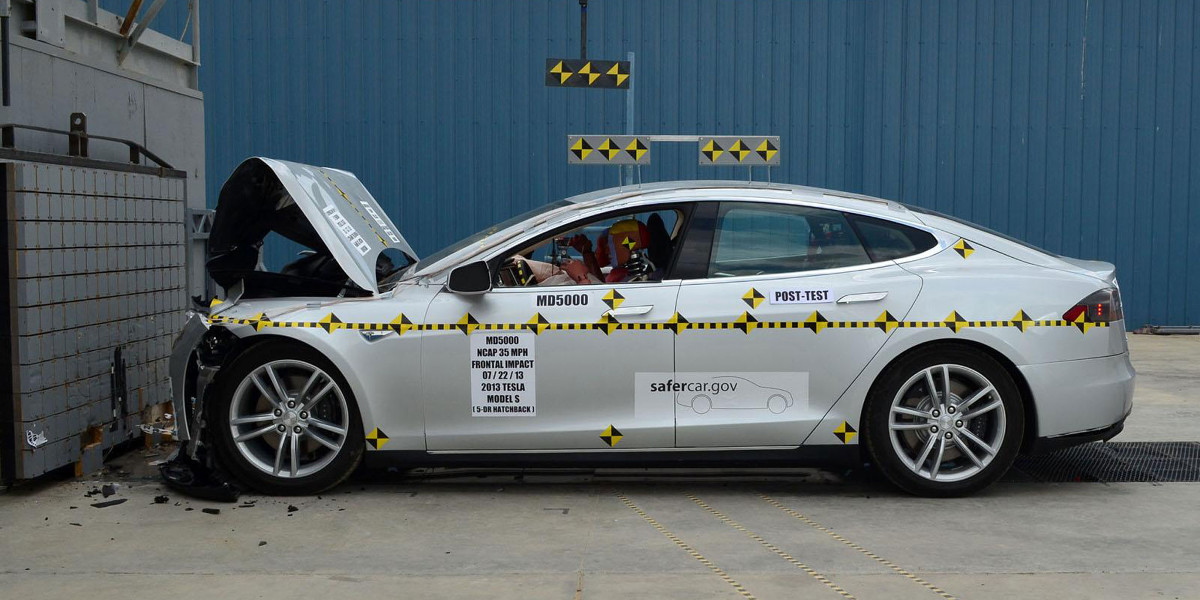 If you'll excuse the pun, the miles go by fast when driving a Tesla. Just over two years into ownership and the odometer went from 49,999 to the glorious 50,000 mark right as I was passing by Facebook's Menlo Park campus.

In October I decided to get one last warranty check for some minor interior rattles as well as water leakage in the rear tail light strip (where the backup lights are). The latter issue has been a known problem since the beginning, but I kept forgetting to have this looked into.

Tesla Service graciously fixed all of the interior rattles and in particular had to replace the entire front dash cover. Apparently this was the source of my main rattle complaint and since they didn't have the exact same part (the older, cheaper, vinyl-ish version for interiors ordered without the Extended Nappa Leather option), they provided the current equivalent. The new dash cover doesn't have the same textured surface but is smoother, provides a more refined tactile sensation, and quite nice overall. I think it also reflects off the windshield less. Although it doesn't exactly match some of the other interior panels, I consider it an upgrade.

The rear chrome brightwork on the liftgate containing the backup lights was replaced with the newer version with the sharper raised "Tesla" embossing. I'm not a huge fan of this look, but it's a minor concern in the grand scheme of things. With these part changes, my car starts looking like a Frankenstein Model S for those Tesla enthusiasts with a discerning eye.

New cabin rattles will surface in time, I'm sure, as this is one thing that a car with a lacking fit and finish will inevitably exhibit. Tesla Service has fixed me up on this a few times already, but I've resigned to the fact that my particular car won't ever be that rock-solid. I suspect newer cars off the line are better built.

The warranty service took a week and for my troubles, I was given an Infiniti Q35 as a loaner. As a side rant, if this is what all Infinitis drive like ... I won't be ever buying one of their cars. My 16-year old VW is even more fun to drive.

Last month, just around 49,900 miles, I started noticing a little bit of extra wind noise from the driver's side window. I decided to call in one last warranty service and told Service that my warranty's at edge of falling off a cliff. They took note of this (as referenced in the invoice) and right before Thanksgiving I pulled into the Fremont Service Center and took a quick drive with a technician who confirmed what I was hearing. He had a feeling as to what was causing it.

As he suspected, it turned out to be a loose cover for the door handle mechanism inside the door panel. This is apparently a known problem and they knew exactly how to fix it. The warranty service took about a day and in the meantime I was given the keys to a Hertz rental, a Hyundai Santa Fe Sport. Again, I shall invoke my Tesla-snob and look down upon this ICE and sigh with suppressed disgust. 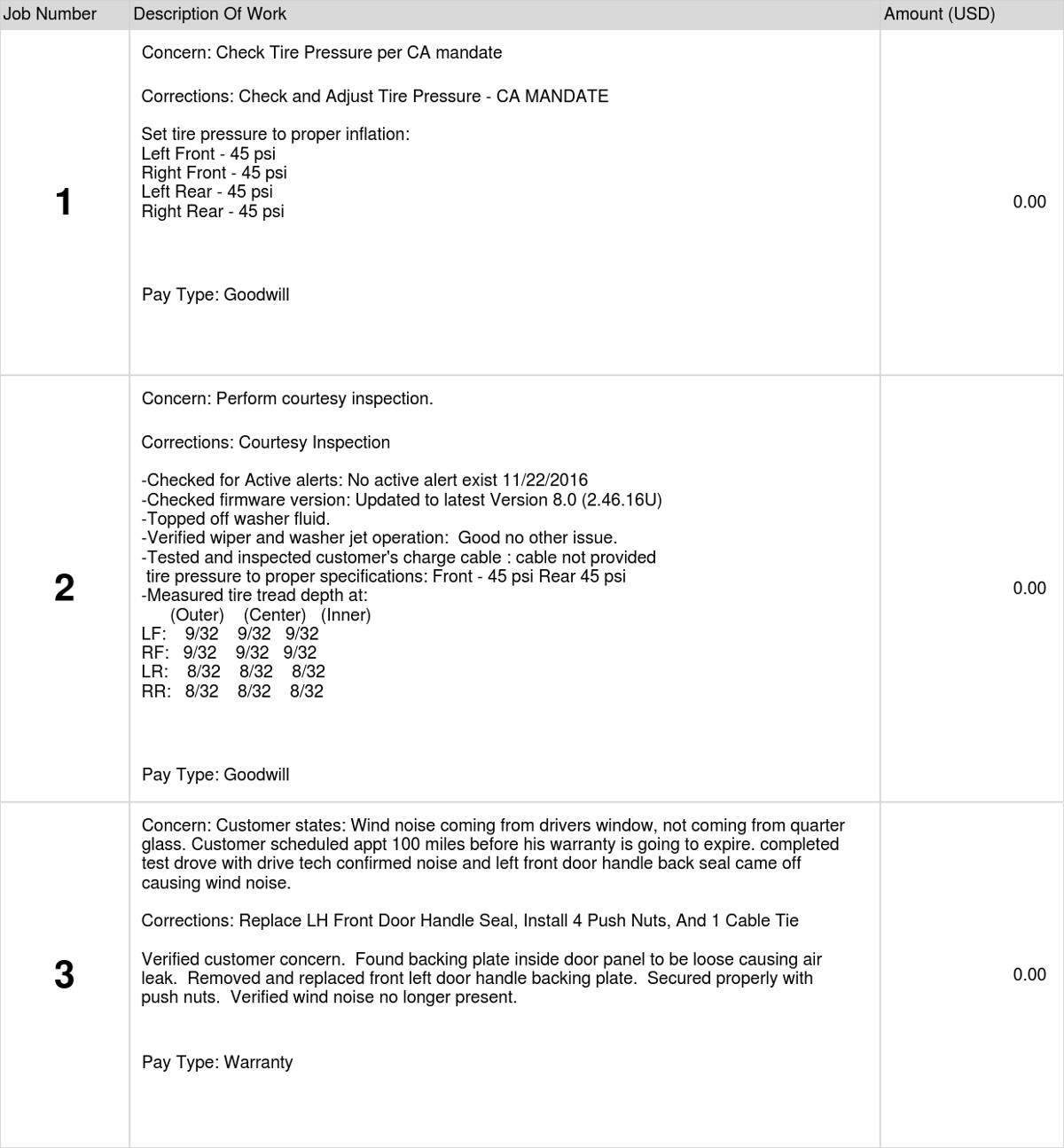 There's always the eventual self-debate about purchasing extended warranties. The normal advice is to disregard them since they tend to offer little in regards to the likelihood of covering what actually ends up needing repairs, but Tesla is a special case. While the sales argument for buying a Tesla is that it has "less moving parts" the reality is that the statement only considers traditional mechanical components. The software is the significant complex variable. It's not exactly open source software either.

For one thing, the only place that can (competently) work on Tesla vehicles is, well, a Tesla Service Center with Tesla-trained technicians. Your average auto repair facility isn't going to be able to diagnose the software nor have access to parts. I can't just run by AutoZone and pick up a replacement door handle. Perhaps brakes, tires, and suspension can be handled by third-party shops, but seems like everything else requires a certain specialization that only Tesla can provide.

With that in mind, parts from Tesla aren't cheap (nor the labor). The infamous door handles alone are known to be a whopping $1,000 each. The center touchscreen (MCU) is roughly $4,000. I've had one touchscreen replacement and one door handle replacement in two years, and while some will say that electronic components either fail early or never fail, I'm left with lingering doubts with a car containing expensive accoutrements which aren't exactly off-the-shelf at O'Reilly.

I decided against buying the Extended Service Agreement. If I end up driving the same amount in the next 2 years as I did in the previous 2, that ESA would be only good for 2 years, perhaps less. Plus the warranty service itself would entail a $200 deductible per part. It adds up fast. This is the risk for being a relatively early adopter of cutting edge technology.

So I'll take my chances. Knowing my luck, a few months from now I'll have another catastrophic failure involving the touchscreen again. At least the motor and battery are covered for another 6 years with no mileage limit.