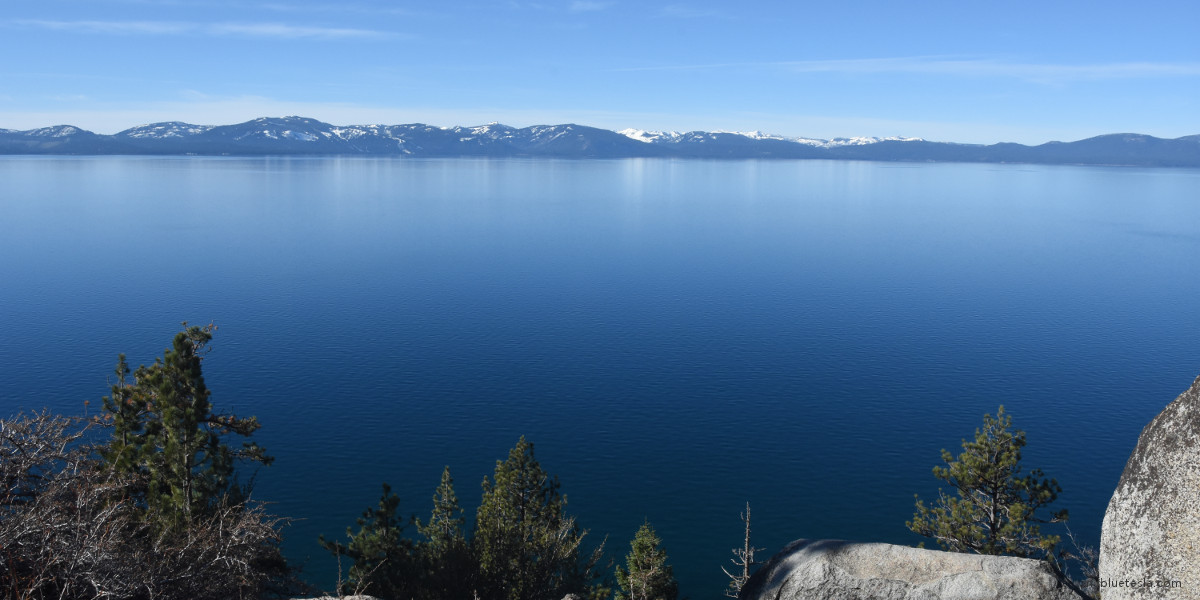 It's been 15 years since I've driven in the snow, and that was with my roommate's car when I took a short day trip to Yosemite. After browsing the Tesla Supercharger map looking for destination chargers at potentially interesting places to visit, I decided to head to The Landing Resort & Spa in South Lake Tahoe which seemed ideally situated with a Tesla Wall Connector. And if for whatever reason that wasn't enough, a Supercharger was literally a few minutes away right across the Nevada state line.

While ski season isn't in full effect yet, there's still some snow so I needed chains. I paid for the (very) premium-priced Tesla chains made by Trak Sport. After looking at a few install videos, I noticed that the package I received didn't contain the extra sockets, spanners, or knob studs. Based on a test fitting in the garage, it looked like what I had was enough though. The owner's manual in the shipment didn't even mention the extra parts. Perhaps this is Telsa's way of saving money.

On the drive from the San Francisco Bay Area to Lake Tahoe, I stopped by the Folsom Supercharger near Sacramento. While in theory I could get to The Landing non-stop, given the elevation climb and the colder weather I decided better safe than sorry. The Folsom Supercharger is located right in the middle of a large outdoor shopping area so there's plenty to do if charging is going to take a while. 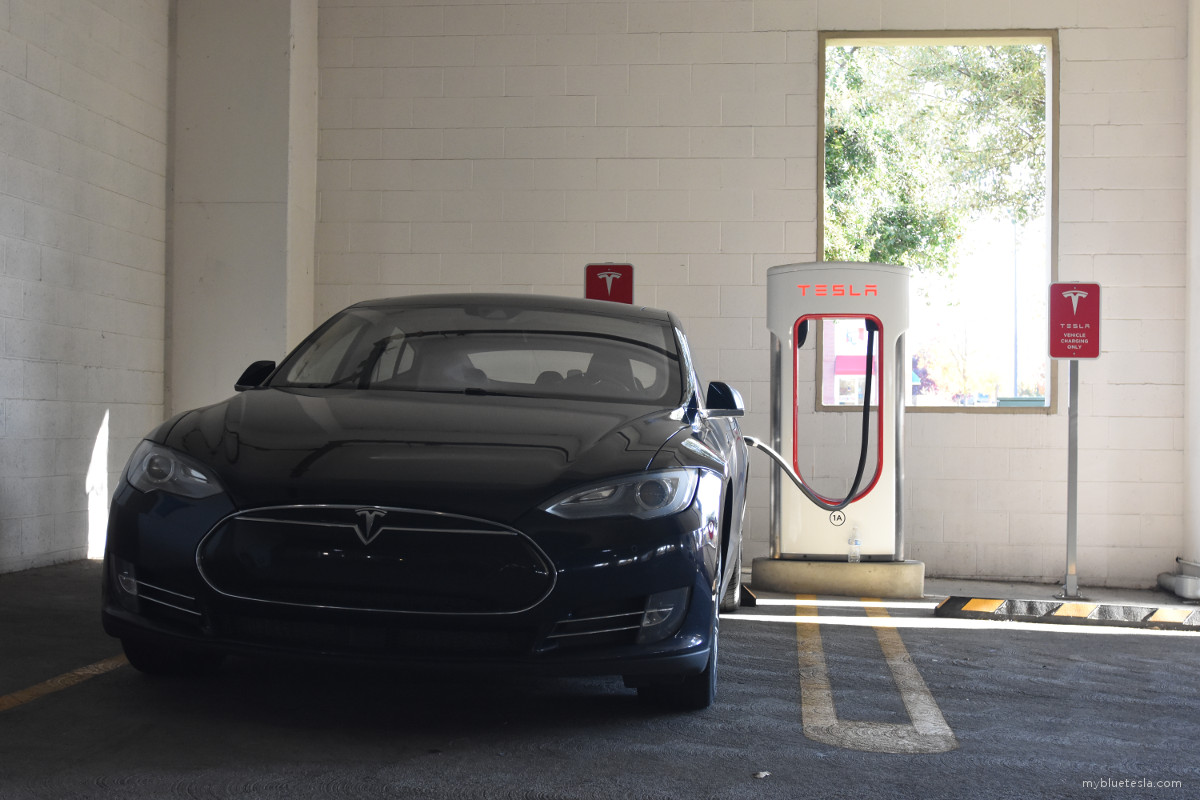 The trip into Lake Tahoe involved plenty of twisty roads while climbing above 7000 feet. No chains were needed that day, but it was the first time I've seen the outside temperature drop into the 30s during the late afternoon. Heated seats to the rescue. I made it to The Landing with plenty of range to spare. Tesla's Supercharger map indicates that the Wall Connector here is available via valet, although I just asked if I could plug in myself. 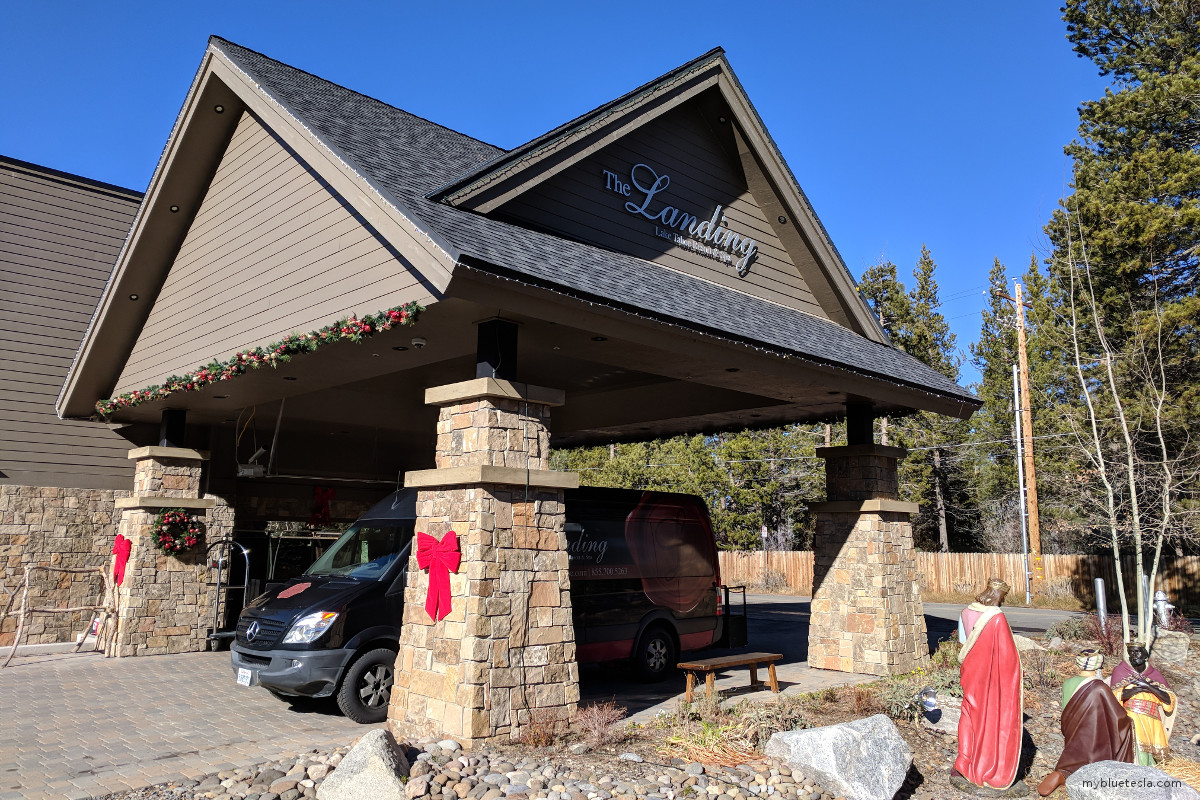 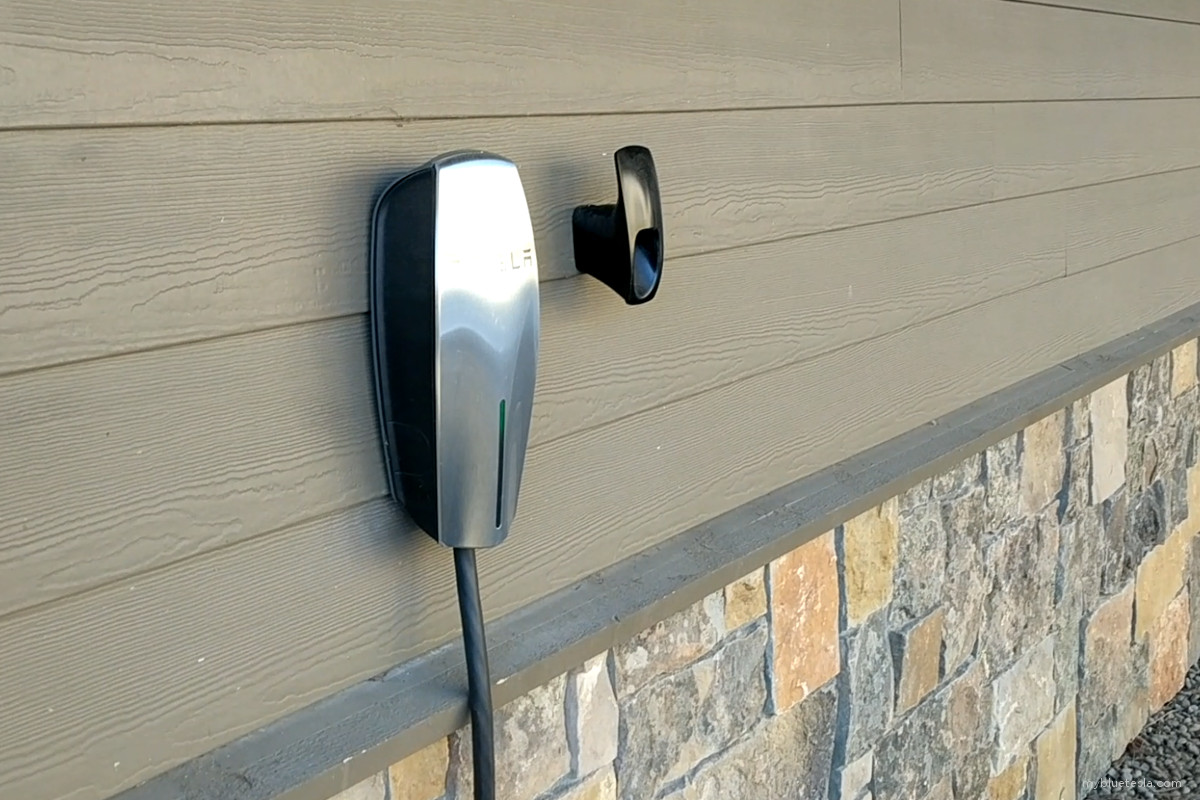 If you're looking for a quick getaway, this boutique resort provides a great view of the lake (assuming you reserve the Superior Lake Room) without the fuss of typical mainstream accommodations. 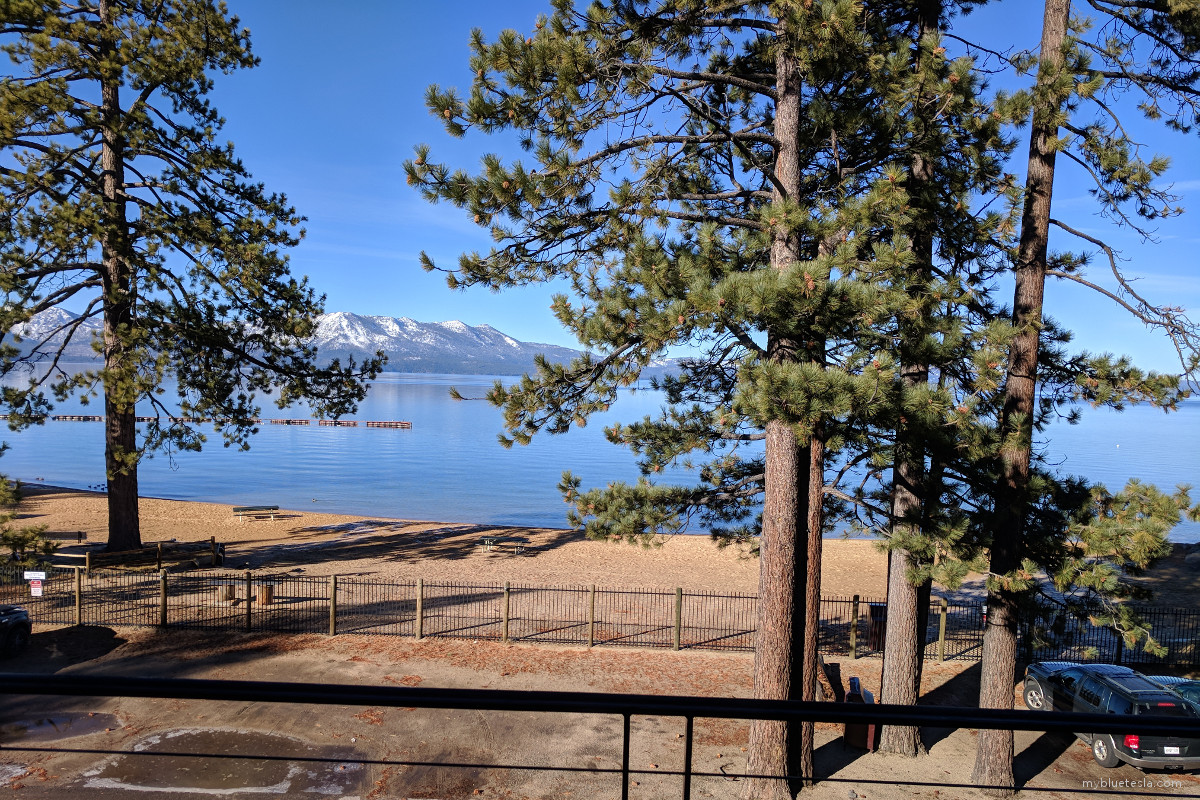 The resort's restaurant (Jimmy's) is on the upscale side with an impressive wine bar. Good desserts as well: 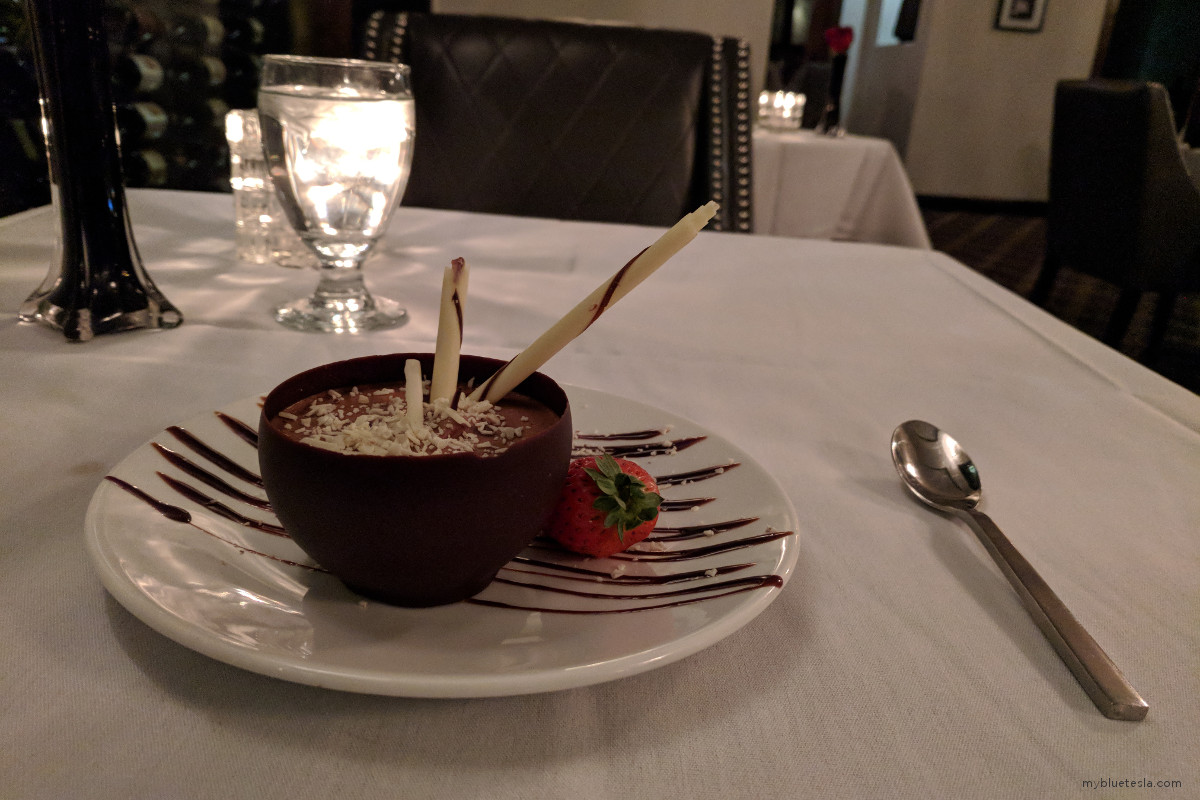 During my stay I decided to quickly check out the nearby Supercharger, located across the Nevada state line in the Hard Rock Hotel & Casino parking garage. The Landing is right on the street named Stateline Avenue. It's literally like a 4-minute drive to the Supercharger. I was the only occupant when I arrived, but to be fair this was a very slow week in Lake Tahoe (right after Thanksgiving, and not yet quite enough snow for the skiing tourists to flood the town). 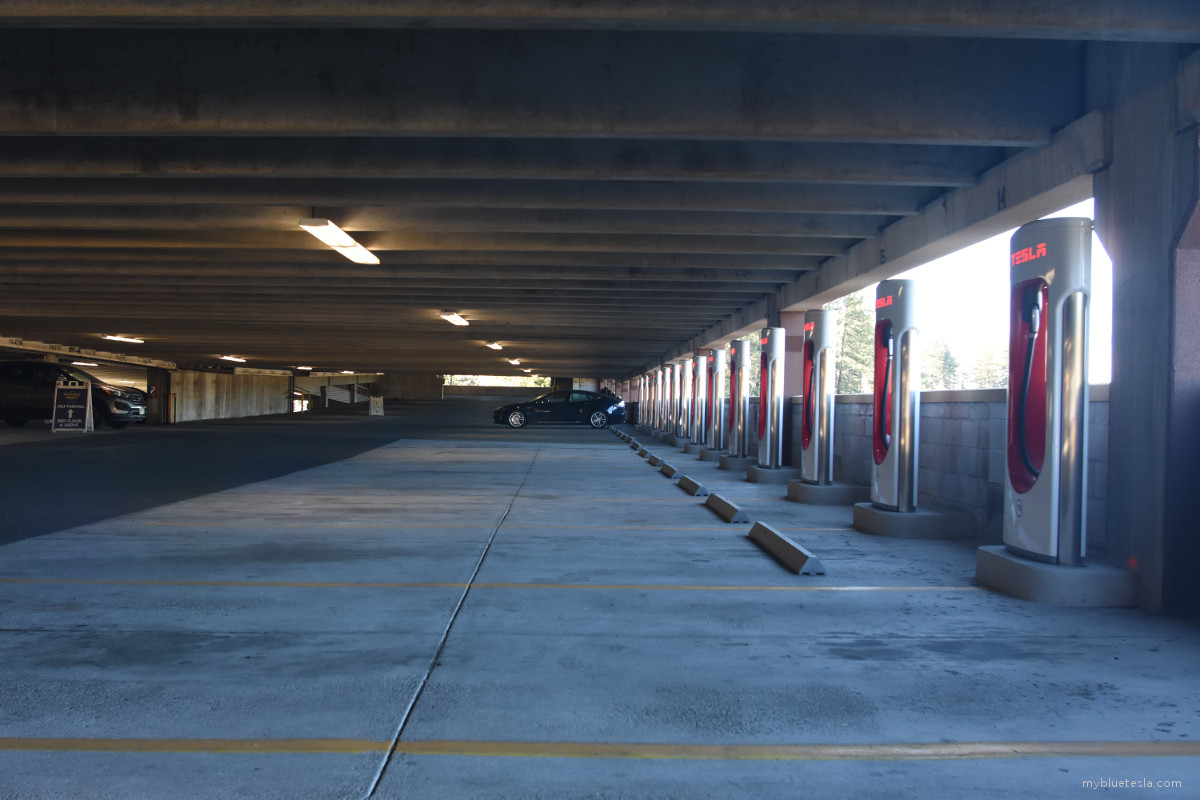 It reached below-freezing during the night and for the first time in its life, my Model S experienced some frost. 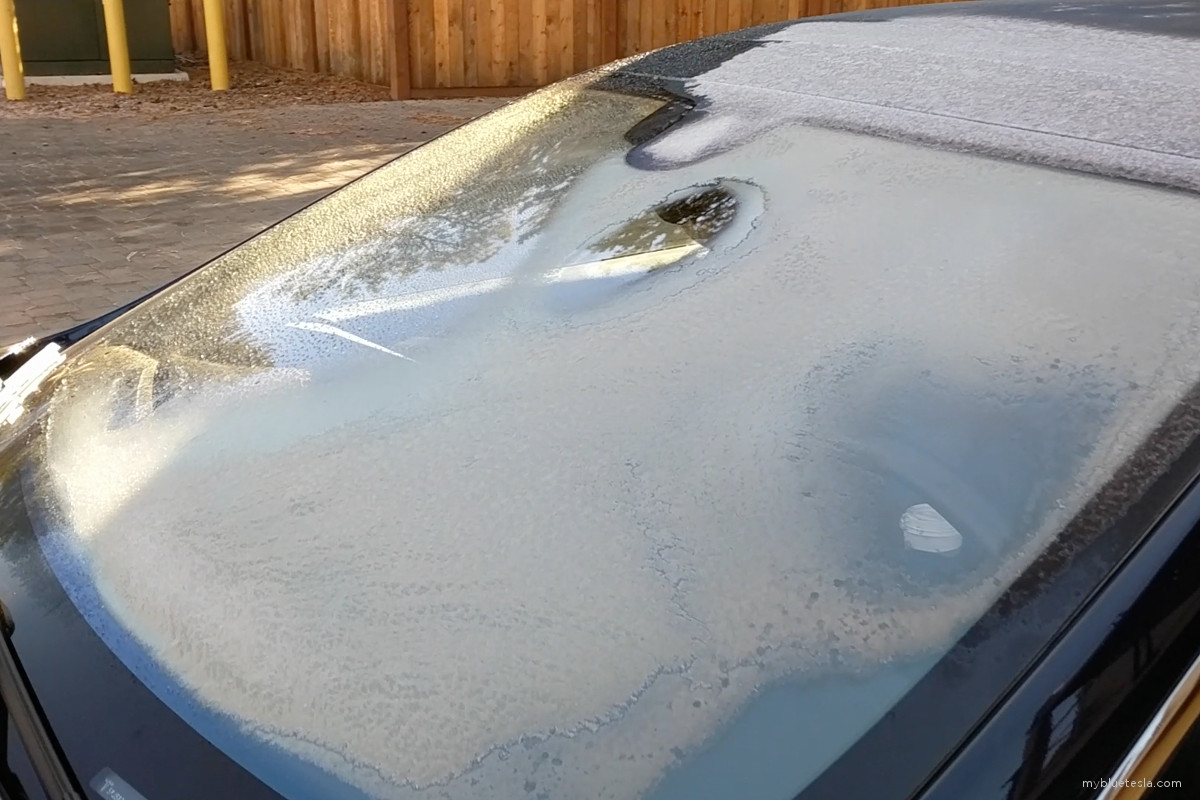 After a short breakfast at Jimmy's and admiring the great mountain view, the drive home was rather uneventful. I stopped by the Folsom Supercharger again since a direct path home would cut the range buffer a bit close. As I had never charged to 100% before, I decided to see what this would be like.

I noticed that my previous 30 miles of travel efficiency was at 123 Wh/mile. I'd say that's pretty good! Admittedly, the vast majority of those miles were downhill cruising. 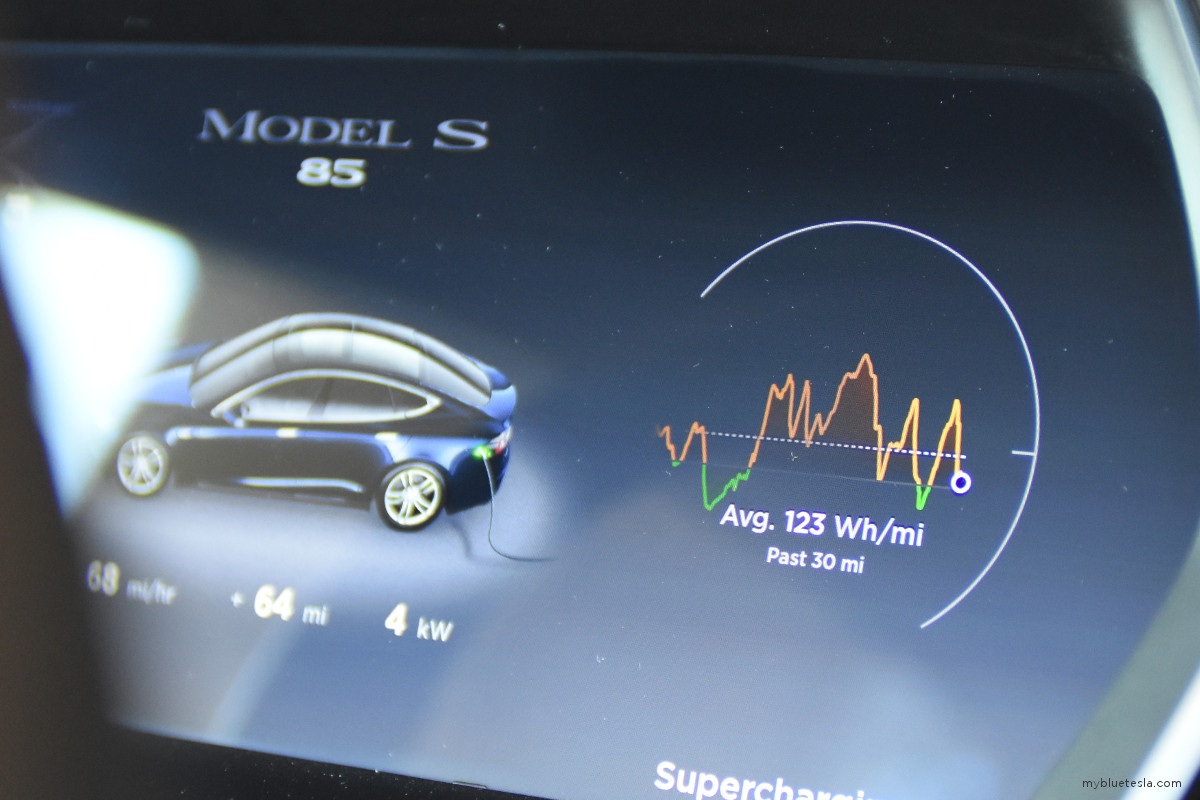 Similar to Tesla Service who always promise a callback but never do, the charge timer calculator would optimistically over-promise the number of minutes remaining to a full capacity. I expected the rate to slow down considerably, but as I surpassed 95% the calculator kept estimating another 10 minutes to completion. It did this for about 20 minutes. Then for another 15 minutes, it kept estimating another 5 minutes.

This trickle-charge experience really tests your patience. I got to what seemed like 99% with 251 miles of EPA-rated range and a charge rate of 2 kW when I decided I had enough and pulled the plug. There are better things to do in life than wait out the novelty of getting that last drop in. 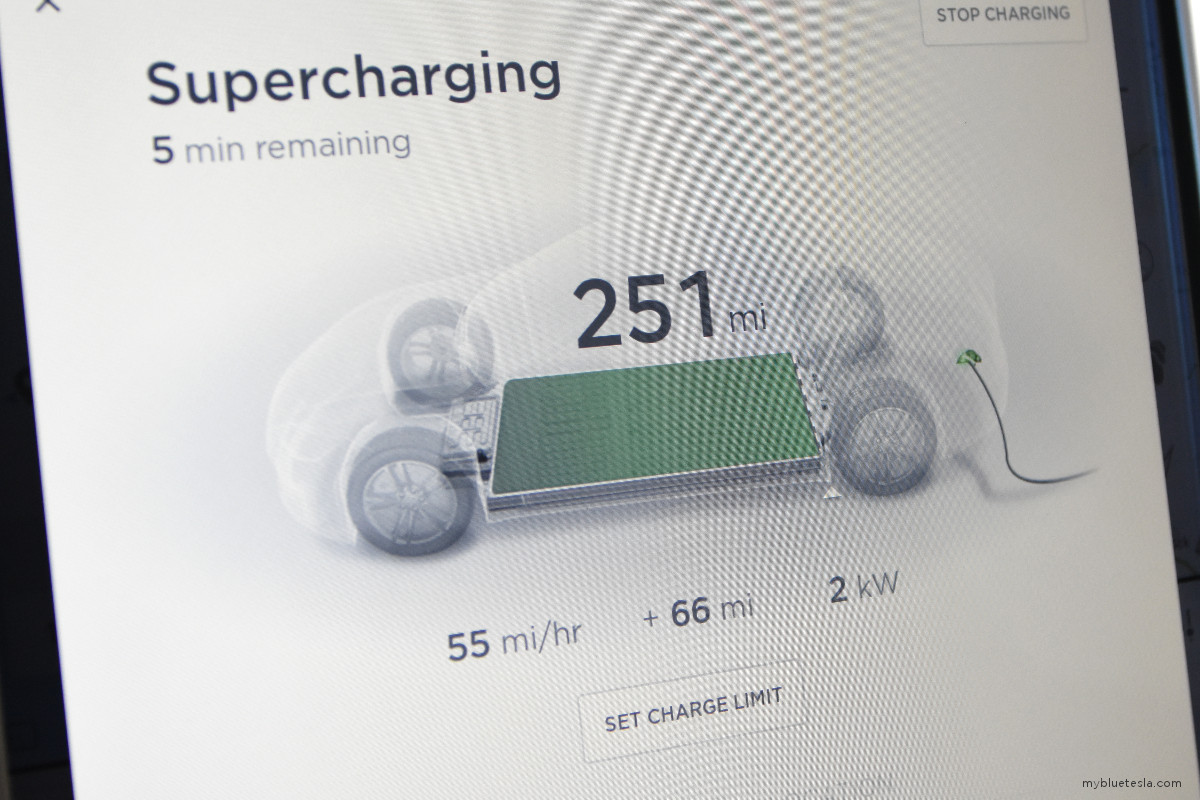 If we assume that this state-of-charge calculation is indeed accurate regarding battery capacity (and from what I've read, this isn't necessarily easy to determine due to a number of varying factors), 251 miles max-capacity means a 5 - 6% battery capacity degradation in the last 3 years. This is in line with what many other Tesla owners have reported. The rate of degradation should slow to a crawl from here on out, which means I'll be driving this car for at least another 7 years if not longer.

When your battery is at or near full, regen is severely restricted since you don't want to over-feed the battery. As I was making my way to the freeway it seemed like regen was non-existent. You realize how heavy the car is when the physical brakes are being regularly relied upon.

In the end, this turned out to be less of a "snow" trip that I thought it'd be. I would have needed snow chains if I had driven one day earlier, but I lucked out with my timing this year.