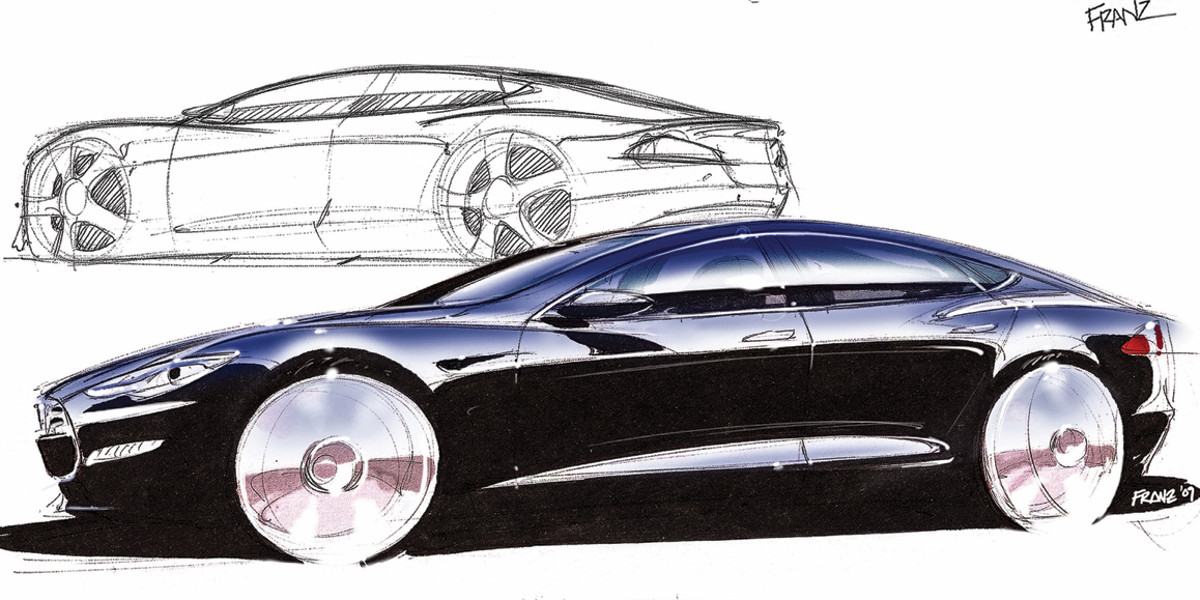 When I first ordered my car, I was very, very close to ticking the option for the 21" Turbines. Common sense got the better of me and I relented to the more comfortable ride, better range efficiency, lower cost, and extended tread life. Standard wheels it was. Fast forward to April this year, I finally had a chance to purchase a set of second-hand Turbines. I gave into the Dark Side of The Force. These weren't in super-pristine condition but considering they came with fresh tires and the face of the wheels had almost no noticeable defects (at least from 10 feet away), it was a pretty good bargain especially since the seller who is also a TMC forum member was half an hour away.

The large-wheel look has always been important to me since I'm a big fan of concept cars. They remind me of science fiction futures that I spent my childhood watching on TV (the flying car has yet to arrive, by the way). While I think the standard 19" double-spoke wheels look fine and I prefer them over the newer Slipstreams (or even the older Cyclones), I've always lusted after the larger size. Many Tesla owners have struck that balance between size and practicality by going with aftermarket 20" wheels. I think those are an improvement, but I can easily tell the difference between 20" and 21" - I know what I want and the middle ground isn't going to make me happy.

So in this case, size does matter. It's unfortunate that these tires wear out so fast and I must become much more diligent of surface imperfections (potholes).

This weekend I finally had some spare hours to clean up the wheels and apply two layers of Gloss Coat. This should help prevent brake dust from sticking, making washing much easier. I've seen dirty gray Turbines and they don't look so good. The silver Turbines I can handle when they're a bit dirty, but for some reason the darker rims just get uglier faster when they haven't been washed for a while.

The first step was a basic cleaning with Optimum No Rinse and then a quick pass with Optimum Paint Prep to ensure any remaining oils, leftover wax, or other fillers were removed so Gloss Coat could bond with the surface without interference for max durability. 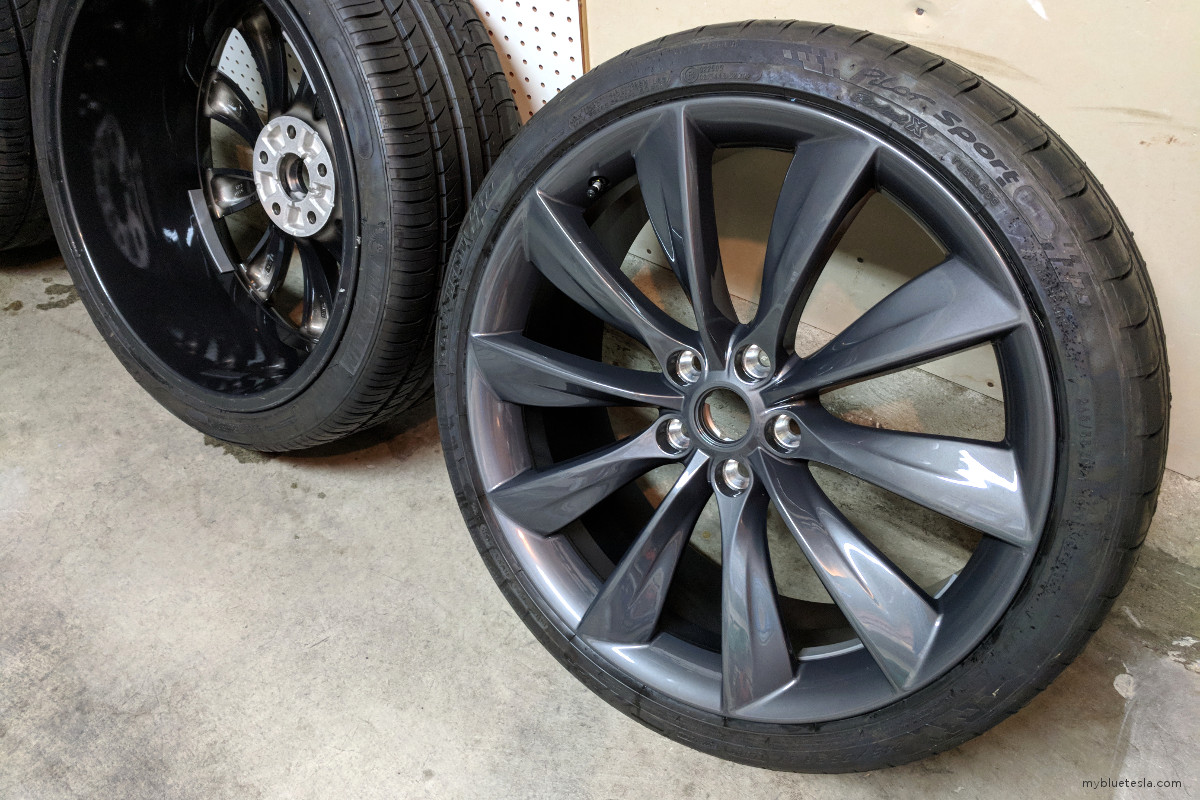 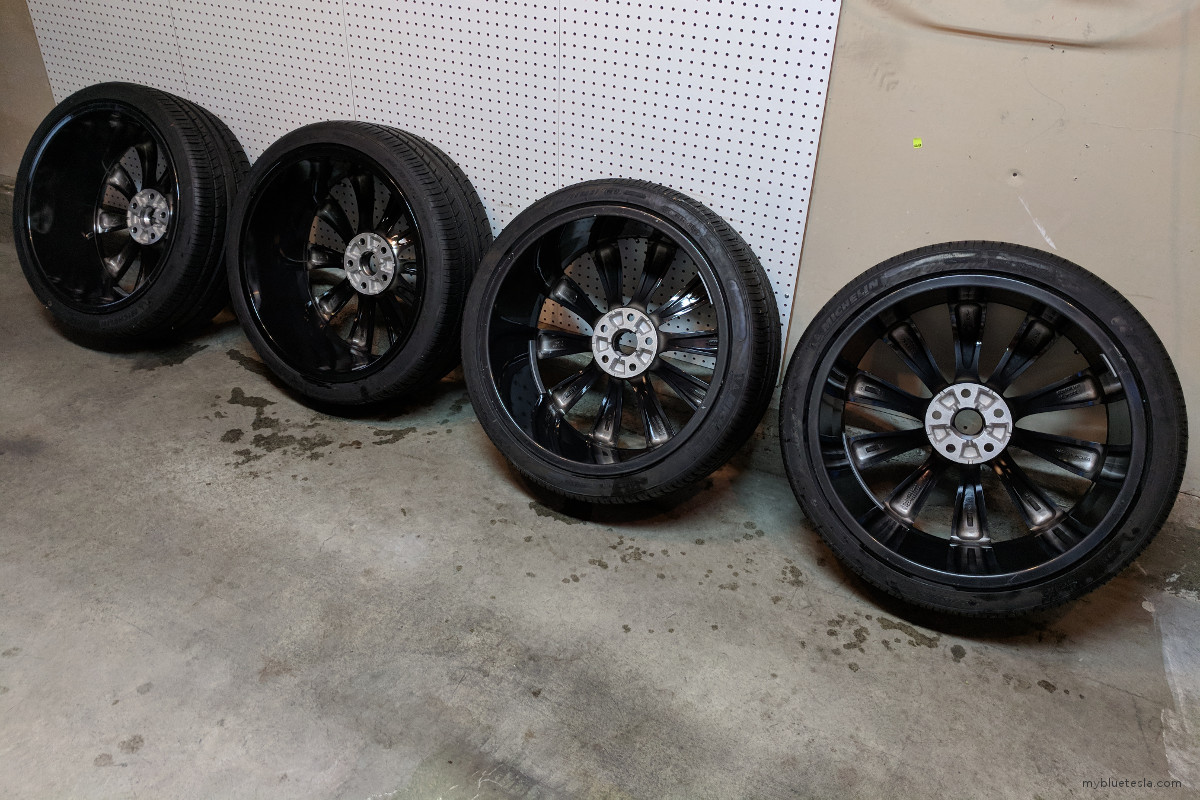 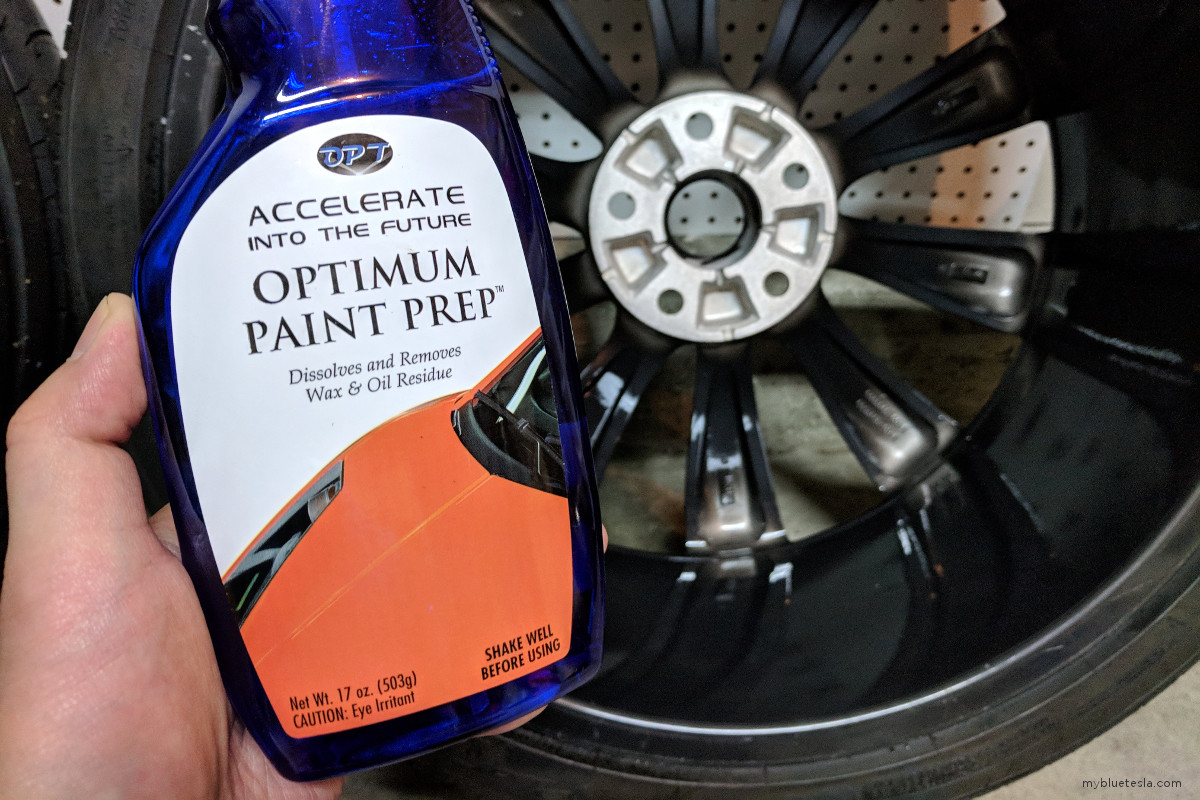 Since these wheels are second-hand and they've been slightly used (and shuffled around in a garage/storage by the previous owner), there are some scuff marks and swirls in various areas including the spokes. Most of the scuffs are on the back lip of the rim which will not be visible when mounted. I debated whether I should do the right thing by breaking out the random orbital polisher and buffing out the imperfections but my impatience got the upper hand. I didn't even bother cleaning the tires, washing the rims with APC, or decontaminating with FerreX. I'll probably end up curb-rashing these at some point anyway knowing my luck. 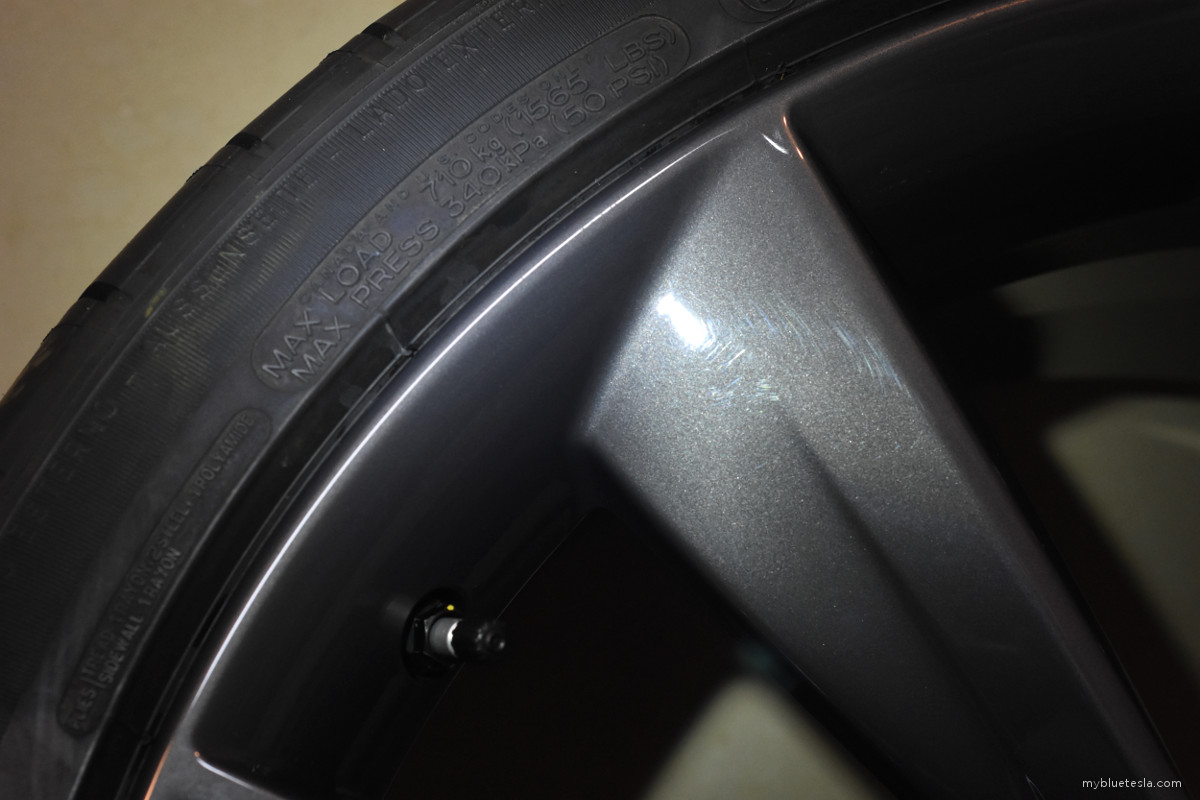 Gloss Coat adds a "hard" micro-thin protective layer so if I want to do any paint correction after the coating is on, I'd have to polish through the coating to eliminate the swirls in the clear coat. I figure the coating will last about a couple of years at which point I can decide whether to go through the trouble. I want to start rolling in my space car now. 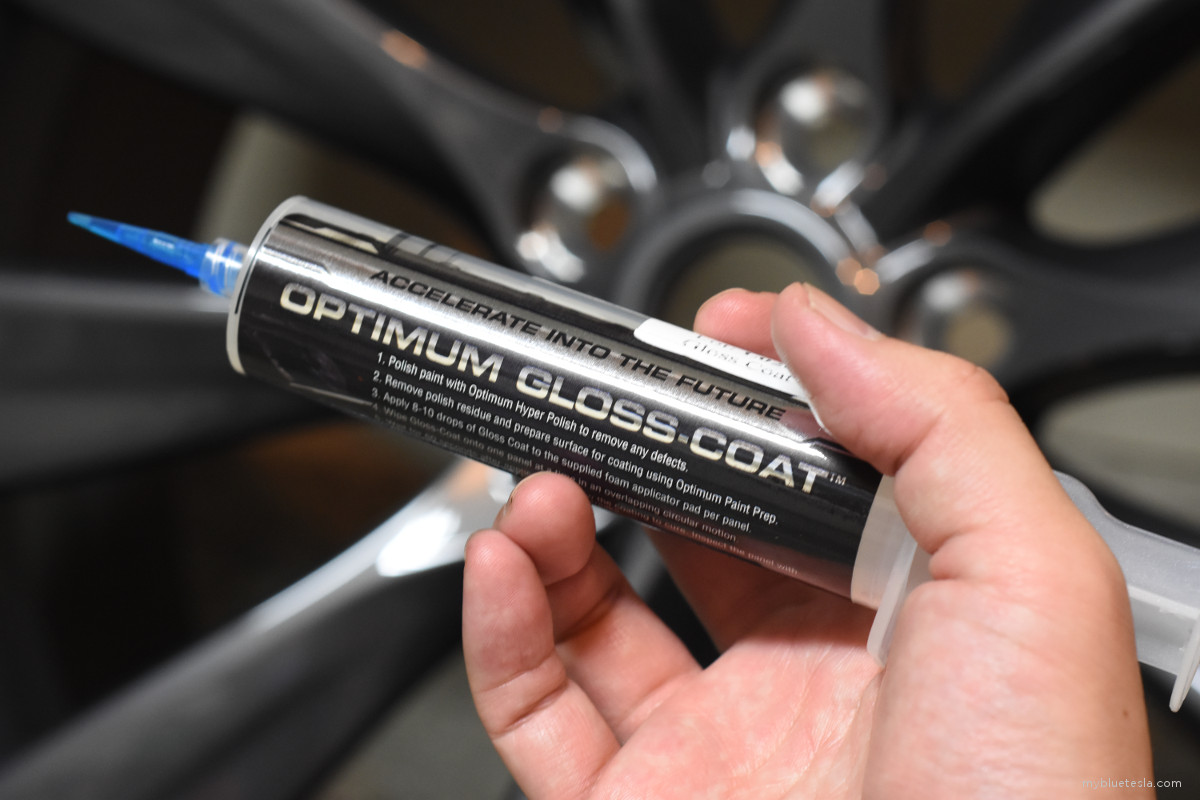 I went the extra mile and coated the plastic lug nut covers. If I'm paying almost $50 for a 10 cc (0.34 oz) syringe of Gloss Coat, I'm applying it to everything. 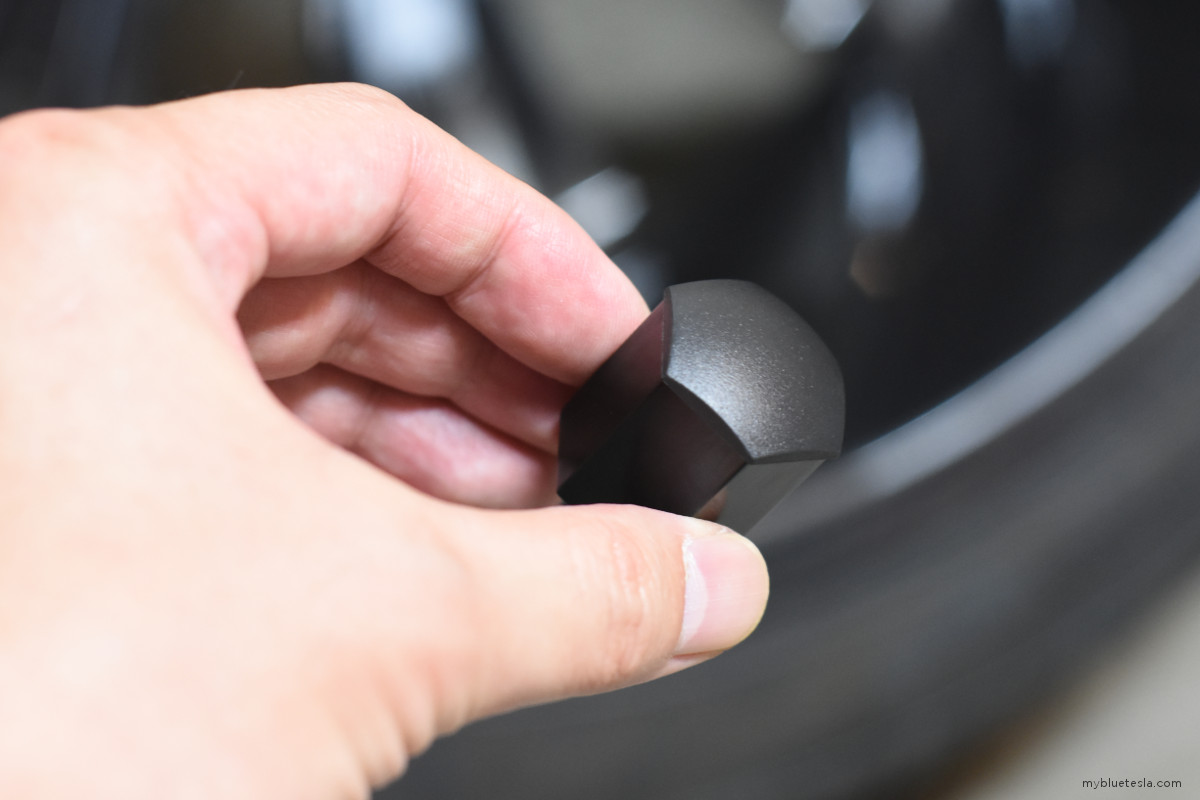 I also swapped out the existing lug nuts with the new ones I purchased since the original type is apparently "soft" and a Service Center tech informed me they're proactively swapping out customers' during service visits for this reason. Other people have mentioned that after a few cycles of installing/removing them, they start deforming just enough where a 21mm socket won't easily seat properly anymore. I noticed the same thing on a couple of mine as I was doing the final removal today and you can see the marks below. 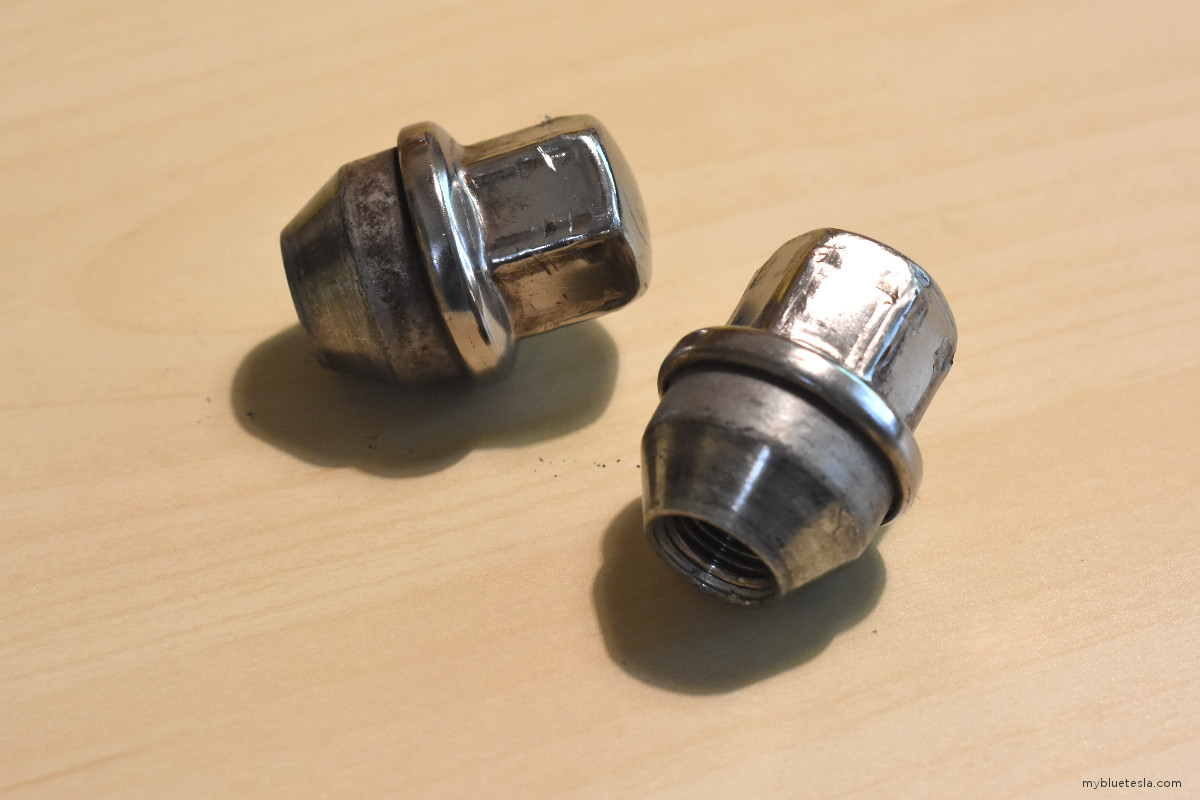 The new version meant to be capped by a plastic cover. 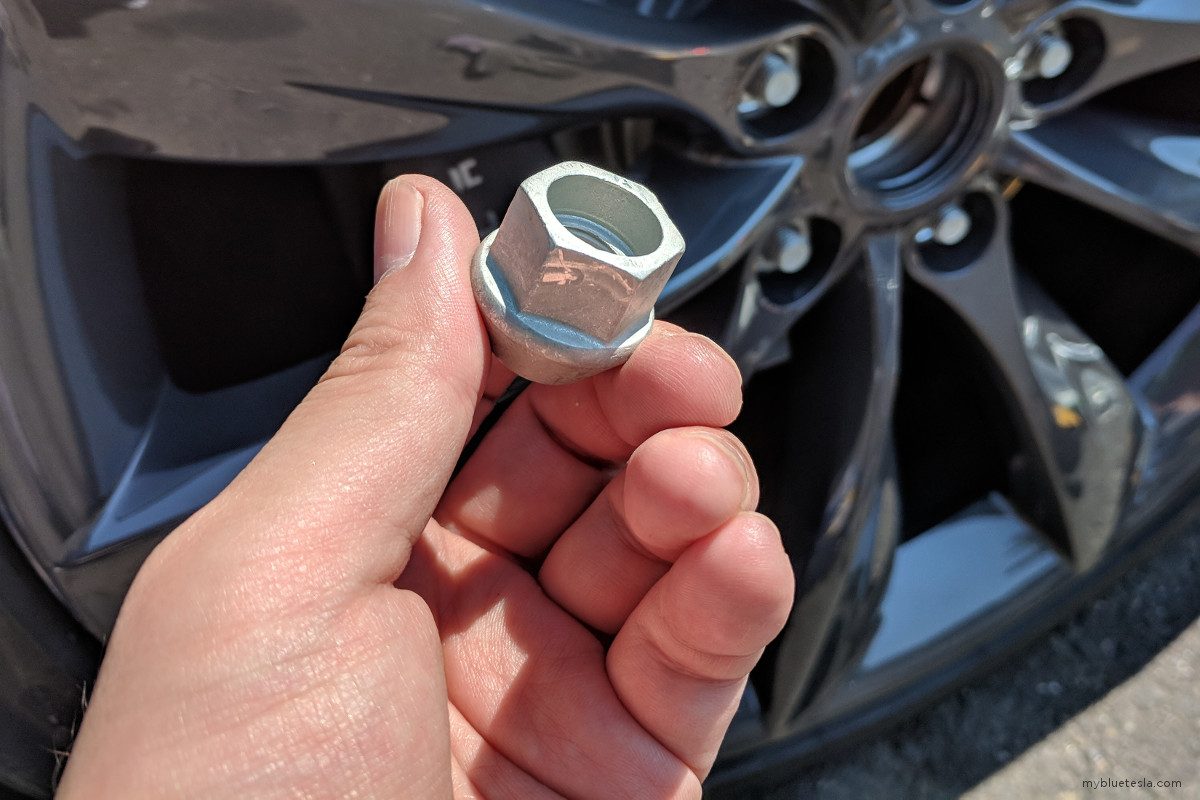 I still have plenty of Gloss Coat left in the syringe so I'll probably coat the 19" wheels another day.

Right after installation (at 90,279 miles on the odometer) I ran over to the local gas station to "charge" the tires with some air since each had maybe 30 psi. A few miles after on the way home I got a TPMS notification which I had never seen before: 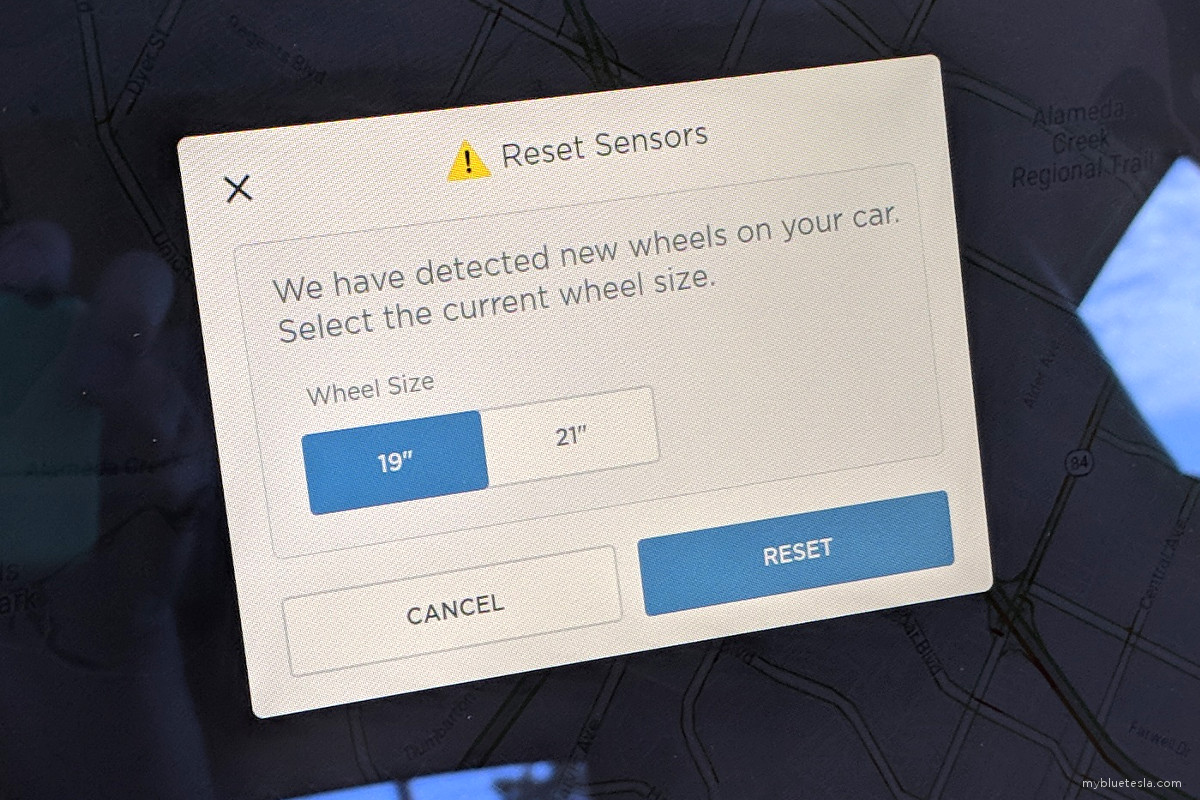 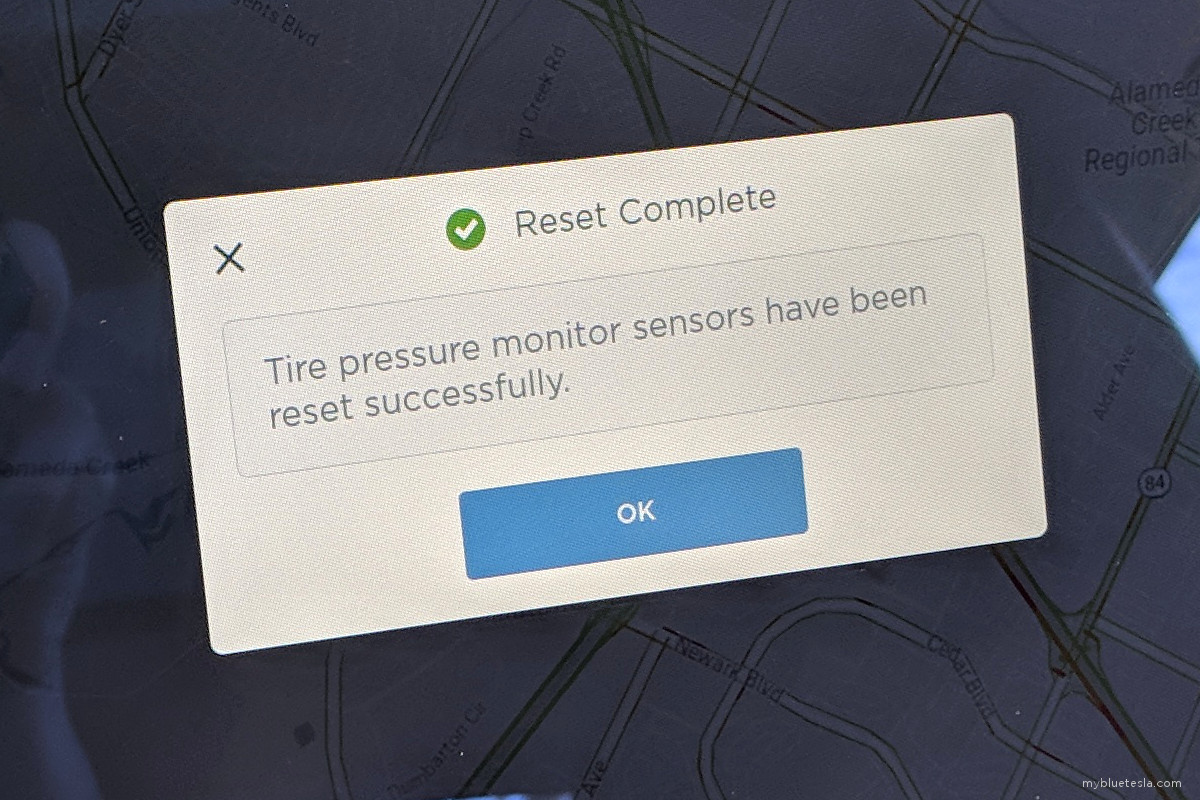 I still have to call Tesla and ask them to update my car's config so the Model S image on my screen will display the new Turbines.

So far in my limited amount of driving on these new wheels/tires, I haven't noticed a massive change in feel/comfort/noise. There's a little bit of extra road noise that I don't think occurs with the standard wheels. The handling or steering feel hasn't changed enough to feel like a 911. Overall I was expecting a harsher ride but it's not quite obvious to me yet. Time will tell whether I'll keep these on full-time or just use them during the warmer seasons.

Like fashionable sports shoes (or dress shoes when paired with a business suit), wheels provide a certain kind of aesthetic grounding. For me, it makes or breaks the look of the overall car. The Tesla Turbines I feel are very attractively designed and I'd take them over the newer Twin Turbines. That said, I think my car's updated look could use a slight extra boost with some spacers to get the wheels flush with the fender. Whether this is something I'll actually do and/or how much of a safety issue it raises is another question. I haven't had problems with spacers on my previous car, but that one also weighed a ton less.

There's a part of me that also wants a set of silver Turbines. Maybe staggered? I'm not a huge fan of the all-black look like the Sonic Carbon color. I debated between the gray and silver versions for a long time. Even though the gray looks killer, silver is sharp with a classic look. I just don't have the storage space to accommodate 3 sets of wheels in the garage. First world problems.

At least for now, ready for lift-off: 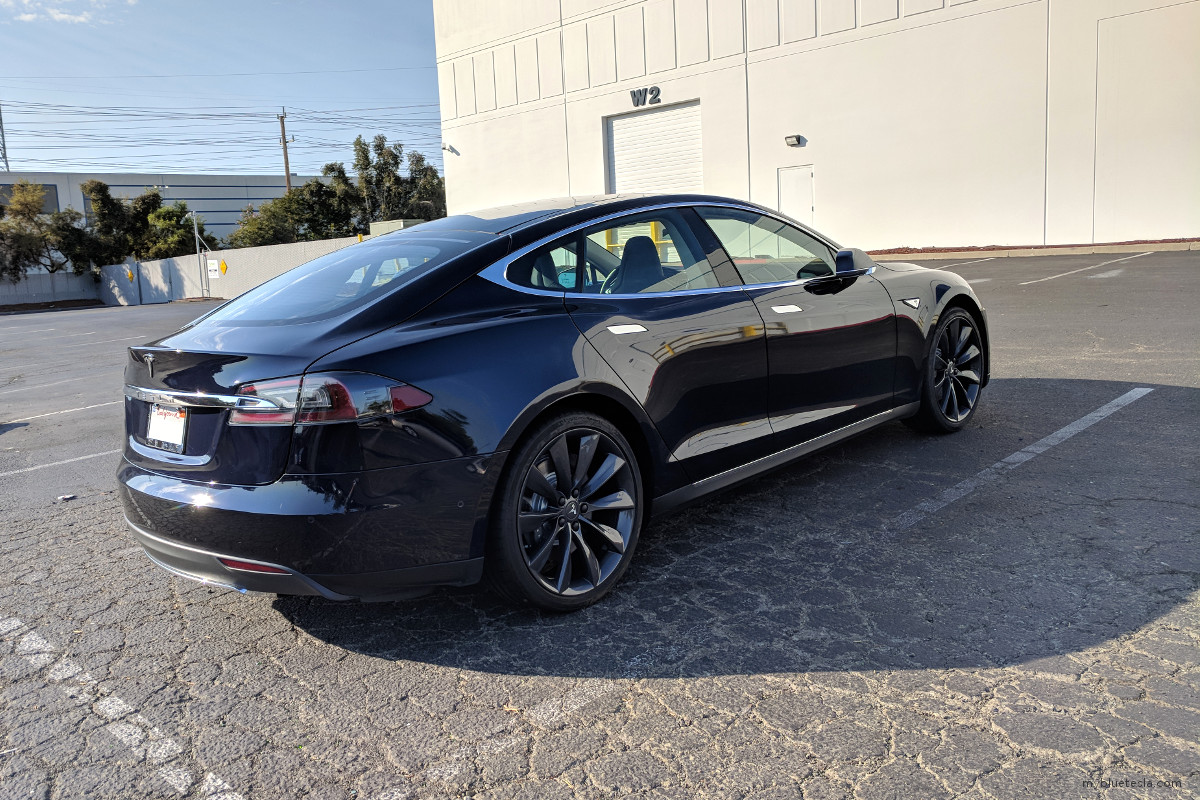 I'm not looking forward to the inevitable tire change at 105k which I'll likely hit later this year or early next year.