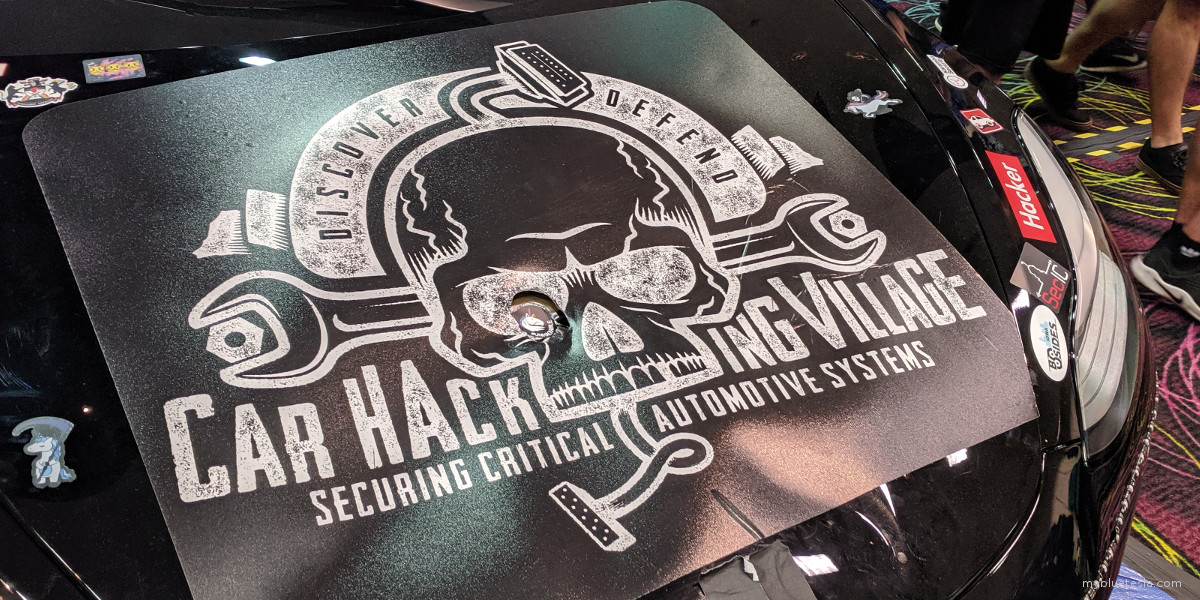 I've missed out on the annual hacker/cybersecurity conference for 2 years in a row so it was time to make up for it with a trip down to Las Vegas. This year the conference spanned 4 hotels across Paris, Bally’s, Planet Hollywood, and Flamingo. I began the drive from the SF Bay Area around 3 in the morning.

I briefly stopped at Gilroy since the Hollister Supercharger appeared down on the map (maybe maintenance or V3 upgrade?). From there it was a 2-hour cruise to Kettleman City. The sun was quietly rising when I arrived before the baristas and other employees were on the scene. 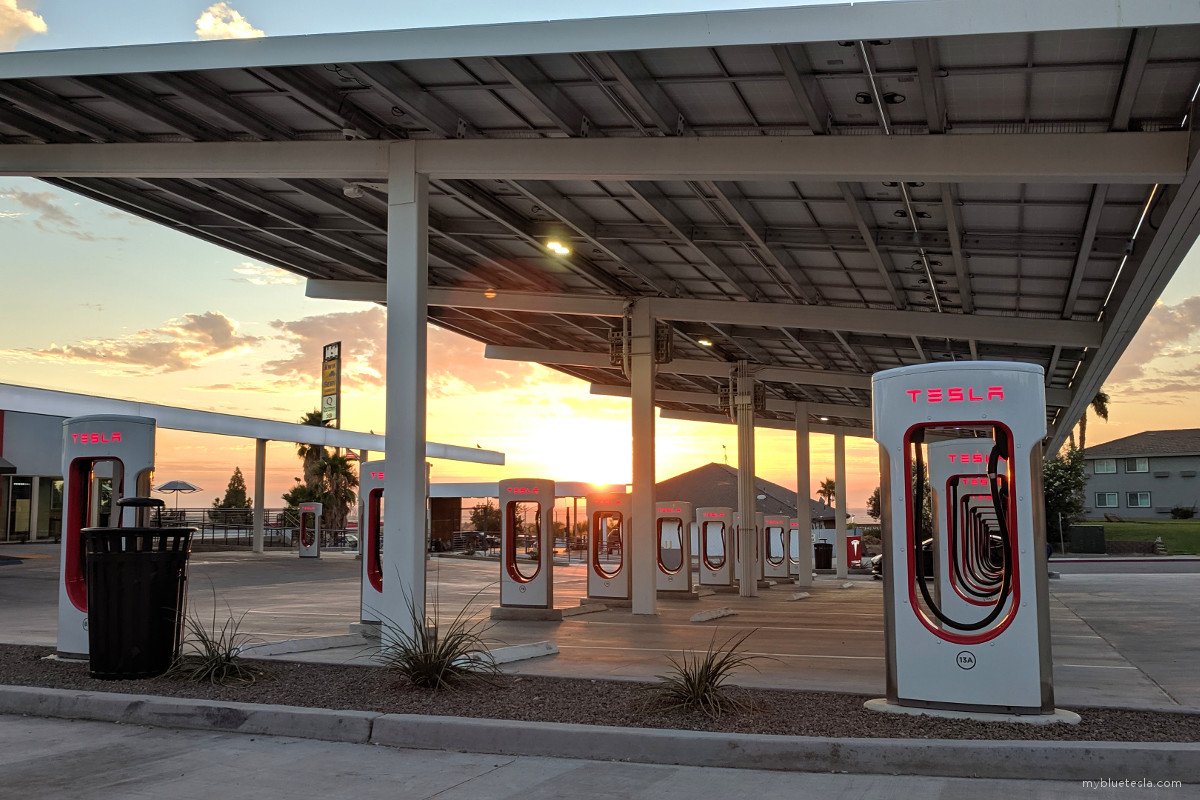 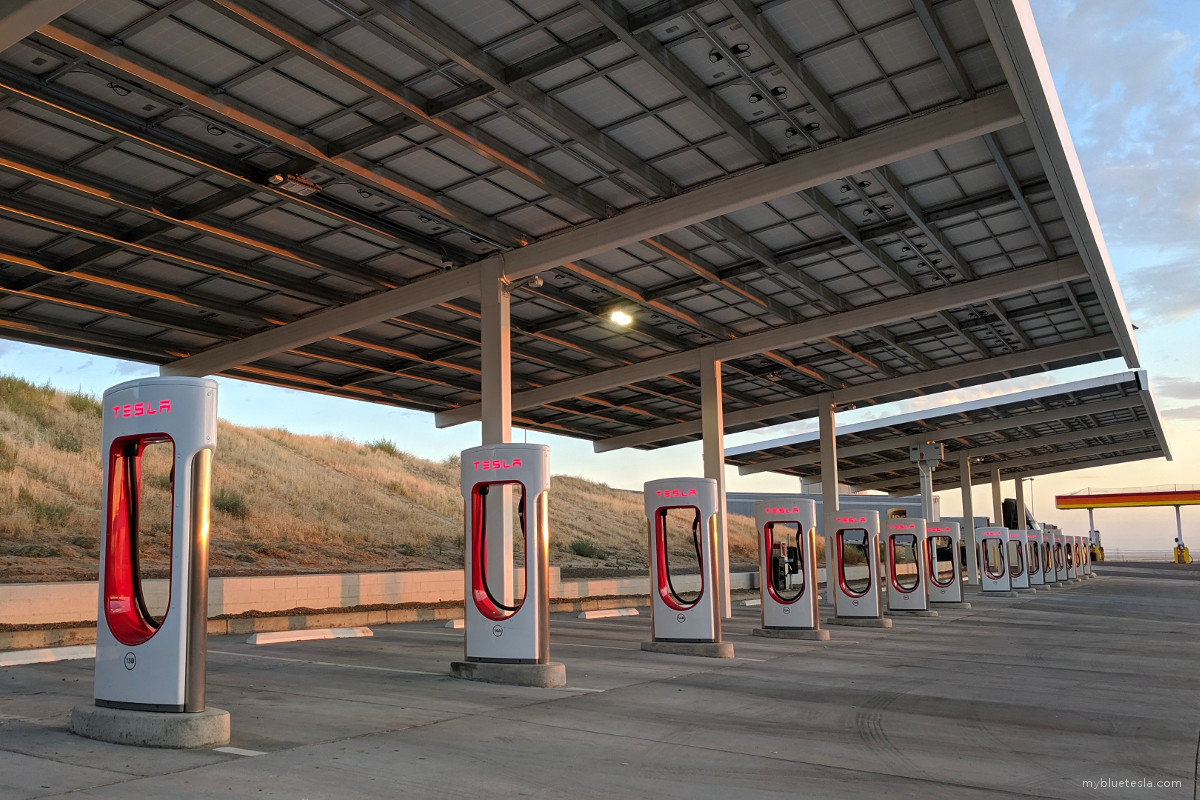 Next to the squeegee station there was a new air hose available to pump up tires as needed. When was the last time you ever saw one of these sparkling brand-new? 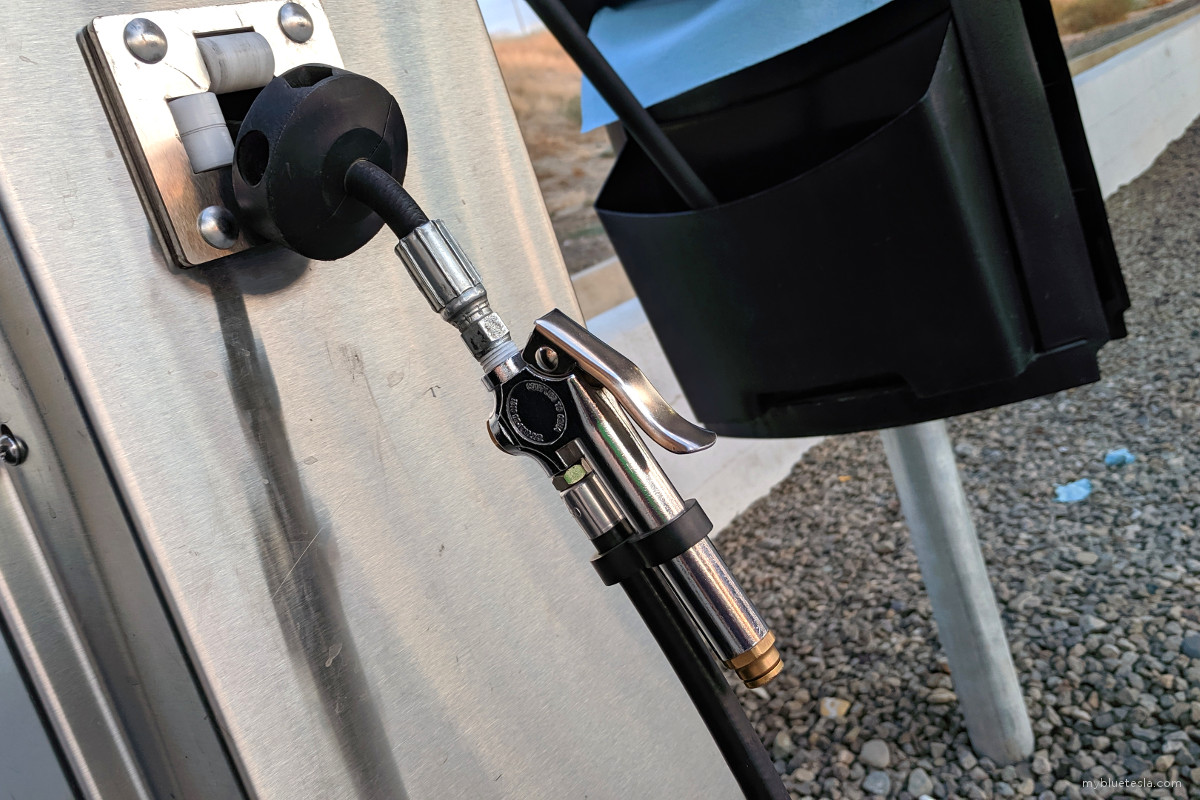 I don’t think I’ve ever been at this lounge when no one was around. 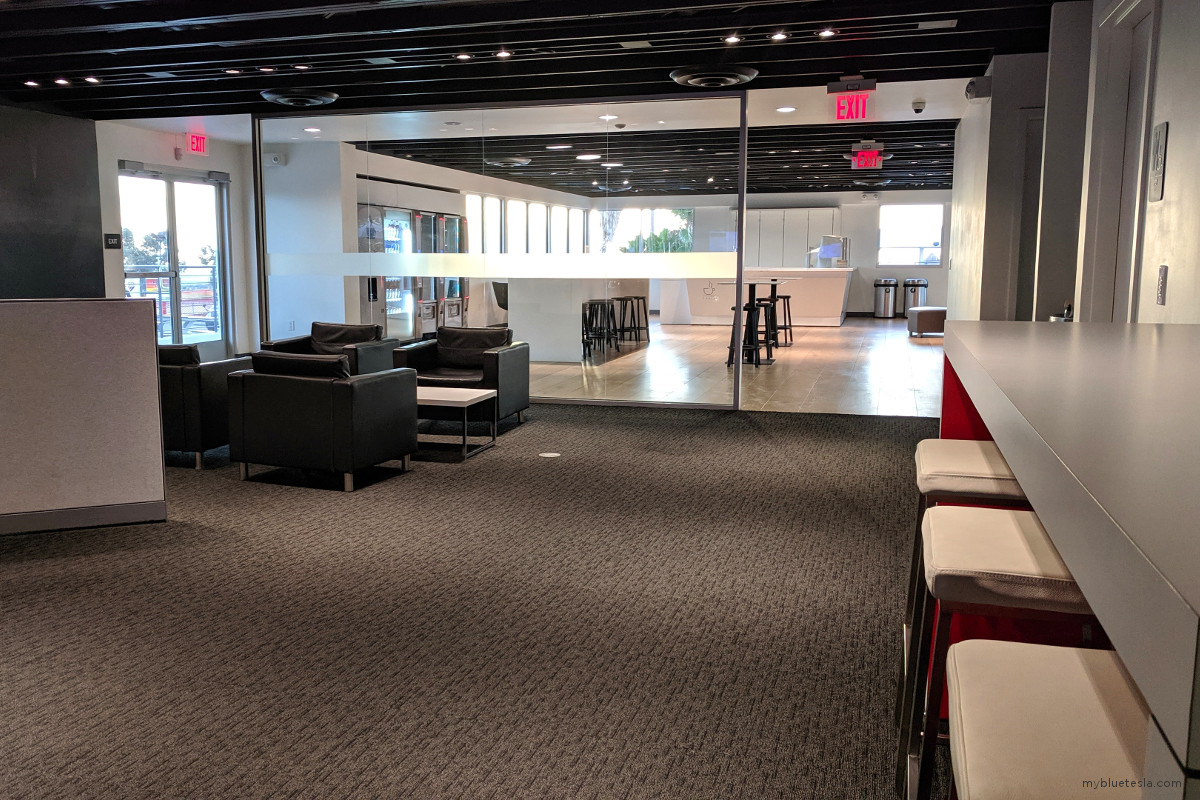 My next stop was at the Mojave location where I had a breakfast burrito at Anthony’s Grill. Out of all the places I’ve Supercharged at, this is one of my least favorites.

The Baker Supercharger was my third stop and is a first for me and one of the larger charging locations I’ve seen. Baker’s a small town but a convenience store is a mere few footsteps away for the usual snack/bathroom break. It gets hot in the Mojave Desert. 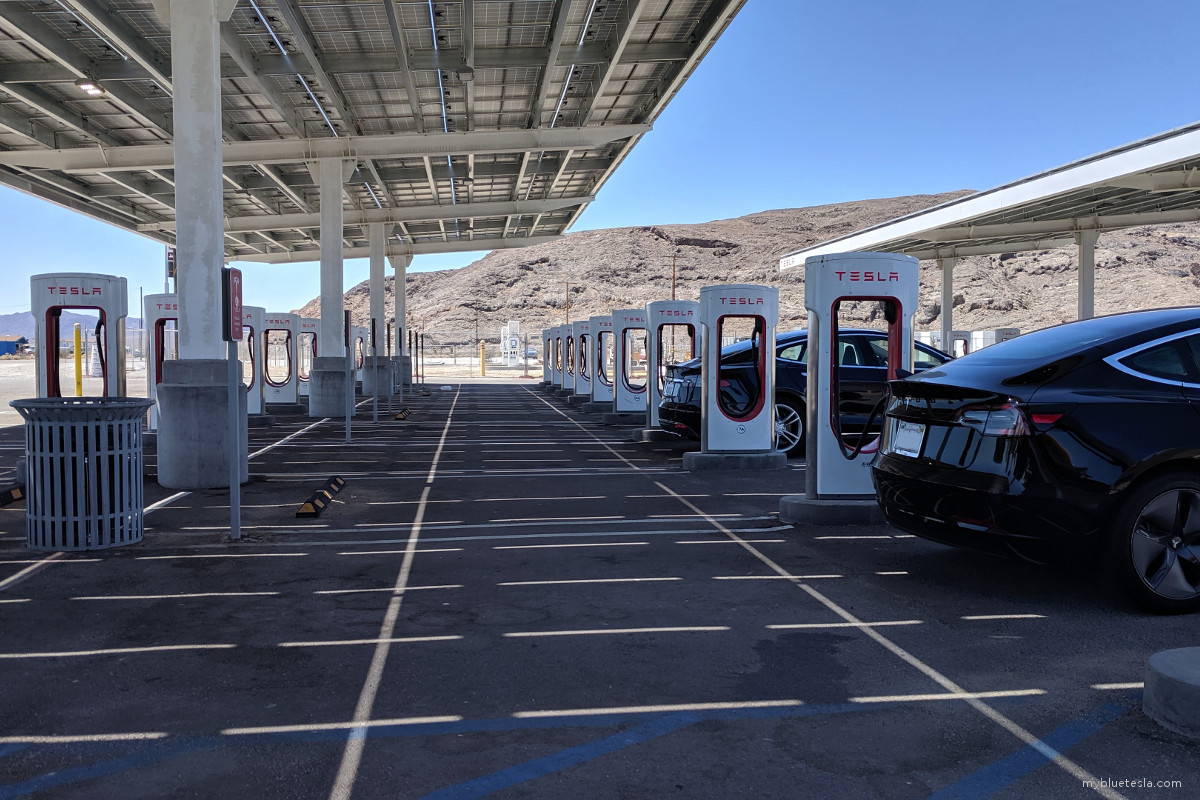 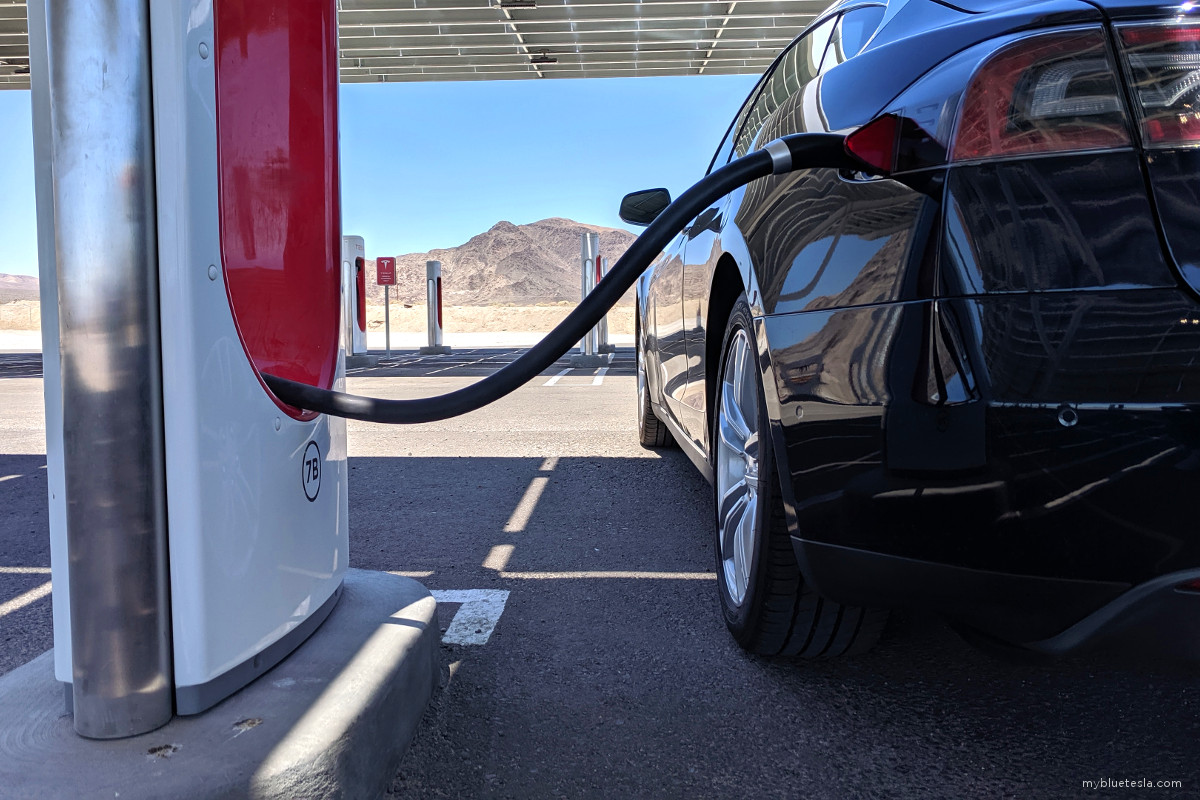 I arrived in Las Vegas early in the afternoon and checked into Bally's. Later in the evening I decided to check out the new Las Vegas V3 Supercharger right next to High Roller (across the street from the hotel). With the construction going on in the surrounding area as of this writing, I’d recommend not relying on the vehicle's navigation to guide you. Instead take Koval Lane and go west onto Flamingo, then turn onto Linq Lane. Similar to the Kettleman City Supercharger, the code to obtain a ticket to get access past the gate is listed on the MCU for the Supercharger site. 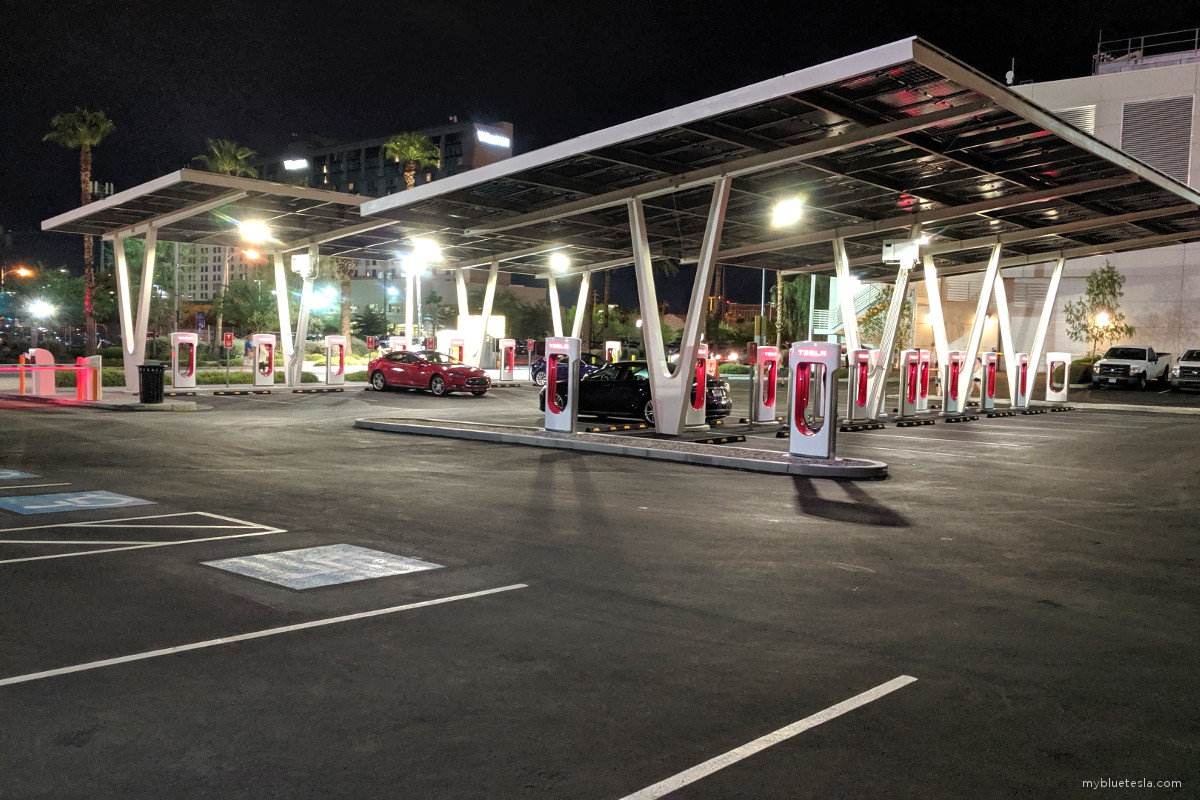 Lots of Tesla Wall Connectors here as well. Since you’re in the heart of the Vegas strip, there’s no shortage of things to see and do within a few minutes of walking. 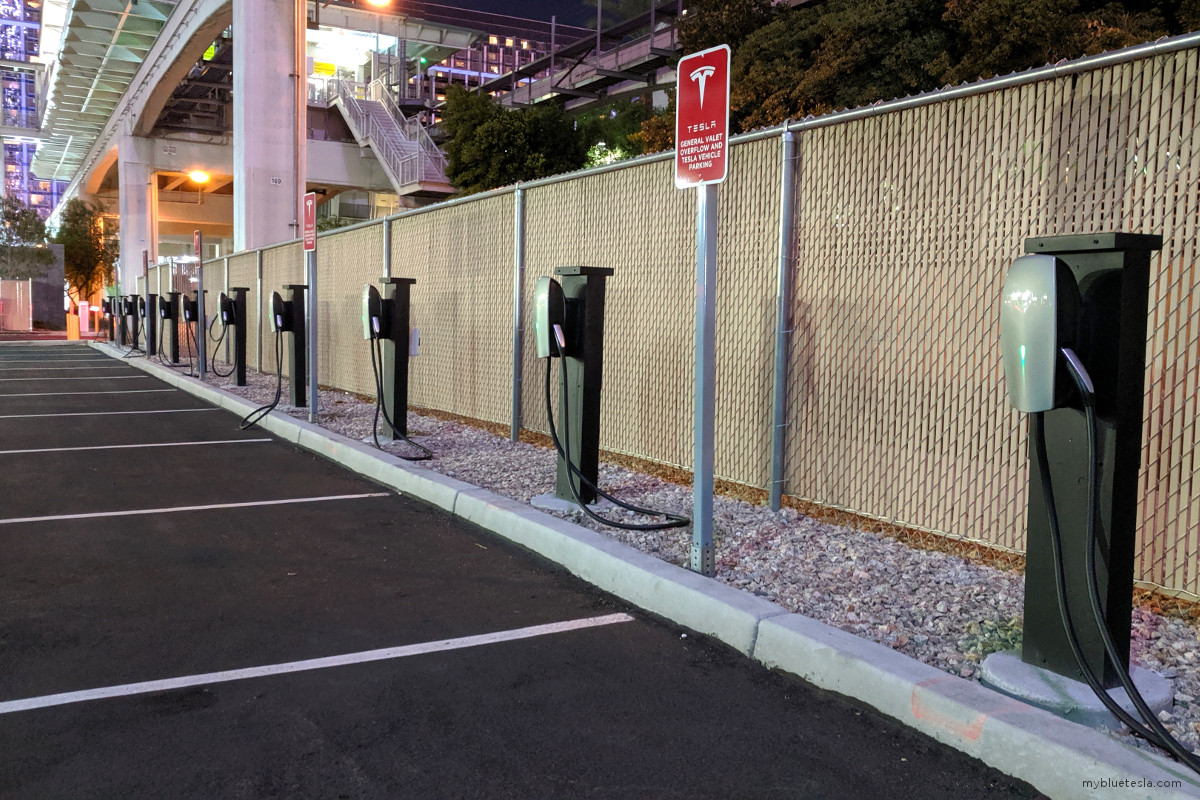 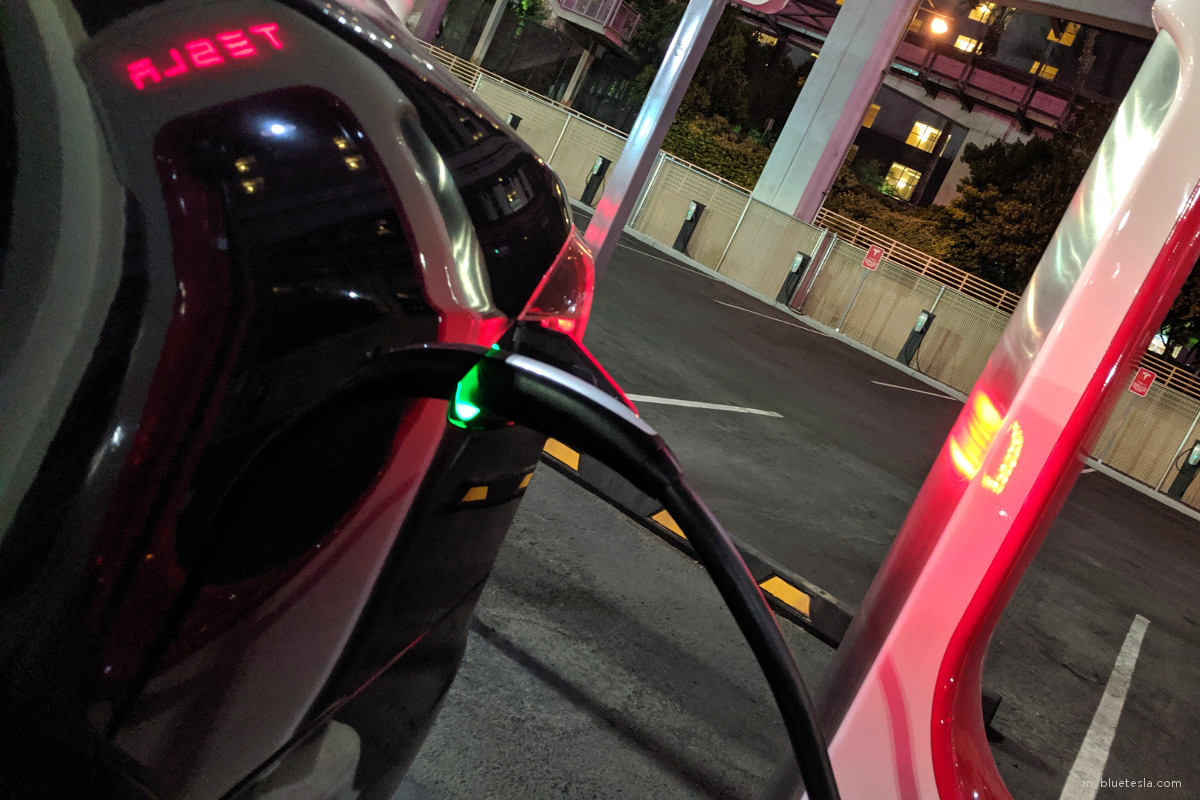 The High Roller is a remarkable sight to behold with colors pulsating throughout the ring. 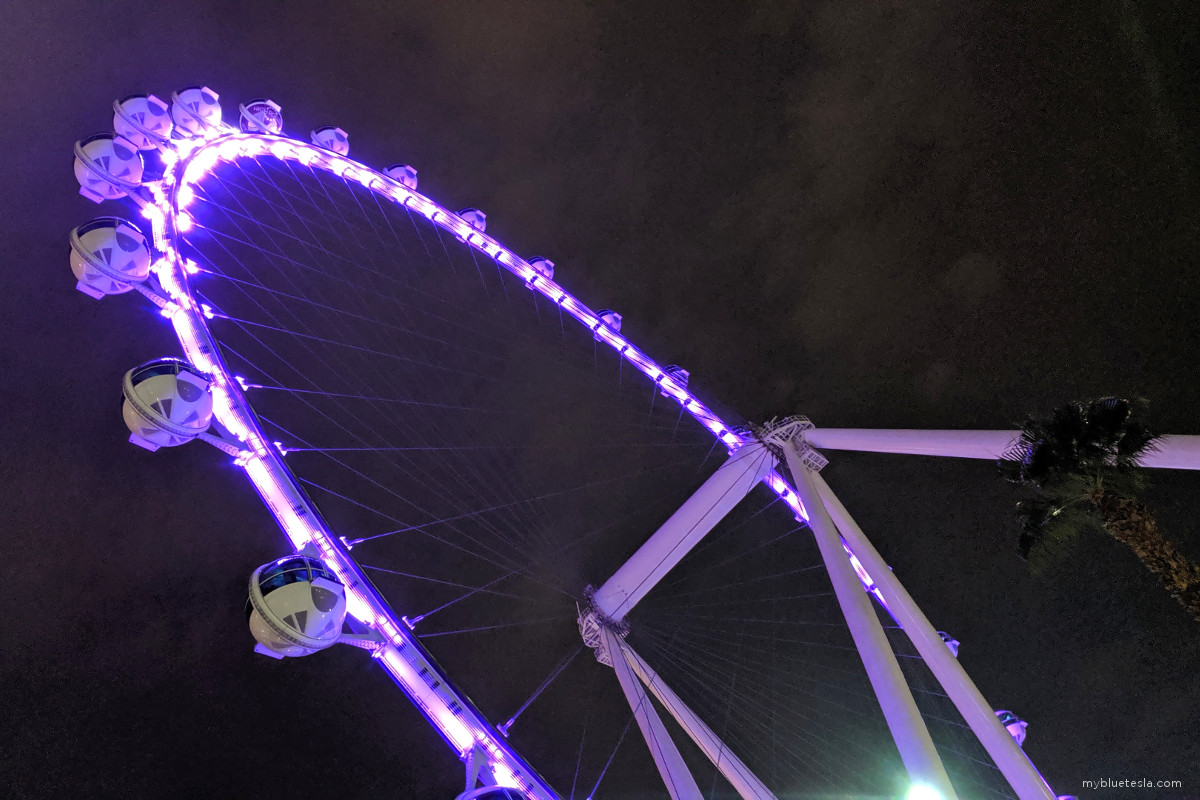 During my stay in Vegas, I got notification for a software update which I installed while parked at Bally's. This took me to version 2019.24.4 73fb1ab. I haven't noticed any major differences with my Autopilot V1 car yet.

This year’s DEF CON had the usual wide (and growing) variety of activities including hacker talks, workshops, vendor booths to purchase unique … exploratory items, capture the flag contests, parties, meet-ups, panels, and a number of villages including the Car Hacking Village where several vehicles were present, including a Model 3 as a capture the flag prize (although this wasn't sponsored by Tesla and the Model 3 itself apparently wasn’t part of the various hacking challenges). 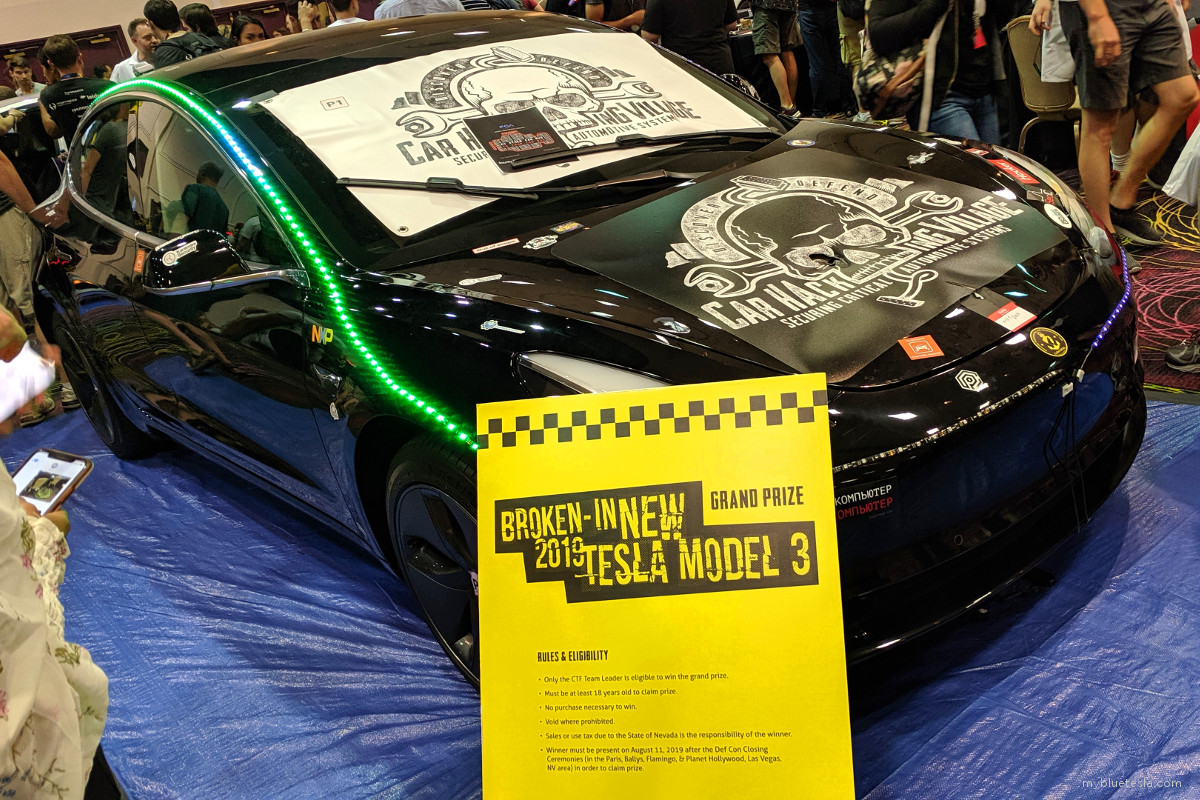 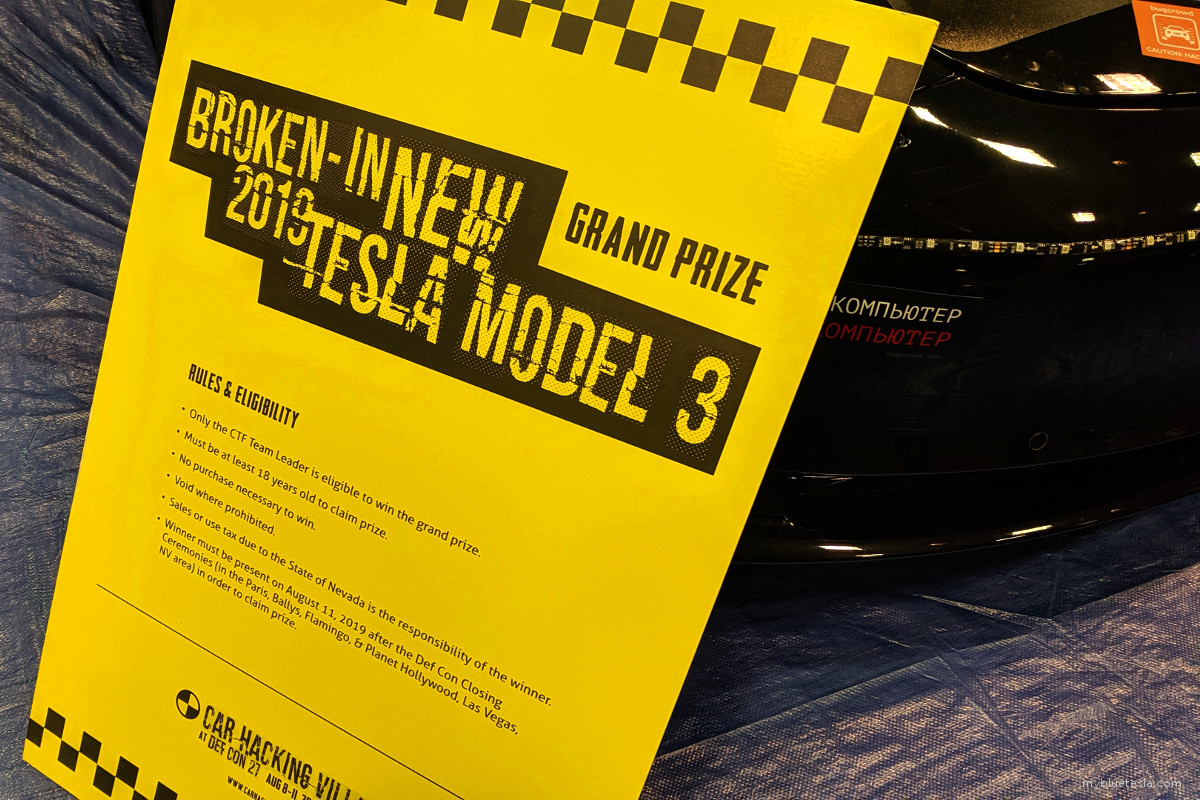 This village took up the far corner of a large hall next to the Soldering Village, Aviation Village, and ICS (Industrial Control Systems) Village. There was an open stand for a Model S instrument cluster as well as one for an MCU. Nearby were also the electronics for other cars as part of the various capture-the-flag challenges. 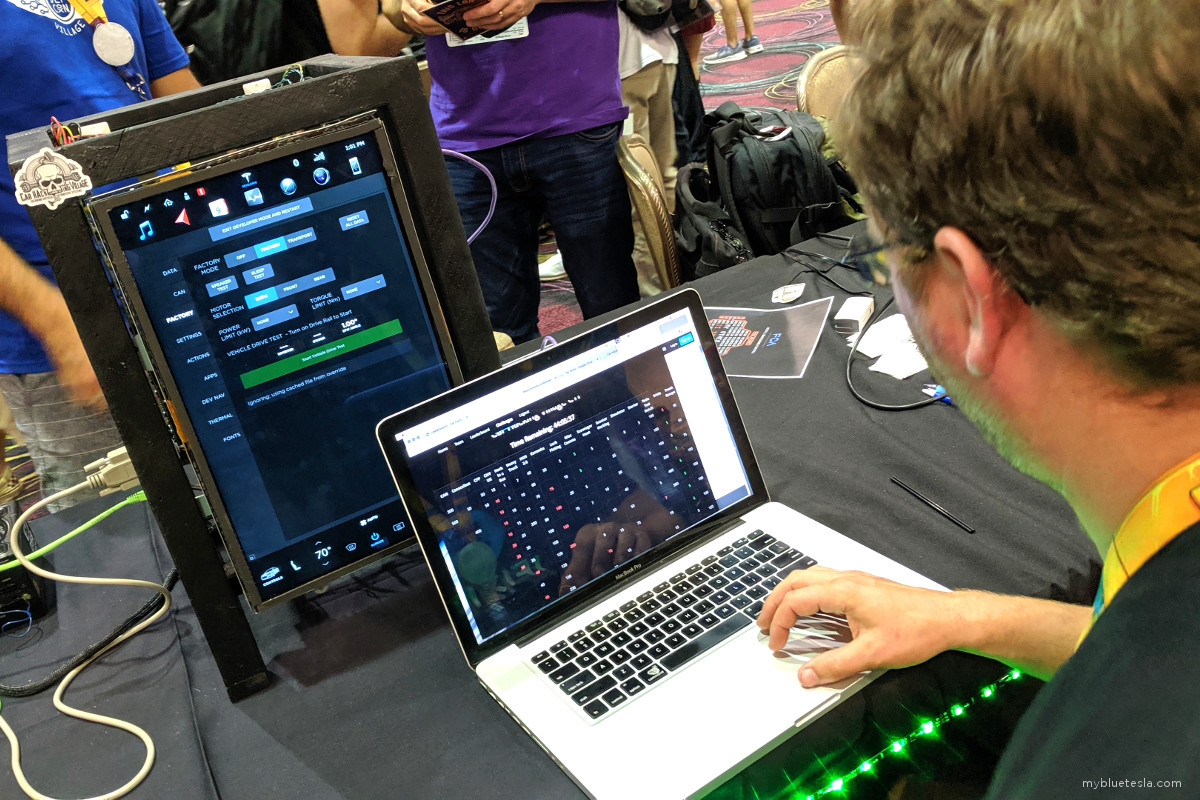 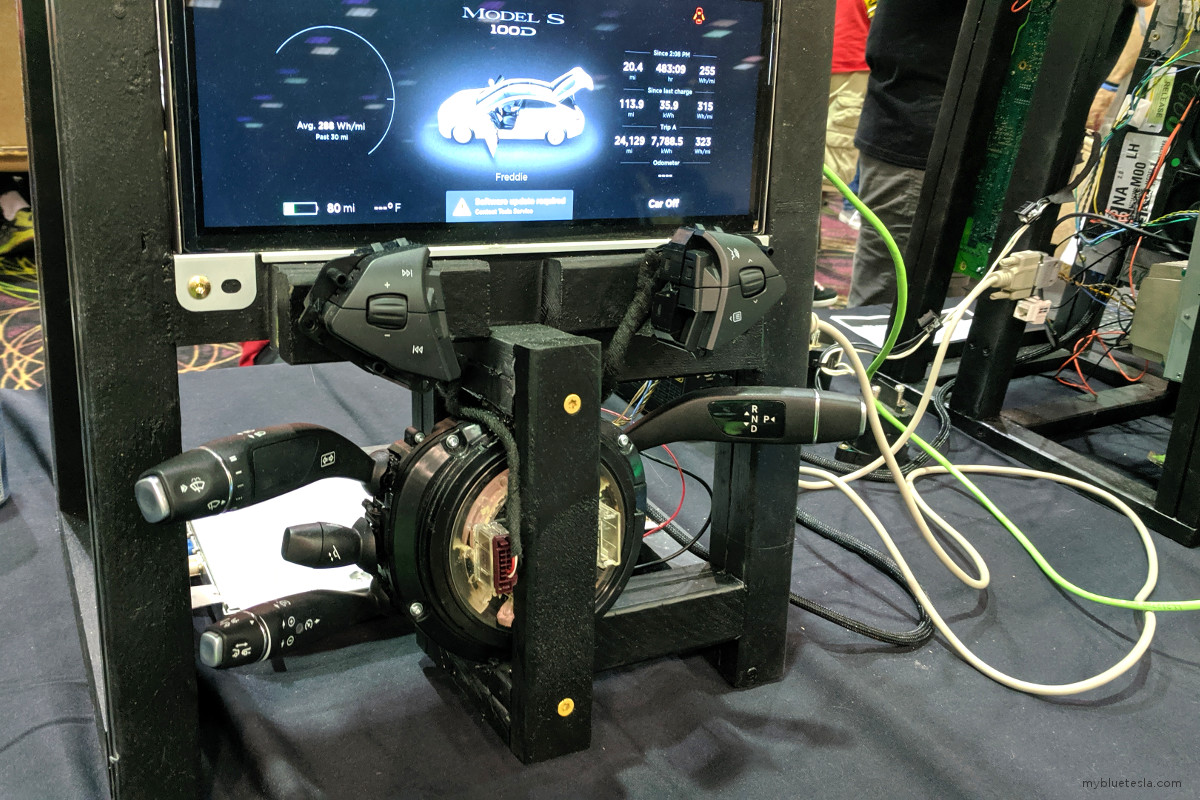 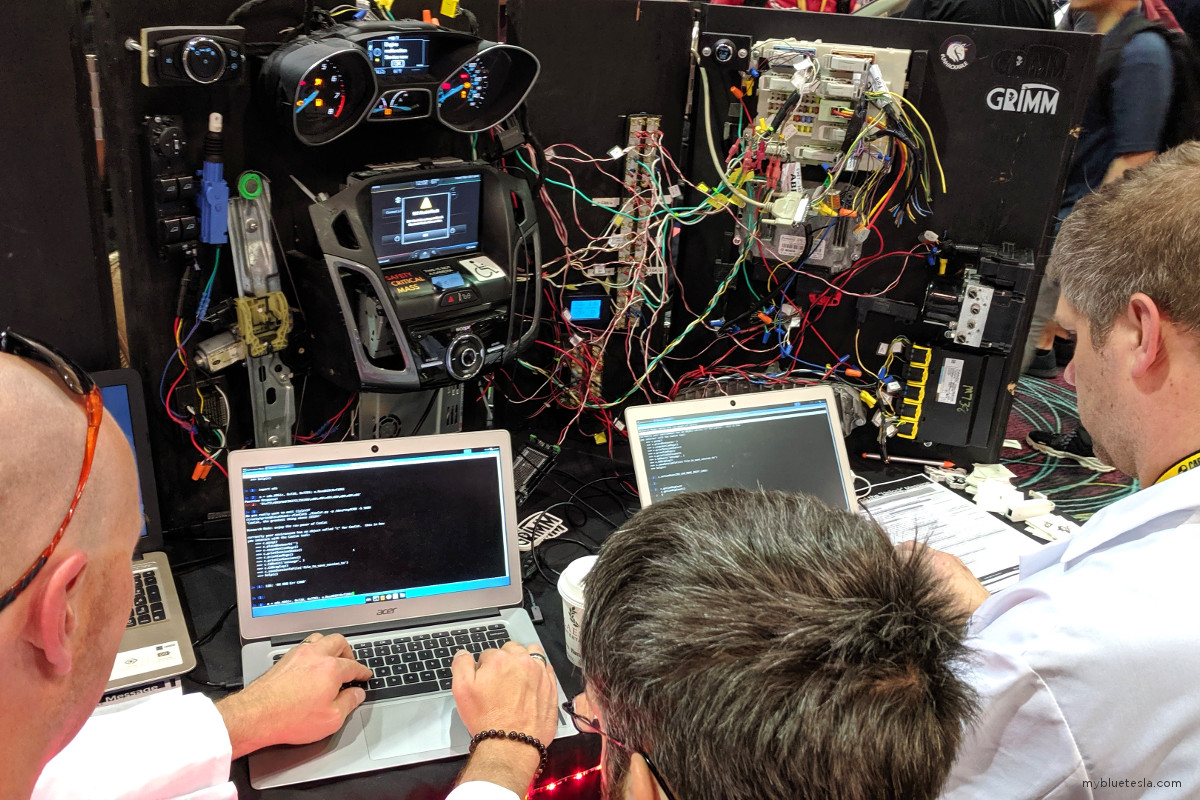 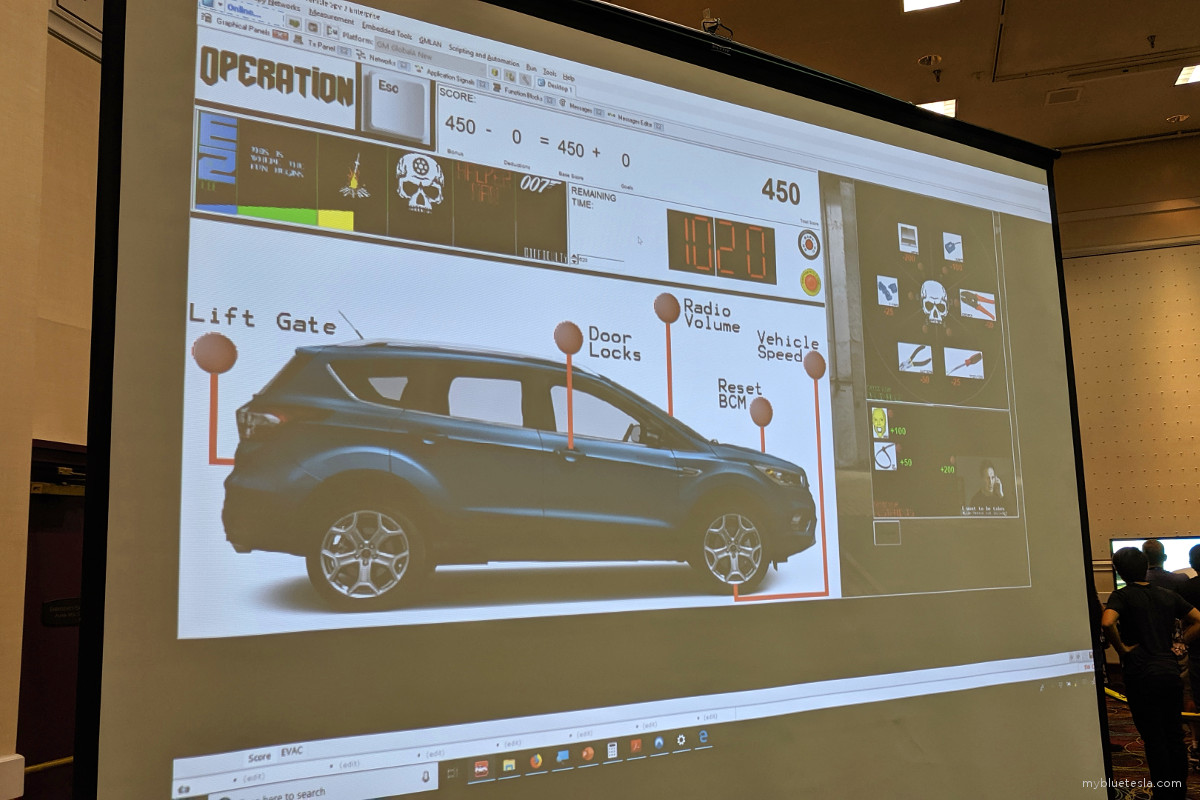 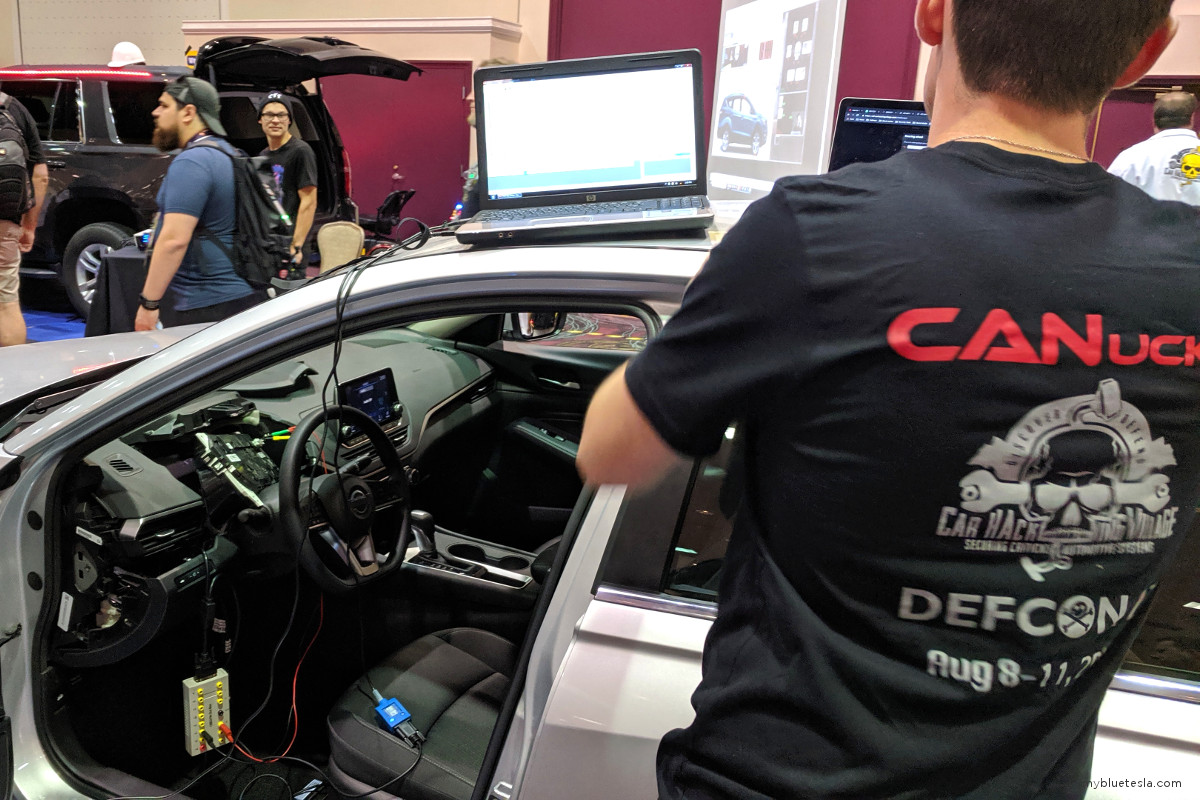 A Dodge Challenger was set up for the ultimate video game driving experience. I challenge Elon to make this happen for Teslas via software update. 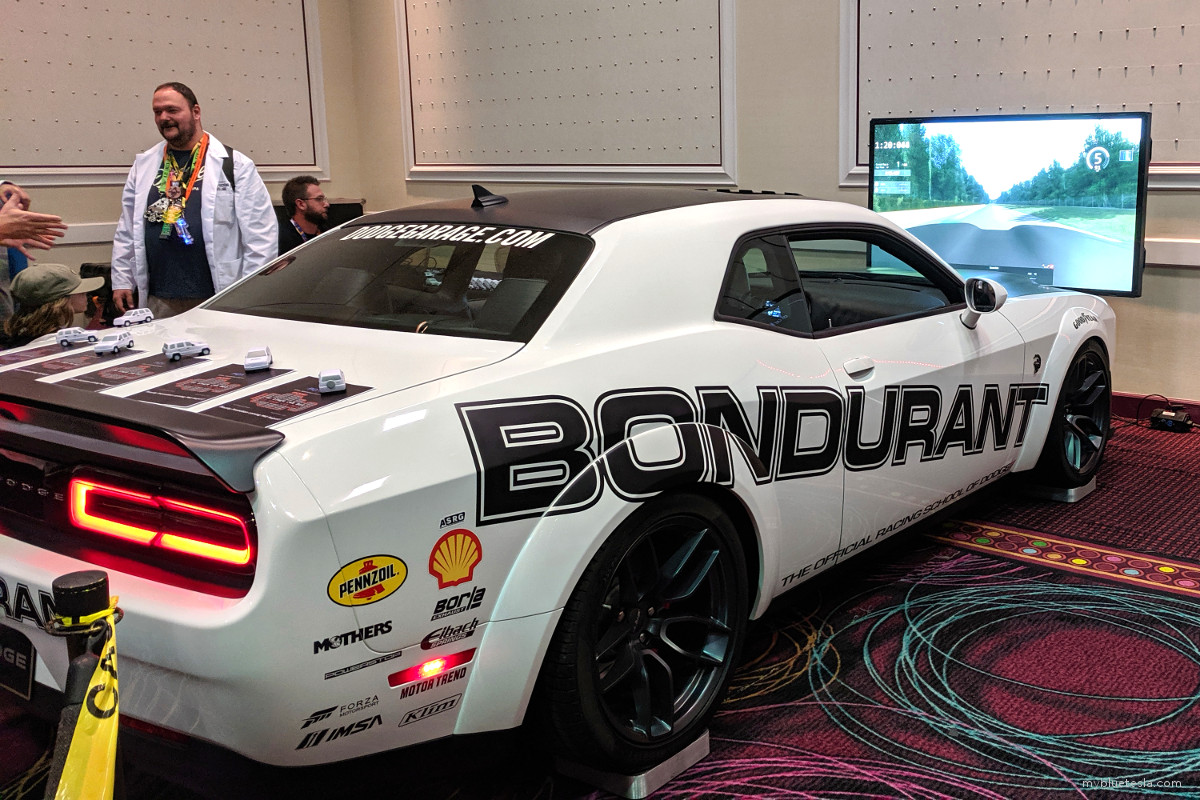 “Breaking-in” a Model 3. With a 5-star crash test safety rating, this should be … just fine? 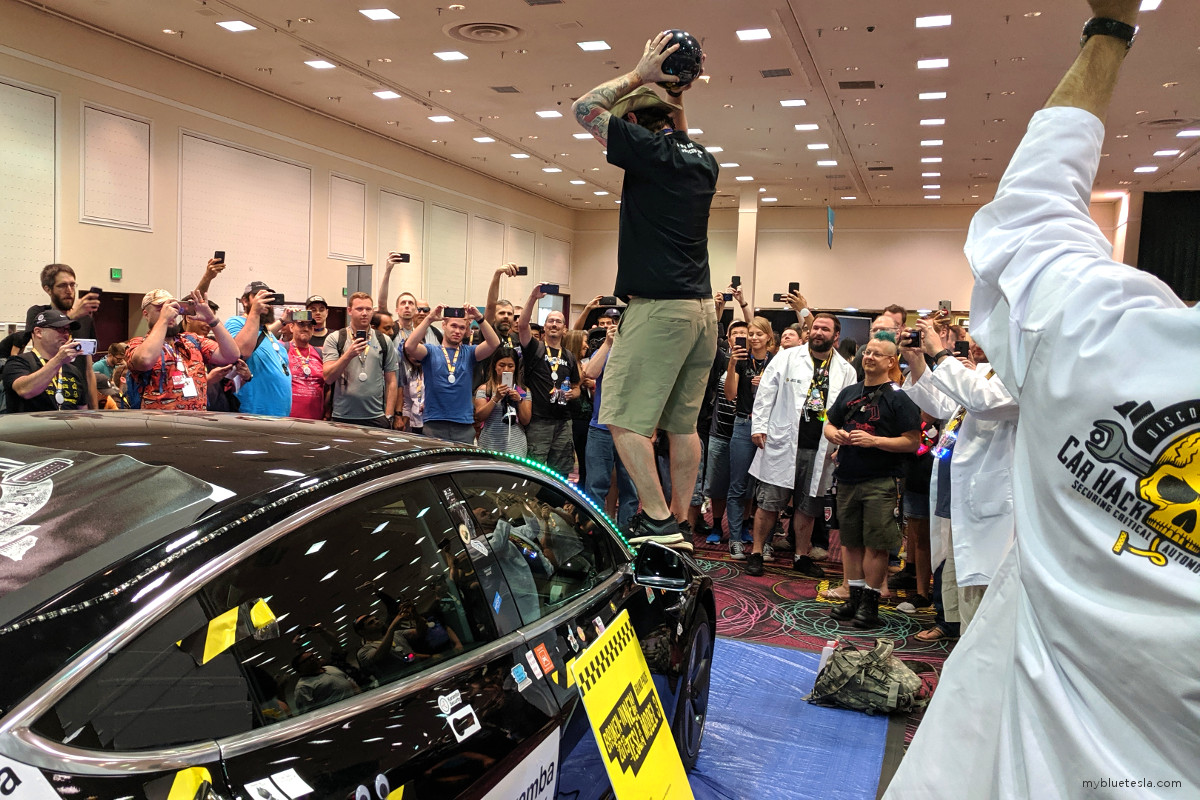 Good luck trying to get Tesla Service to cover this under warranty. 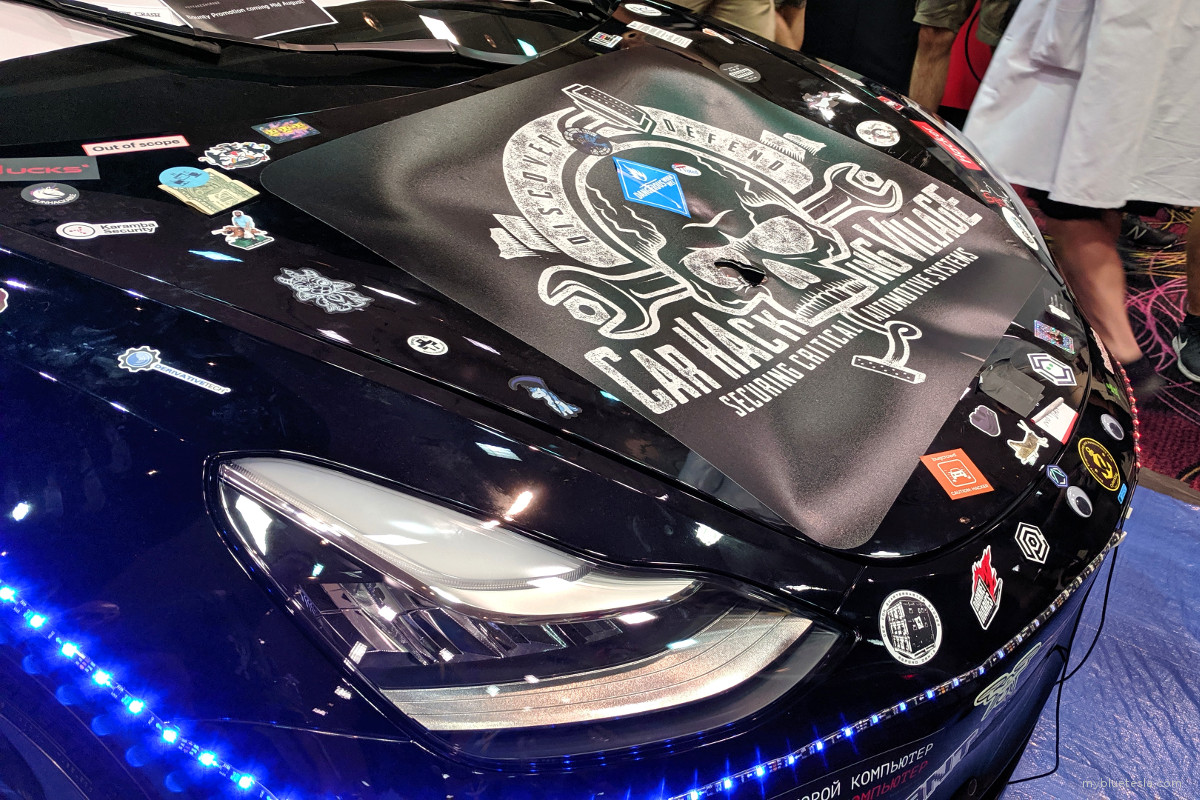 There were vendors selling tools so you can get to know your car better. 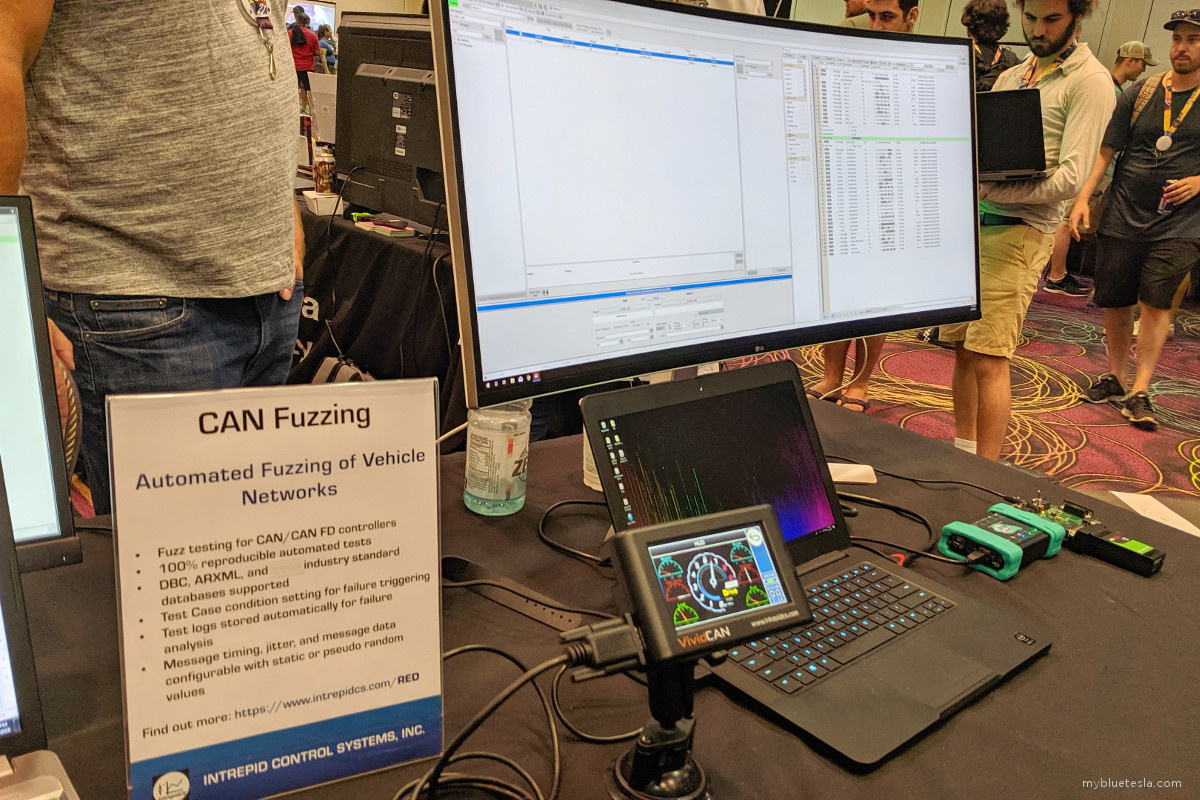 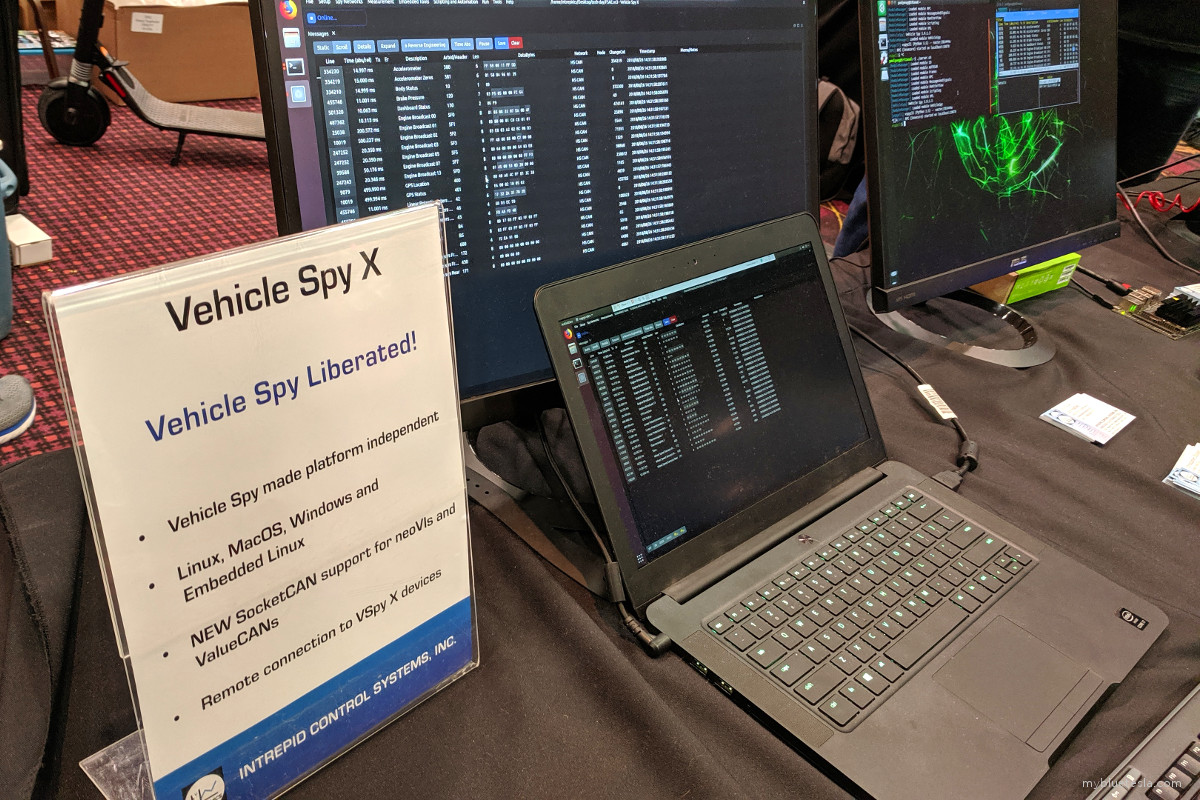 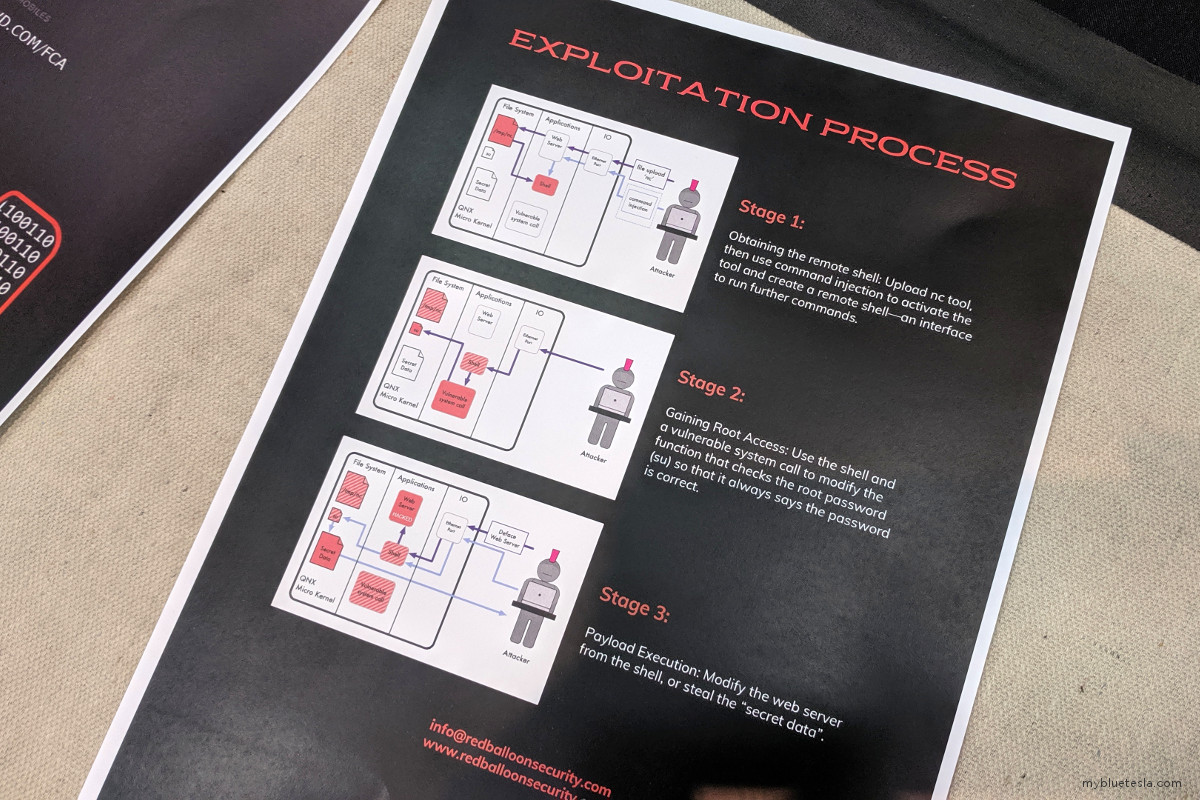 Elsewhere in the con, there was a talk regarding Autopilot which I missed out on:

Biohacking talks were also a thing and Amie DD embedded a Model 3 keycard chip into her arm:

After 4 long days at the conference, on the way home I decided to check out the new Yermo Supercharger even though the nav system directed me to Barstow which is 15 miles further down (I didn’t feel like hanging out at or around Chili’s). Although the navigation data indicated “limited amenities” at this location, it turns out that there’s a large restaurant/shopping facility known as EddieWorld.

As I pulled into a charging stall, I saw the same Model 3 from the DEF CON Car Hacking Village. I briefly chatted with the two guys who had won the CTF and it was interesting to see the result of all the bowling ball hits on the hood. The hood obviously did not survive. 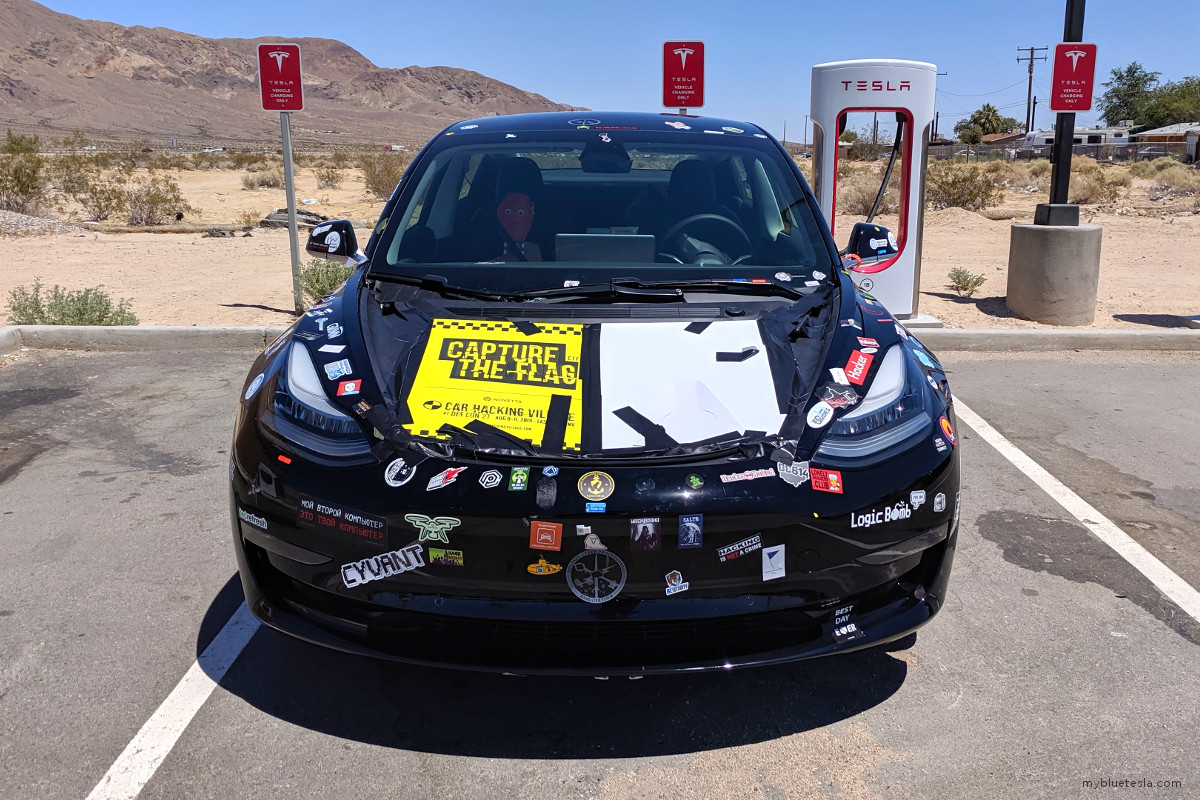 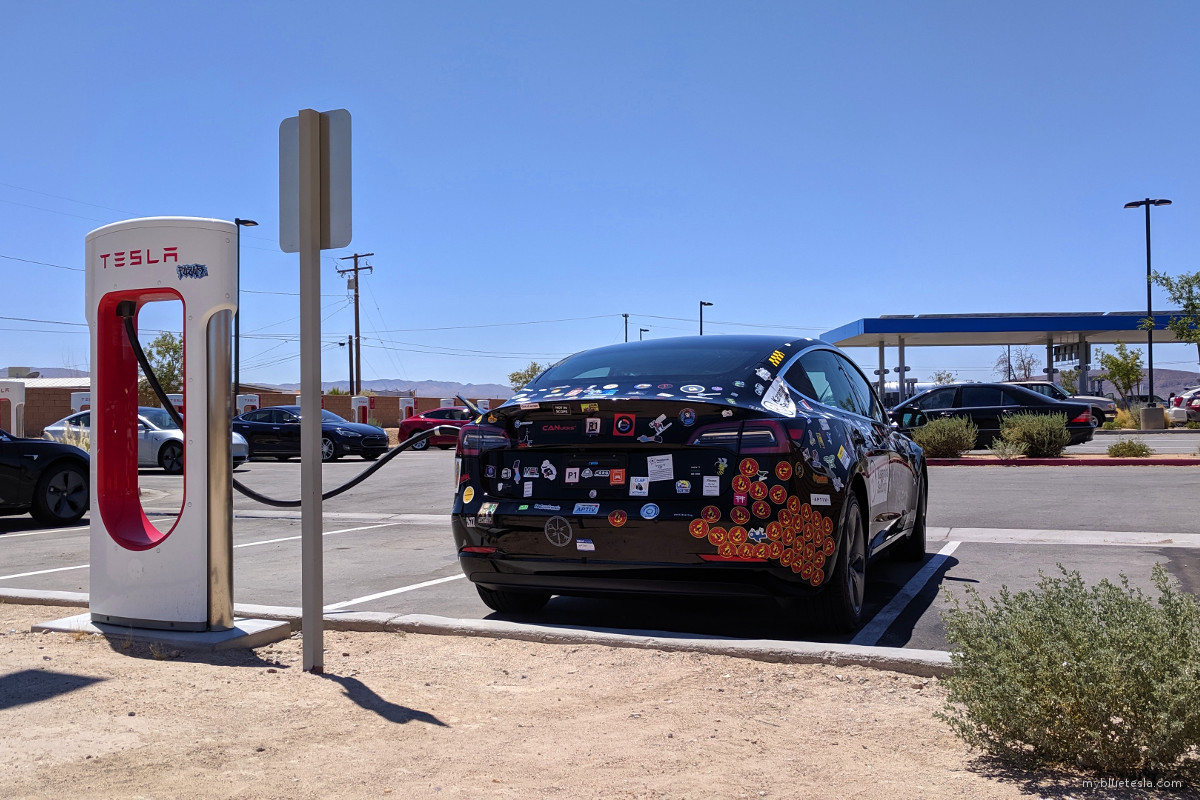 Then it was a long drive to the Bakersfield Supercharger for a brief stop, after which I headed to Kettleman City instead of the nav-recommended Harris Ranch since Coalinga air is not exactly the smell of roses around this time of the day. I saw the “broken-in” Model 3 again charging here so it looks like the CTF winners and myself were on a parallel course towards home.

I also stopped by the Gustine Supercharger for the first time where Pea Soup Anderson’s restaurant is located. 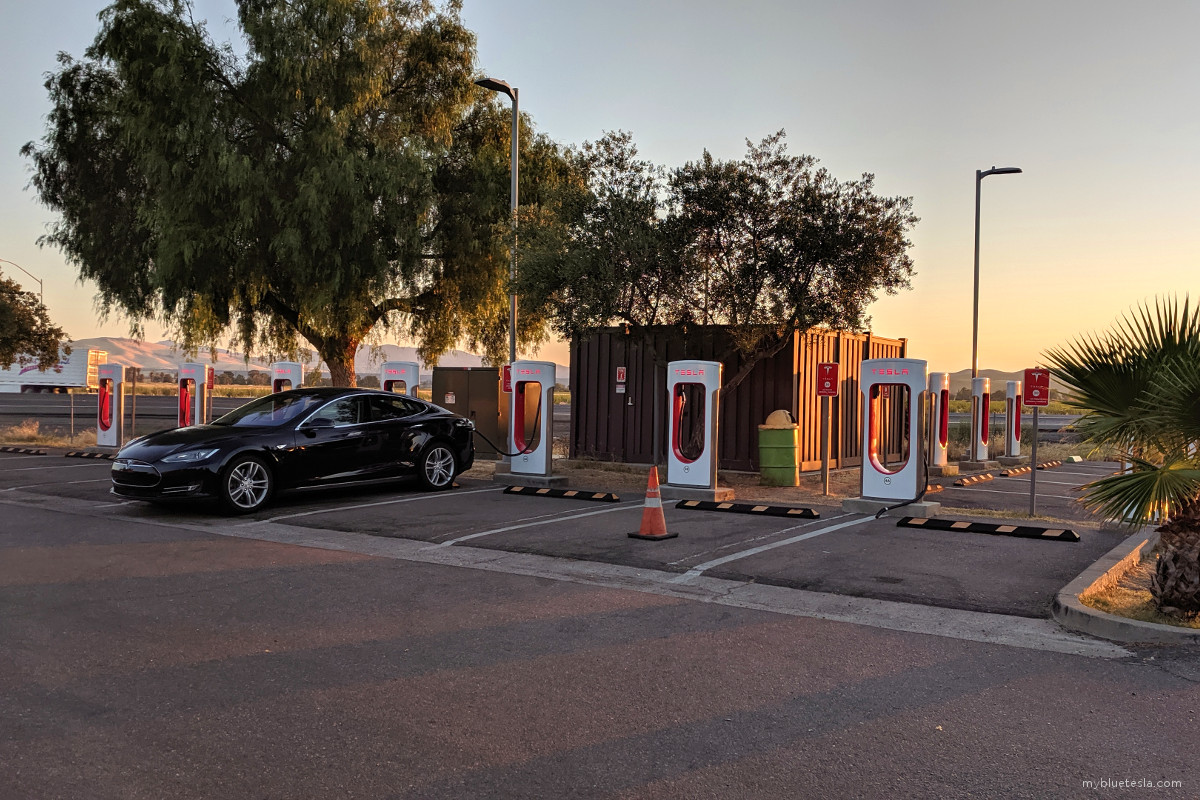 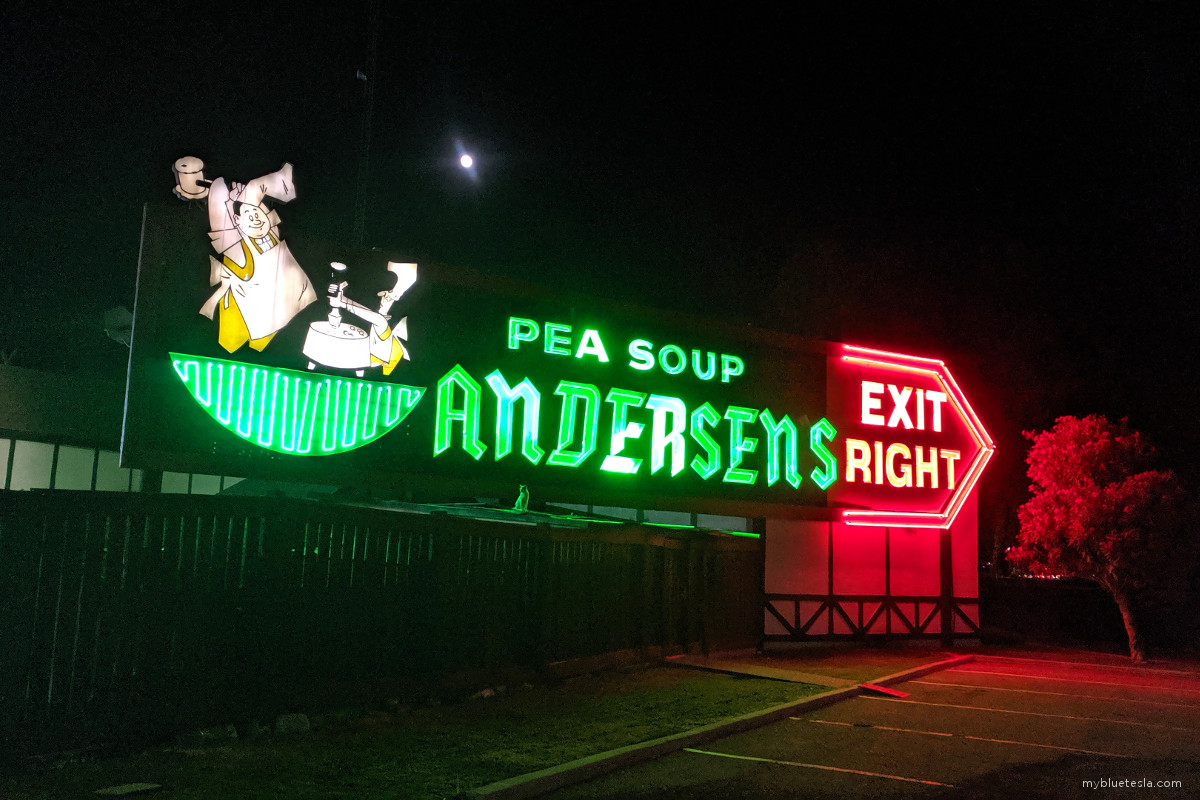 All in all, conferences such as DEF CON encourages everyone to hack All The Things to understand the world we take for granted and learn the real nature of the the products we use daily, including cars. Every manufacturer makes claims, but it's up to us to determine how much is really true and what these Things are really made of. 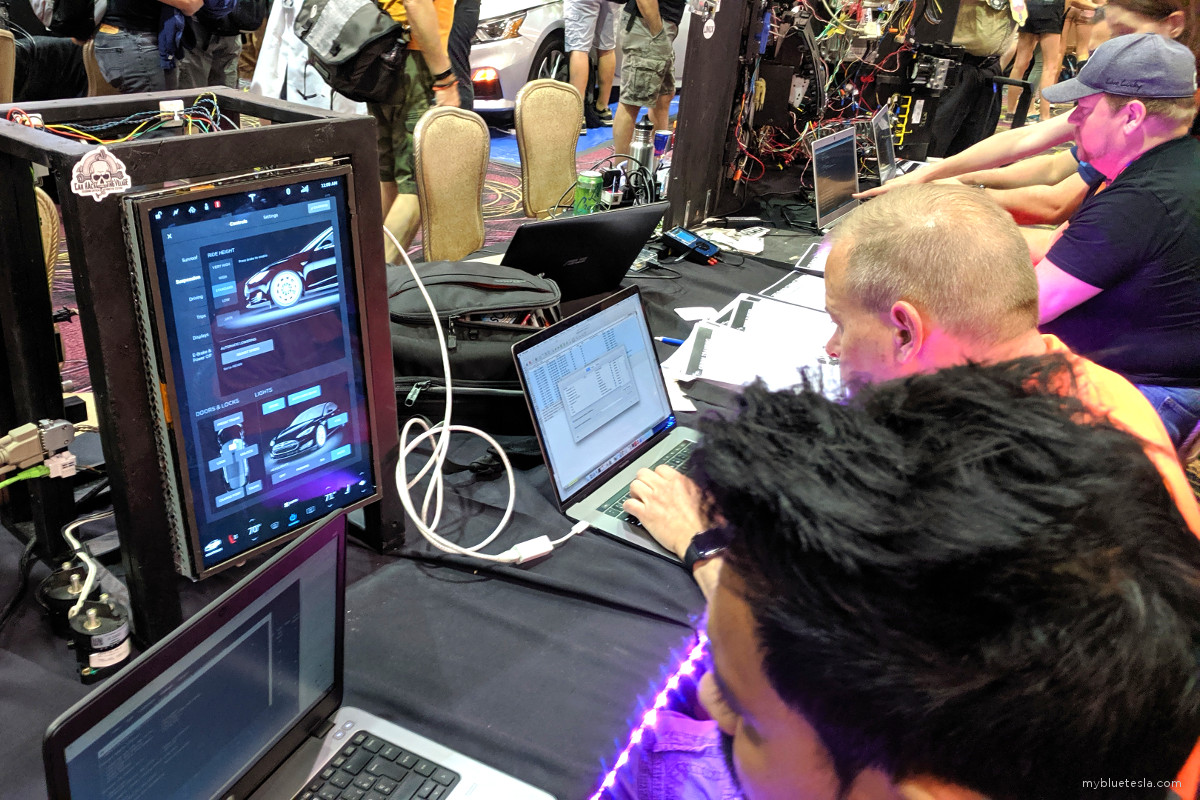