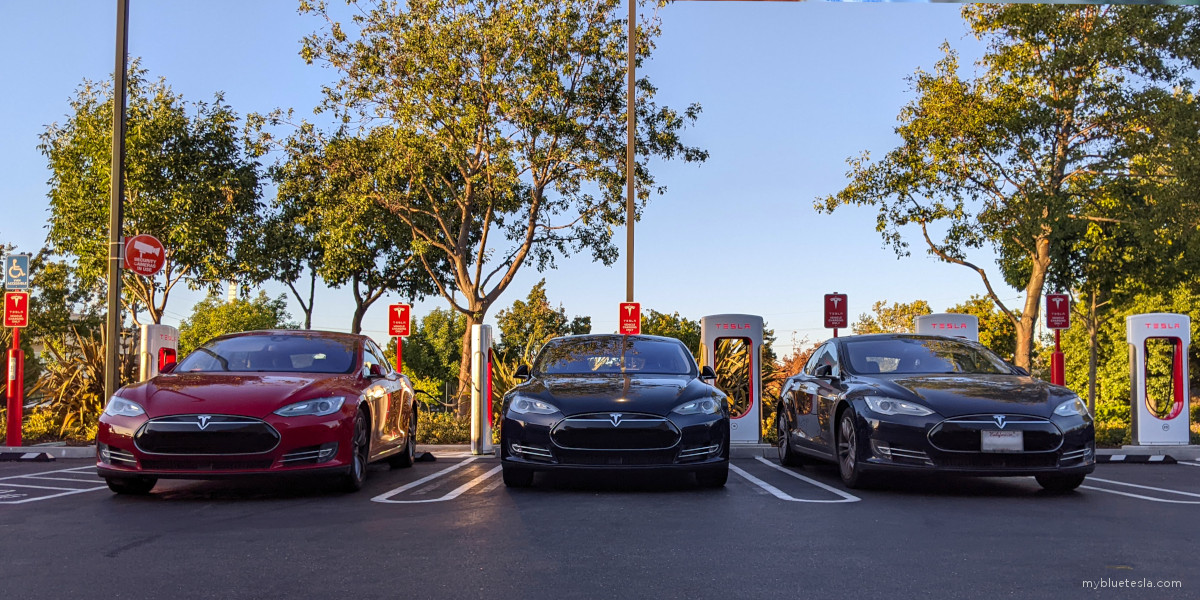 Congrats, Big Blue - you're 8 years old! It's 2022 with 141k miles on the odometer and you're still a damn fine looking land-locked spaceship from any angle: 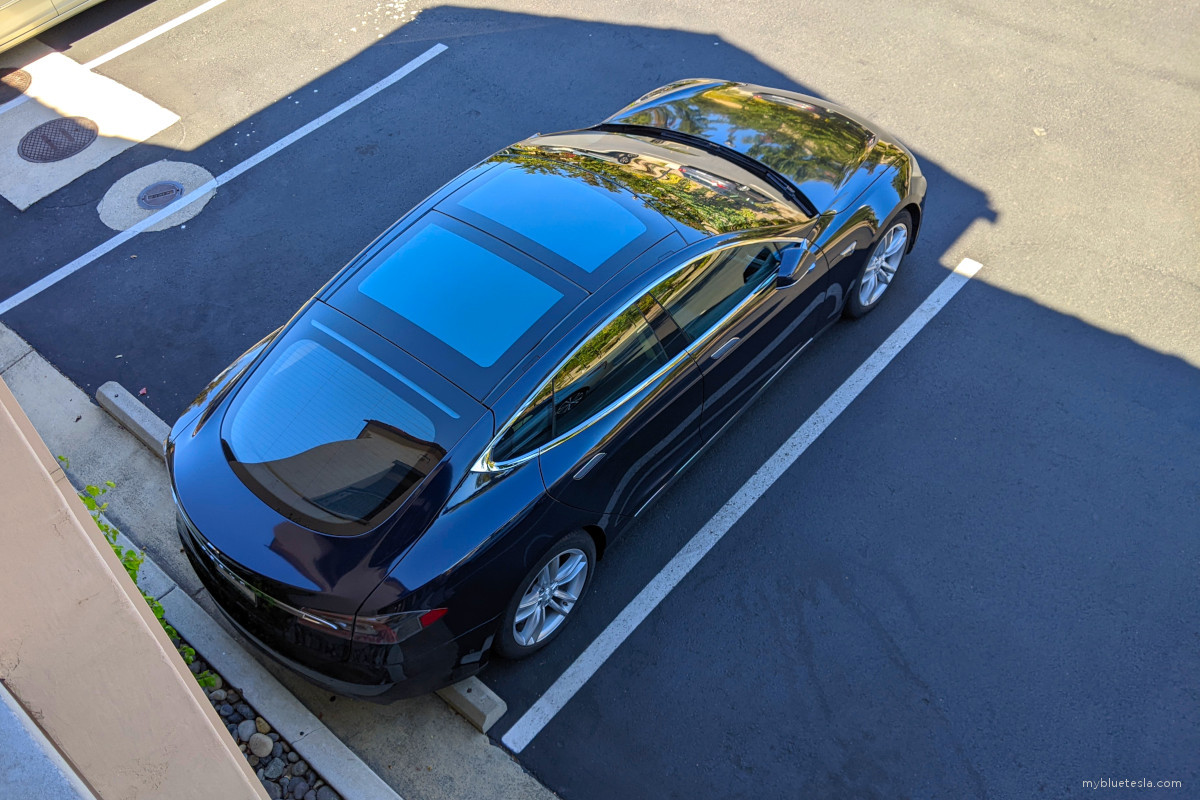 That's averaging 17.5k miles per year, although the last few years have seen much less use due to the pandemic.


It's quite rare these days to see another original Blue Metallic. I'm proud to say that after all these years mine still looks cleaner than most others of my generation: 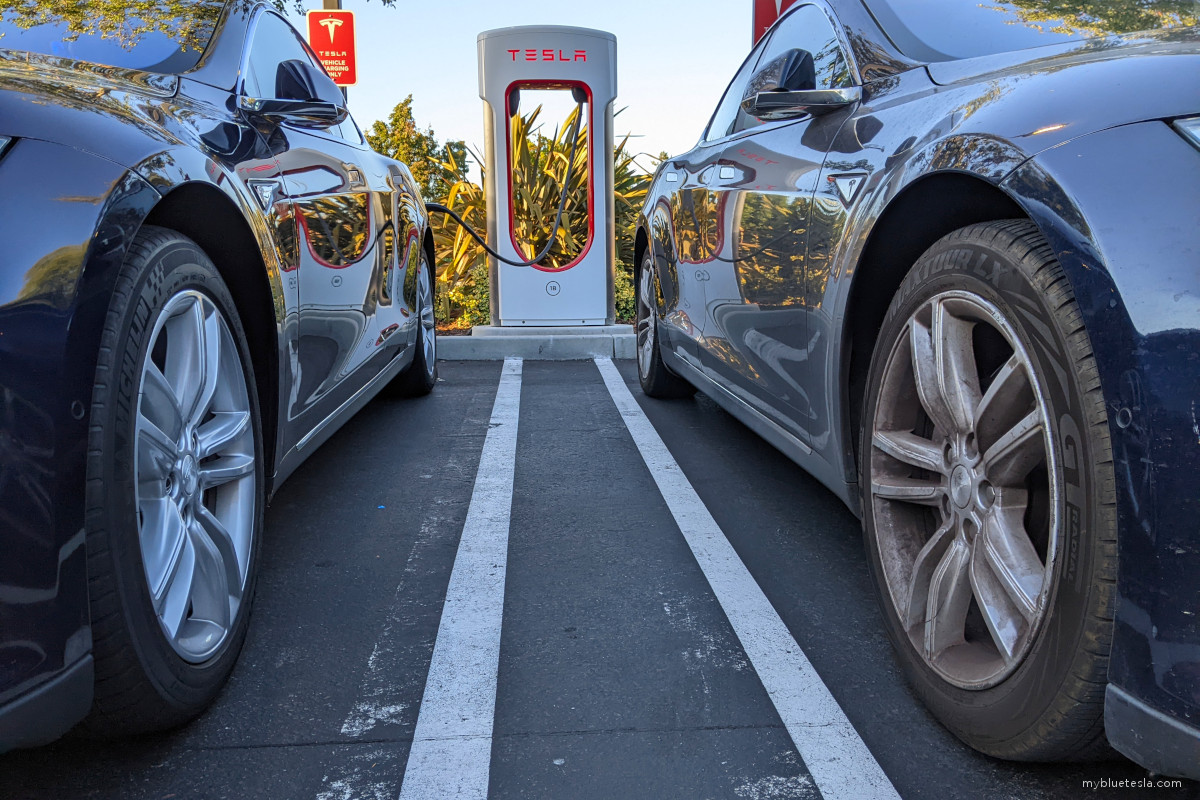 Apologies to the owner, but this is pretty crusty: 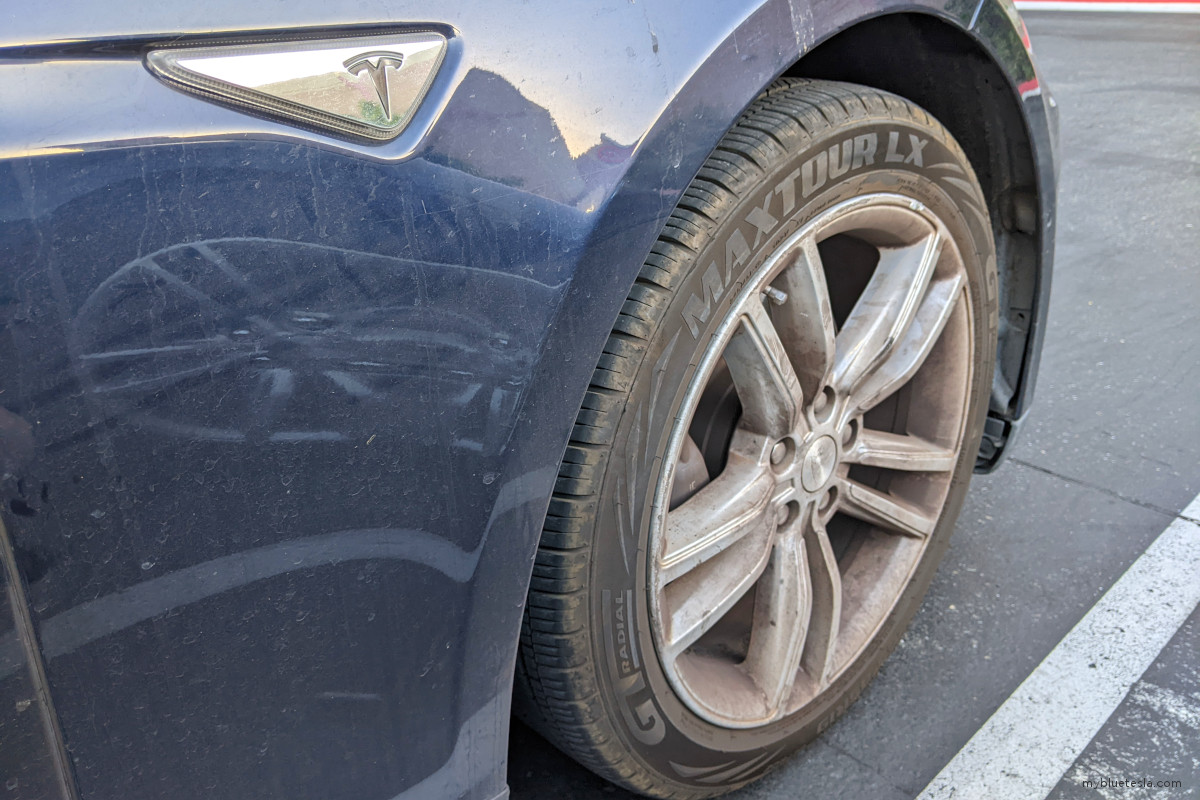 Some repair work done in the last year, specifically two door handles. At this point every handle has been replaced at least once. I think one of them might still be on a slightly older design (which could eventually fail again) but so far so good. 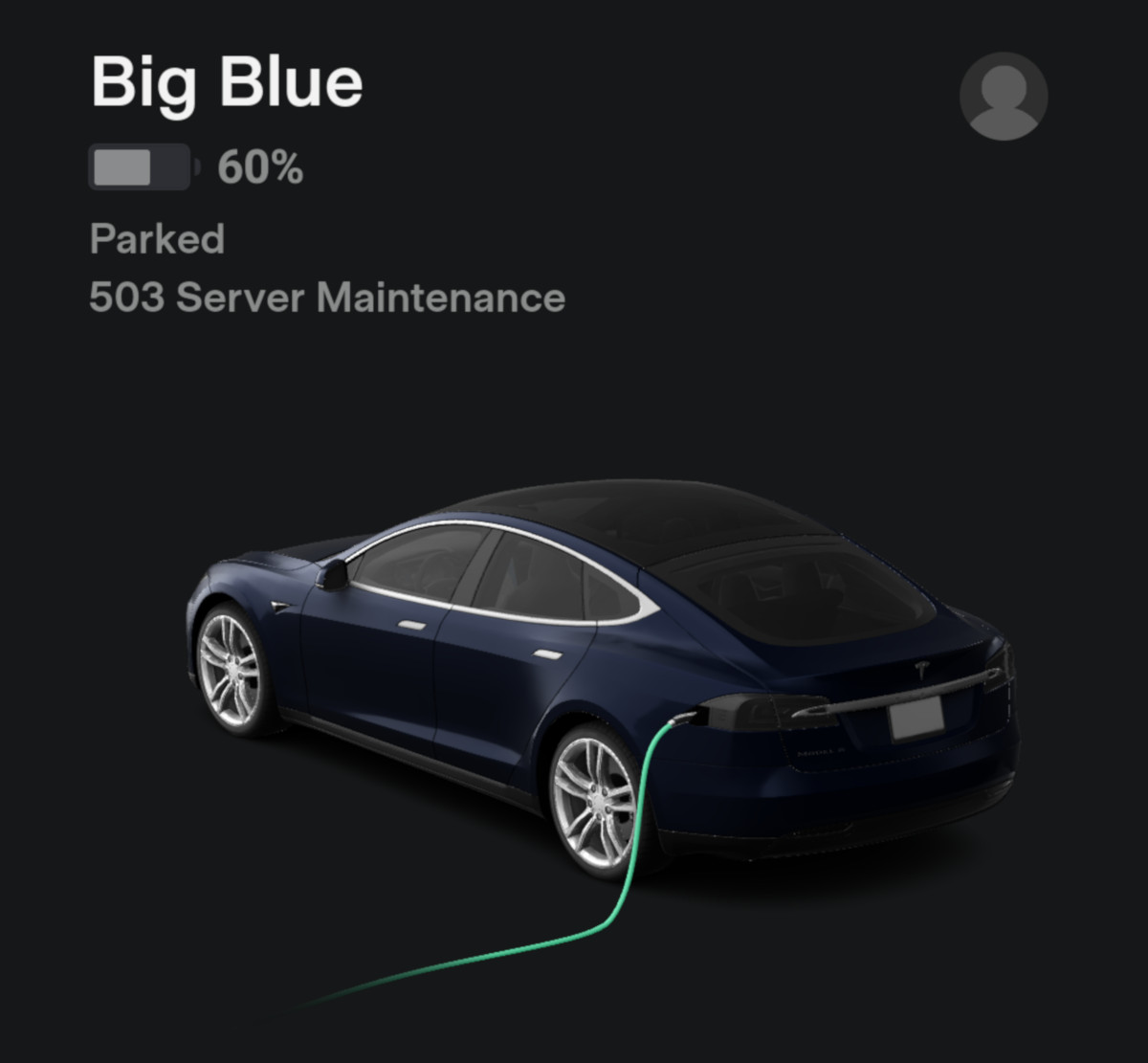 Charging feels slower than ever. Either my patience is thinner these days or software throttling is creeping steadily against my wishes. 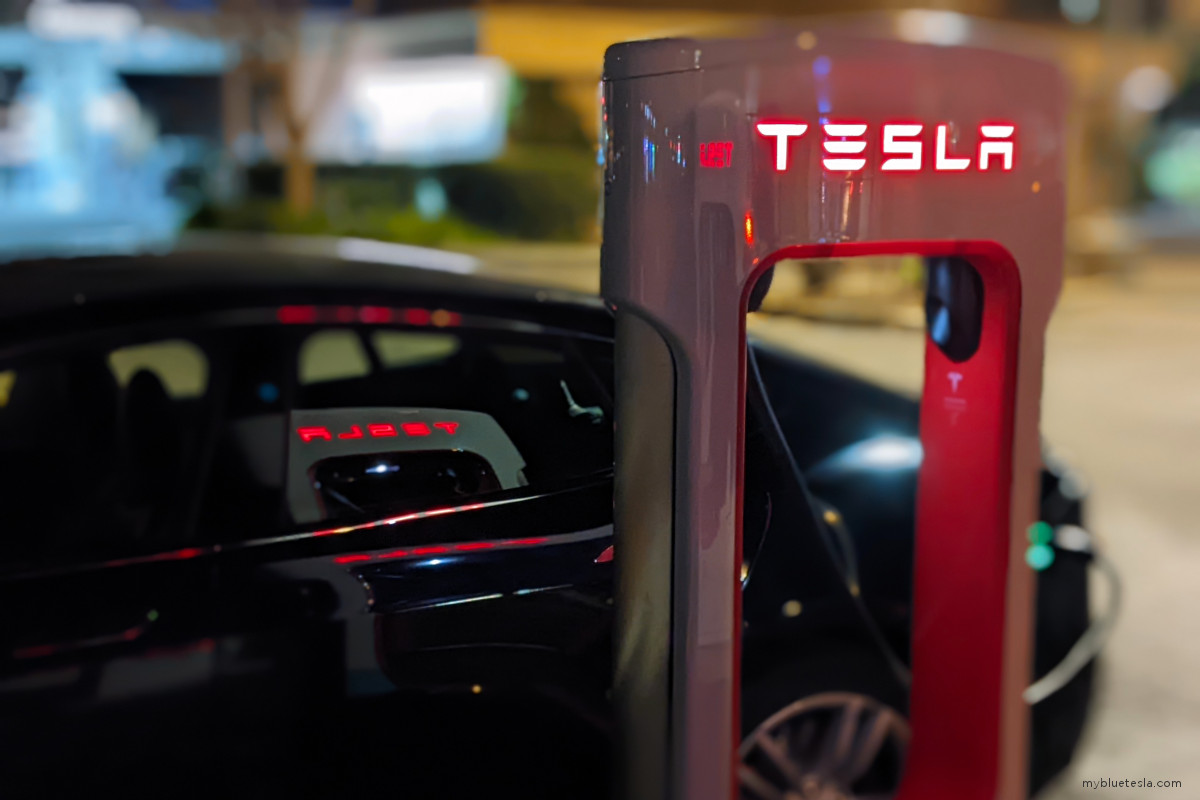 Even with appropriate preconditioning the software restricts max charge speeds at the high end of the range. Very, very rarely do I see something above 100 kW, and if I do the SoC is probably 5%. Otherwise it quickly reduces to 80 kW and then to 65 or less. Once the SoC is in the 20 - 60% range the speed hovers around there for a while and slowly trickles towards 35 kW by the time I hit 80%. Either Tesla's being a lot more conservative for my battery type/age, or my high voltage pack is in a more fragile state these days, or Tesla is discouraging me from Supercharging as often. I typically go to urban Superchargers which maxes out at 72 kW which hopefully reduces strain on my old car.


Given the inflated energy costs over the last year I decided to see how much of a difference exclusively Supercharging would make to my home electricity bill. Turns out it's a noticeable amount. 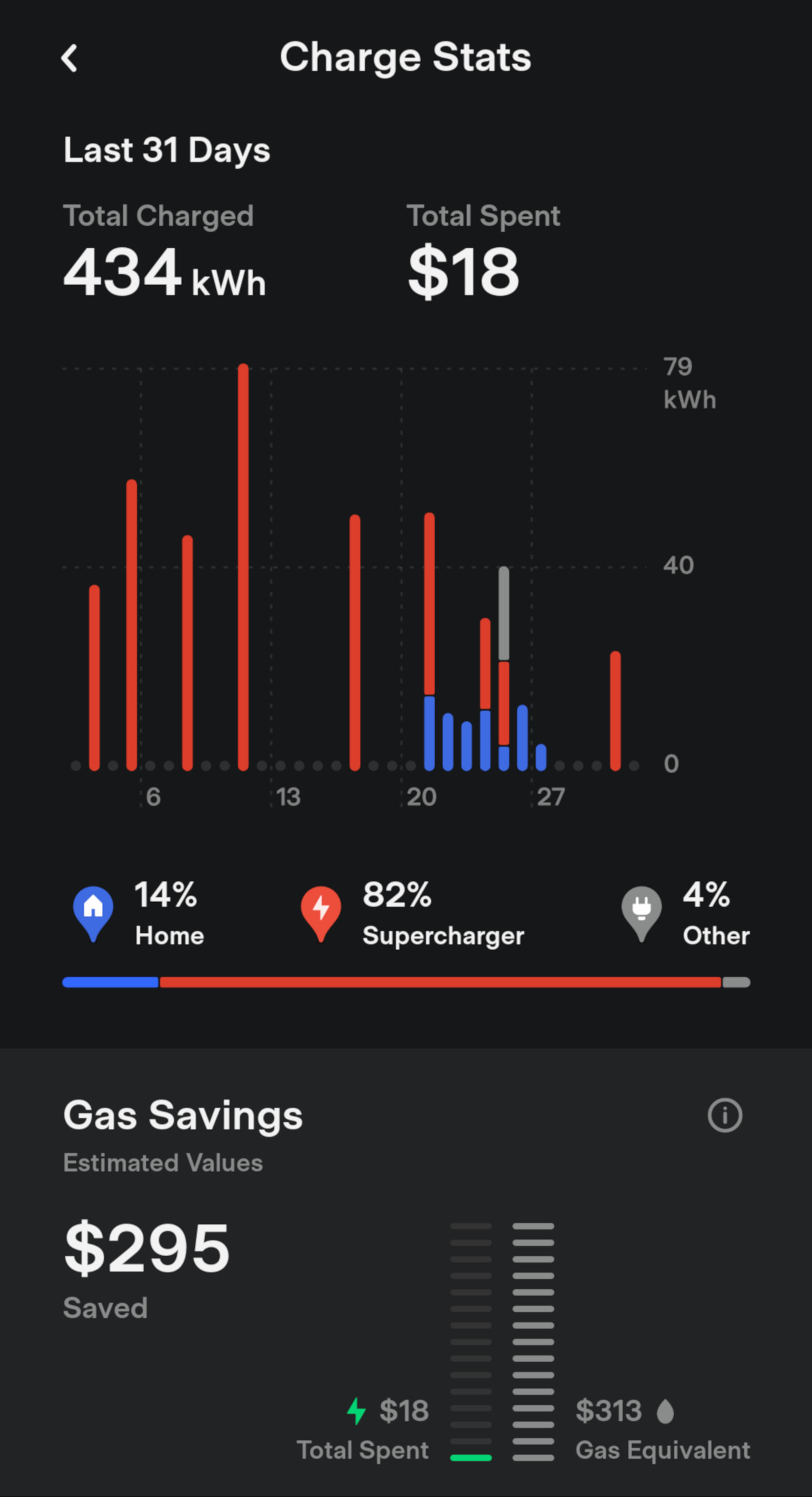 In terms of dollar cost it's not an amount that breaks the bank but it does add up over time. And perhaps I just want to see how "cost efficient" I can be (that is, being frugal or just plain cheap). I'm a bit conflicted on leveraging my Free Lifetime Supercharging benefit in this manner since the original intention was to use those facilities mainly for long-distance road trips, but since they're so common in the SF Bay Area now and I end up shopping at places where they're available anyway I just take advantage of them as long as there's no queue of other vehicles waiting. My only concern is how much of a long-term impact this has on the battery.


Lots of minor software updates this year (twenty-four in total so far in 2022!). Most are relatively minor and changes aren't all that noticeable for my old car. For example in a recent update the release notes mentioned the Car Colorizer, but it turns out this is not available for pre-refresh Model S. It'd be nice to get an unexpected surprise like, "Good news - we found a way to make Full Self Driving an option with the archaic technology in your car!" but alas one can only dream.


The 8-year warranty covering the high-voltage battery pack and the drive unit (which has already seen two replacements) is set to expire tomorrow. This worries me, to put it lightly. Most of my commute has been by train in the last few years so I haven't been putting much mileage on the vehicle for a while, but the peace of mind that comes with an active warranty covering the drivetrain and battery is no longer there. Tesla battery packs seem to have a good track record for longevity so far, but a replacement is a relatively expensive proposition. I don't sense any impending doom but that tingle of worry sits uneasy in the back of my mind. That said if the high-voltage pack had an early death (and using third-party services like Gruber Motor isn't a practical option), I'd be more inclined to get another pack from Tesla (with at least some kind of warranty) rather than entertaining getting a brand-new vehicle. The newer Teslas are great, but not that much better to justify spending the money yet for me.


So yeah ... still going strong. There are Teslas everywhere in my part of the country and it's hard to not be envious of what's around me, but I got in the game relatively early so that's the price you pay.