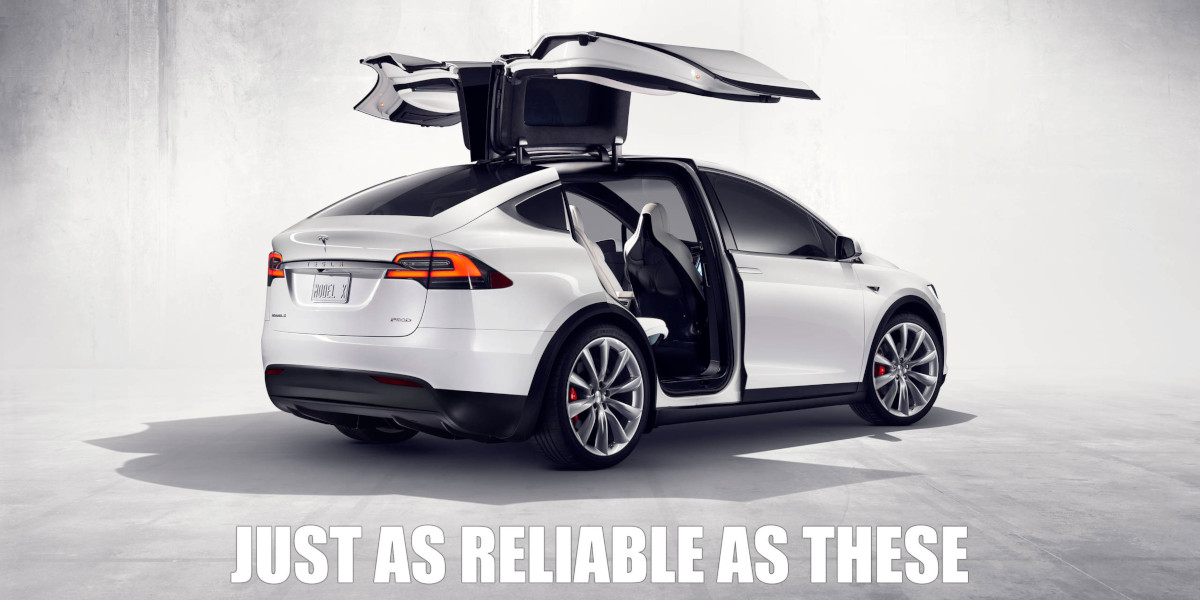 Having failed at (but aaaalmost succeeded) at a door handle repair earlier this month, I opened up the Tesla app and scheduled an appointment as this is apparently Tesla's preferred method of contact these days. Dealing with pesky, entitled humans in person or over email is hard. As I was creating the scheduling request, I left comments about my previous attempt at repair. The earliest I could get someone to come by was about a week and a half out, but since I would be out of town at that time I decided end of the month would do.

About a week before the appointment date I got an email and call from the Mobile Service technician to confirm the specifics and was also forwarded a cost estimate for the repair, about $600. This was much less than the 4-figure number that I was expecting. I had to electronically sign off on this to confirm the final appointment.

Similar to my previous experience with Tesla Mobile Service, on the day of the appointment the technician called about 20 minutes prior to showing up. Right on schedule, he drove up in a non-Autopilot Model S and got to work. I hung out and watched the repair process while explaining what I had previously attempted. Model S door handle repairs (at least for my Generation 2 variant) involve a retrofit of parts to turn it into the newer design (essentially a swap out of parts including the paddle gear and the microswitch wiring harness). My paddle gears have not broken yet, but the new version that Tesla makes is apparently better made: 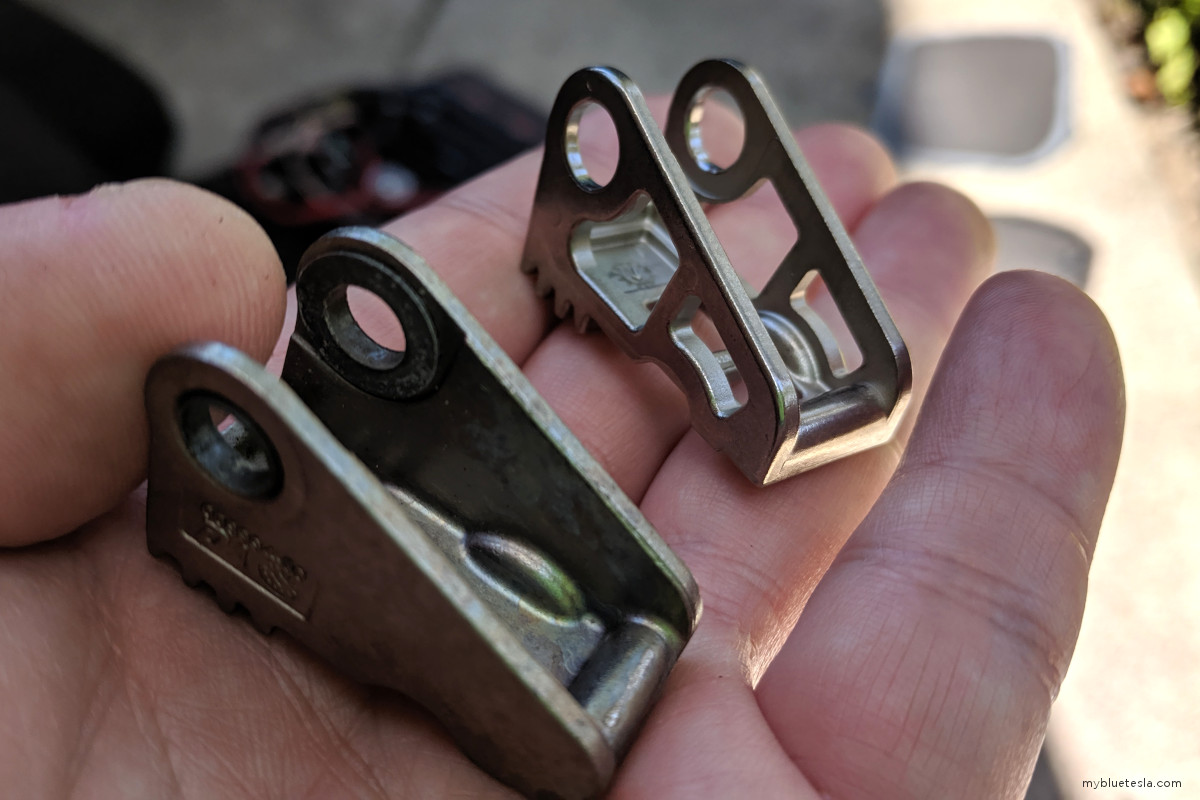 The one on the top is the newer variant while the original is the bottom one.

They're a similar upgrade to the version EV Tuning sells. The microswitch harness doesn't look as flexible as EV Tuning's version, but according to the technician this upgraded door handle variant should be rock solid in reliability. See https://evtuning.com/blogs/ev-tuning-blog/tesla-model-s-door-handle-failure-diy for more details regarding the different door handle generations.

My understanding is that real Generation 3 handles are a bit different and no longer use microswitches, so the repair performed today seems to accommodate the use of the existing door handle unit while swapping key parts wherever possible to the latest version to ensure reliability. So in effect, I seem to now have a pseudo-Gen3 handle. As long as it's not going to fail, it's fine by me. I had read on EV Tuning's site that some reprogramming or calibration would be required after this retrofit but it was apparently not necessary for mine. Perhaps that only applies to the Generation 1 design. The rubber back seal cover was also replaced since the sticky "glue" which held the old one in place was past its prime.

While he was doing the repair, we chatted about the process as well as his tenure at Tesla. He mentioned that Mobile Service techs have to spend some time at the Service Centers first so they are well-acquainted with the cars before they do any in-field work (makes sense). Interestingly he also started out at the company on the factory line-up and eventually moved to the service side. It also sounds like he started at Tesla on the same month my car was built.

The entire repair took less than an hour and the bill surprisingly was half of the original estimate at $347.94 (including tax). 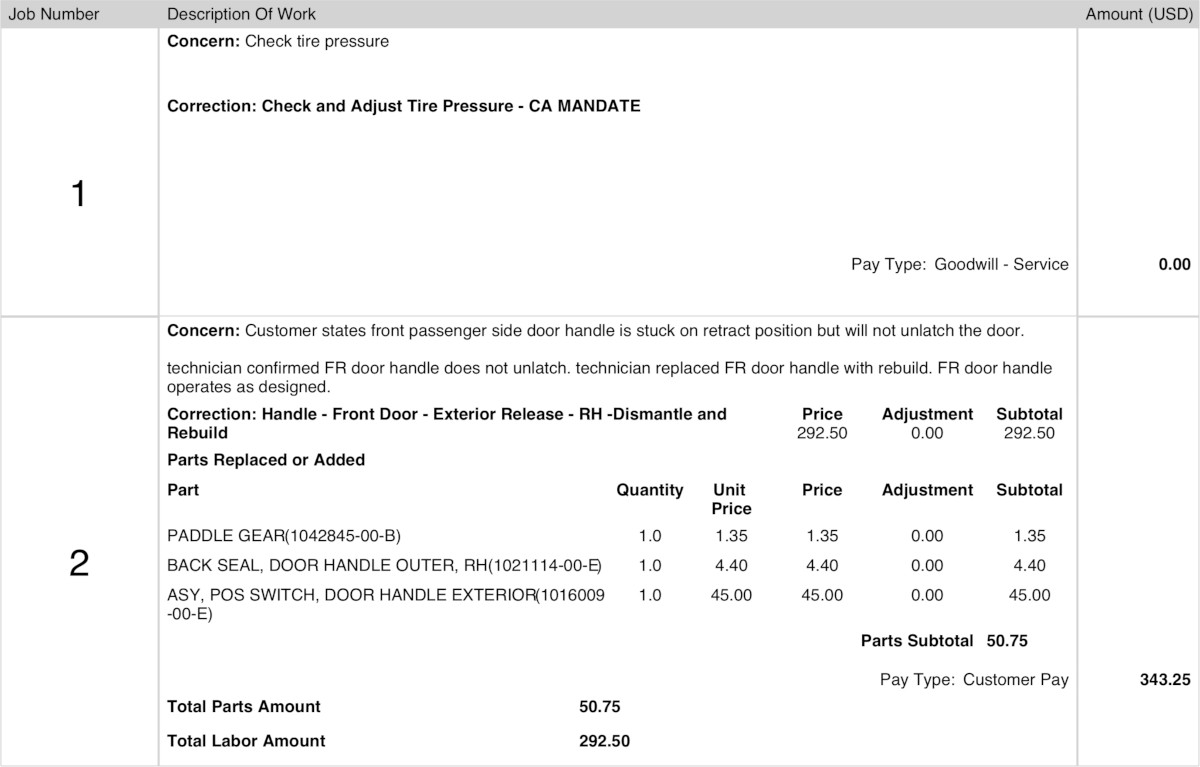 He gave me a few tips when reinstalling the bolts to mount the door handle unit back into the door panel. The window didn't need to be removed for the job (I've heard this is what Tesla techs do, but I guess this really isn't necessary). Another tip was to use one of the plastic trim removal pryers to help center the handle within the door's opening before fully tightening the bolts. I had done this much more manually by eyeballing it and adjusting by hand the last time and using the end of a trim removal tool seems like a clever technique.

While he was around I asked him about a couple of other very minor issues around the car and then I went through the payment process. Overall the Mobile Service option is immensely convenient and I would certainly opt to do it again since making a run to the Service Center takes hours out of the day.