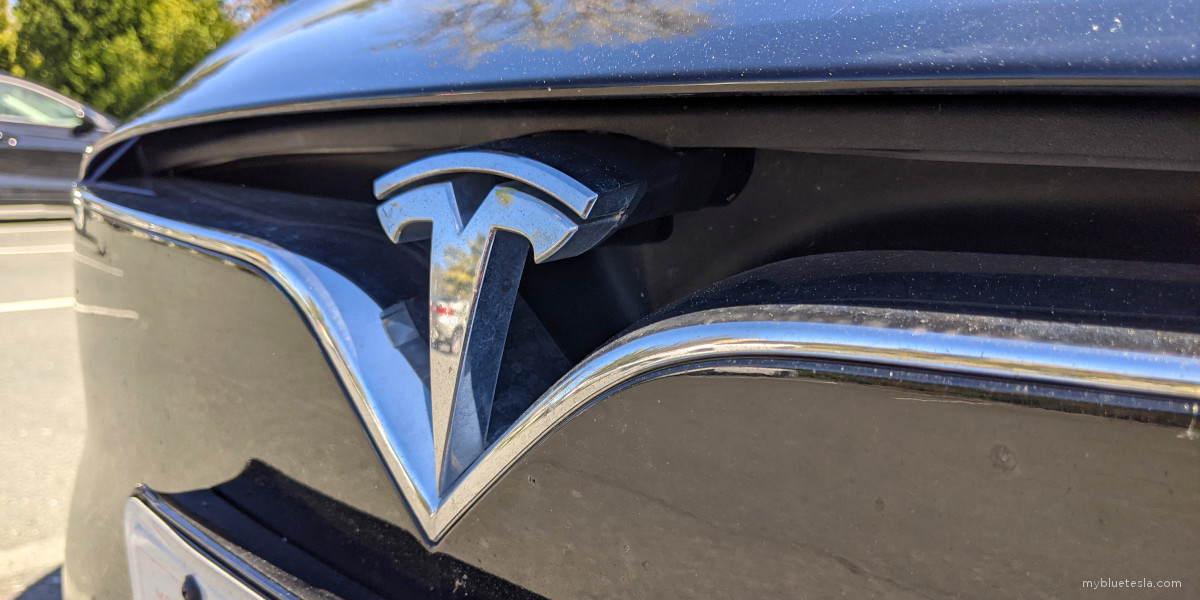 I checked my car into the Fremont Service Center today and after a technician immediately confirmed my motor noise issue following a short drive in the parking lot, the Service Advisor mentioned they'll likely need to keep the car over the weekend ... and to my surprise I was offered an Enterprise rental. I had been under the impression that loaners are a thing of the past but apparently they're still available. No need to Uber around for a few days. The next question was whether it'd be a Tesla or some crappy ICE vehicle.

Why of course it would be a Tesla - a Model S in fact (although I was secretly hoping for a Model 3 or Y ... heh). 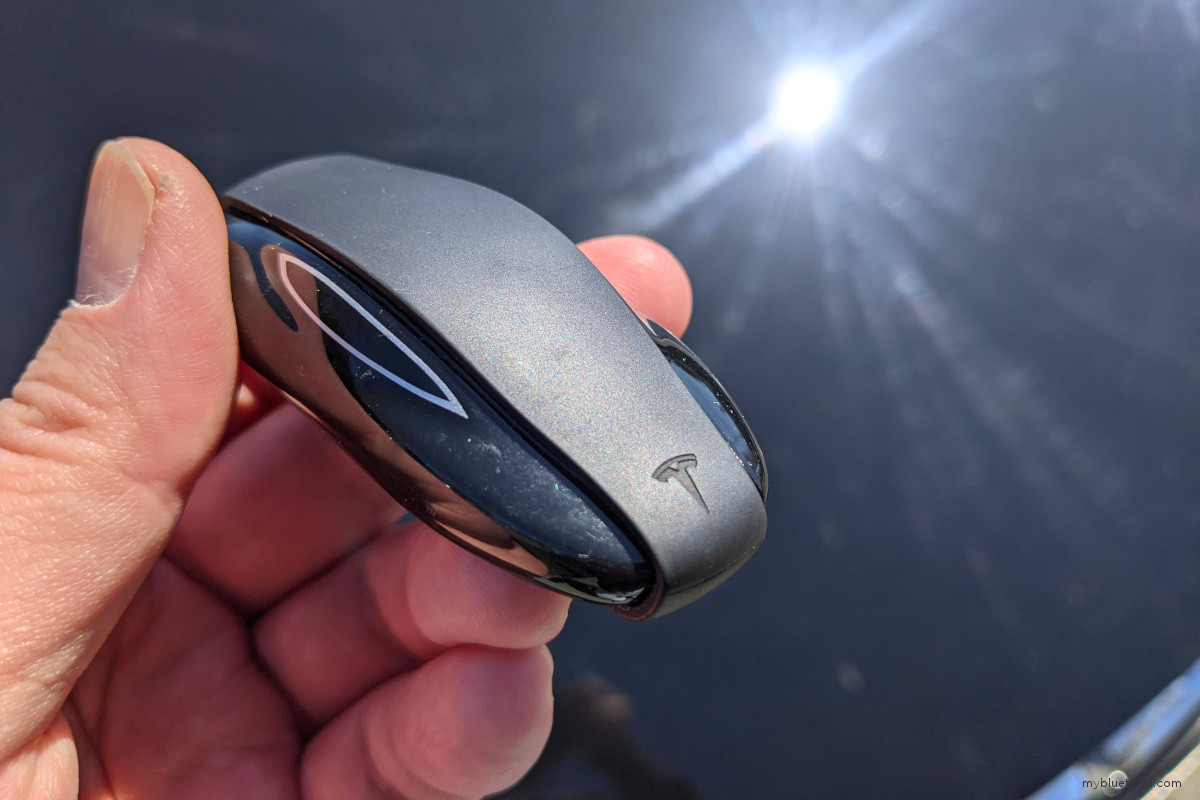 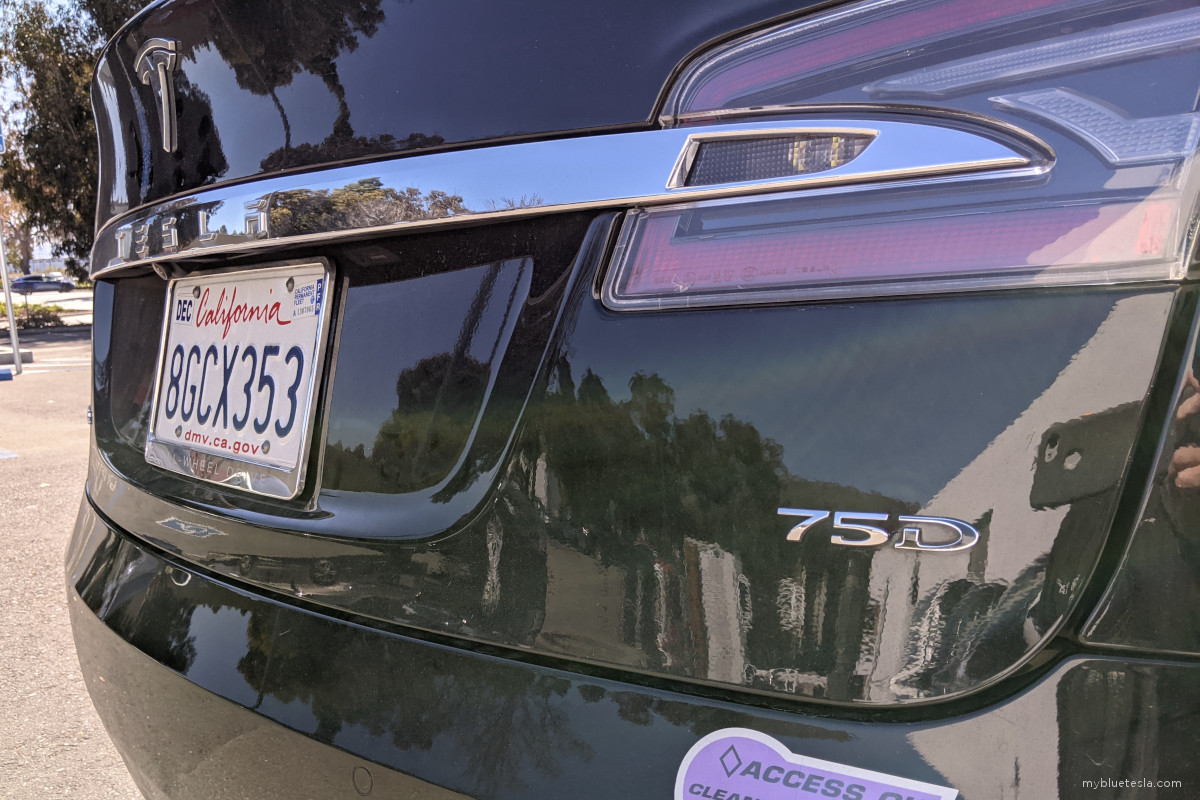 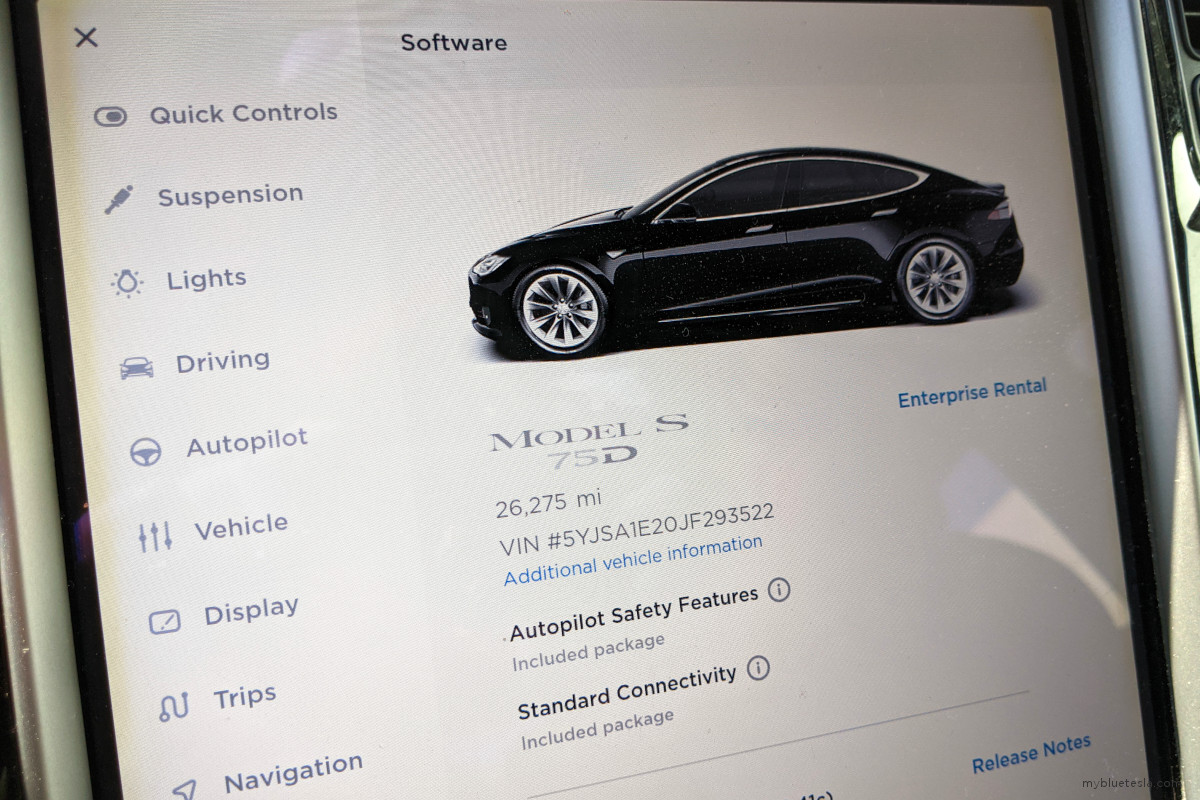 The last time I had a Tesla loaner was back in 2018 during my 4-year maintenance. This time around it was essentially the same car but in black. It came with the textile seats, my favorite. It was quite dusty inside though and the paint wasn't exactly showroom condition. 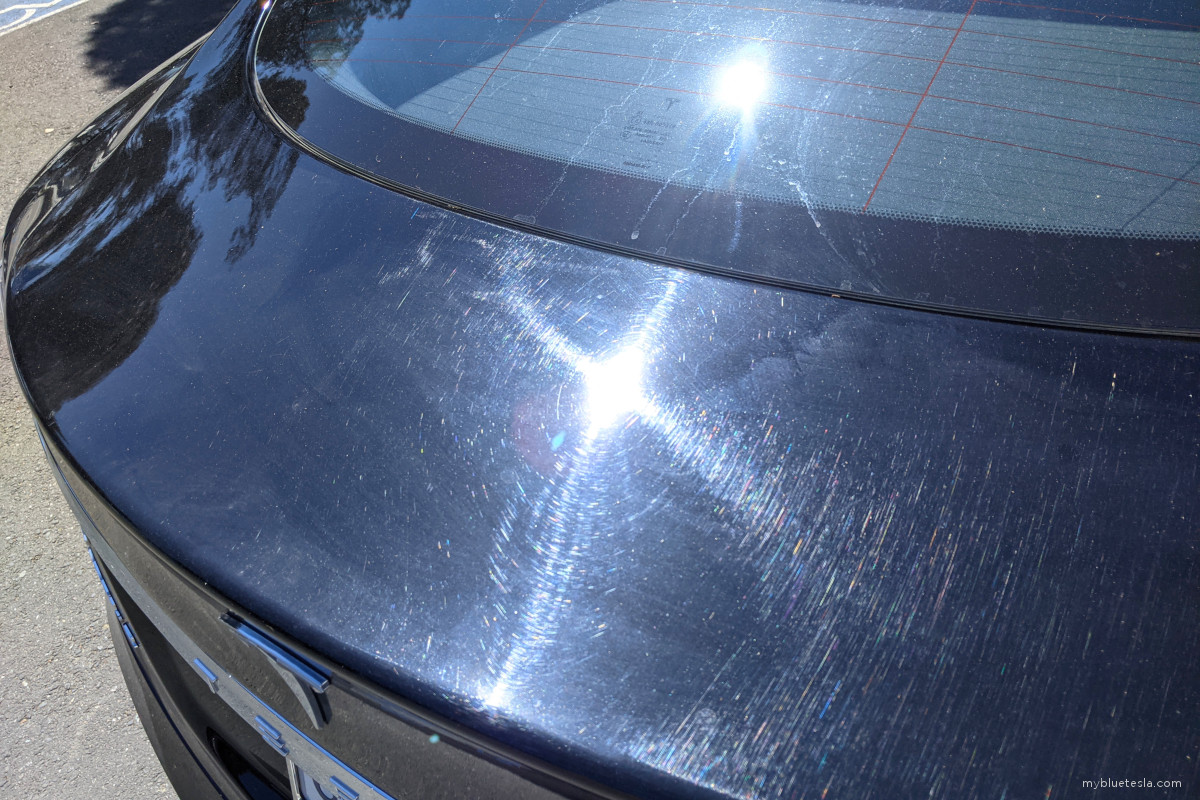 But as long as I don't have to put up with driving an ICE I'm okay. Enterprise also included some sanitizing wipes for my protection. I'll follow-up later with some interior cleaning of my own, of course. I'm also just tempted to wash the exterior as a courtesy. 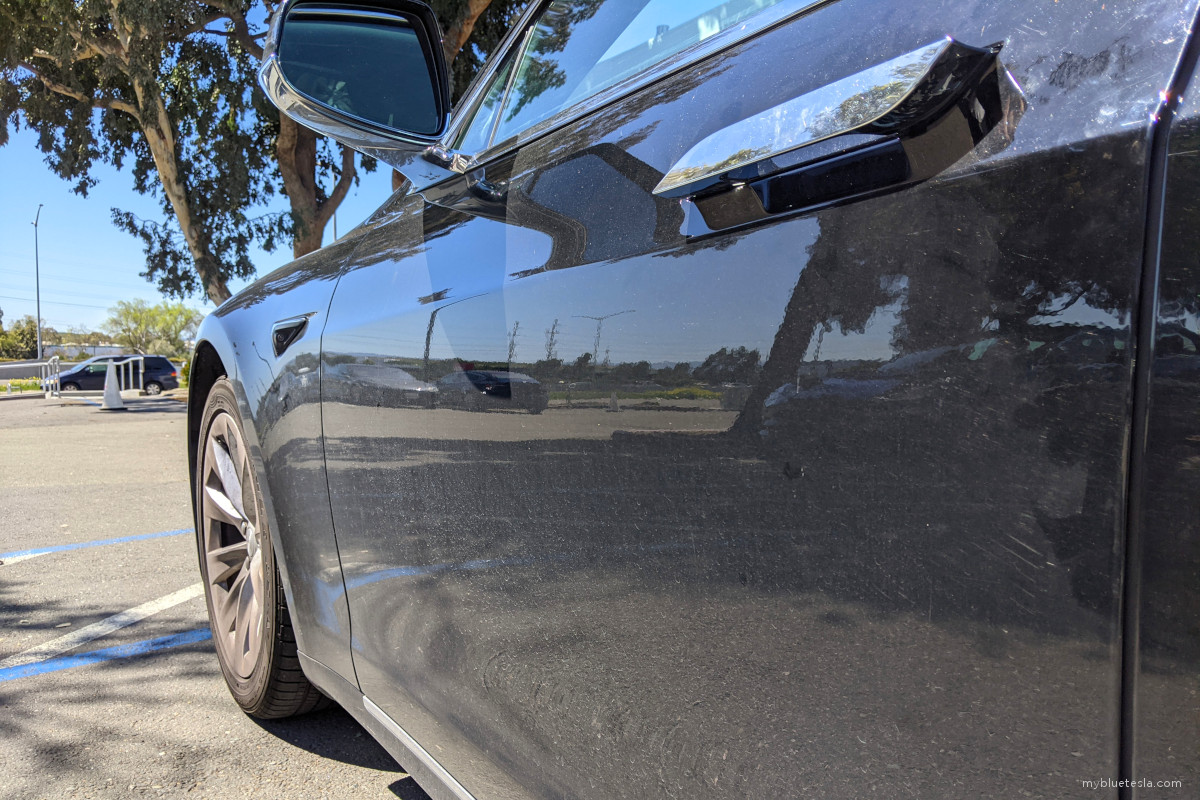 But otherwise zero complaints here! And as soon as I started driving I noticed my envy was sitting shotgun. The car jumps ahead quicker, the seats feel better, the ride is smoother (because: air suspension), the screen graphics are a little cooler, the newer Autopilot hardware shows off it's capabilities with more accurate vehicle avatars, there are additional camera views when backing up...

Everything about this Model S screams, "I'M SUPERIOR TO YOUR 6-YEAR OLD PIECE-OF-CRAP IN EVERY WAY IMAGINABLE." Well yeah, thanks for making it obvious.

In my car the vehicle avatars are nowhere near nice as these.

I'm very used to the original (now archaic) Autopilot system from 2014 so all the new capabilities available on more recent hardware is a bit more fascinating. One thing that I noticed right off the bat was how the system tends to interpret many side-of-the-road items as traffic cones, even though they may be fire hydrants, bicycle lane guard posts, or something else entirely. 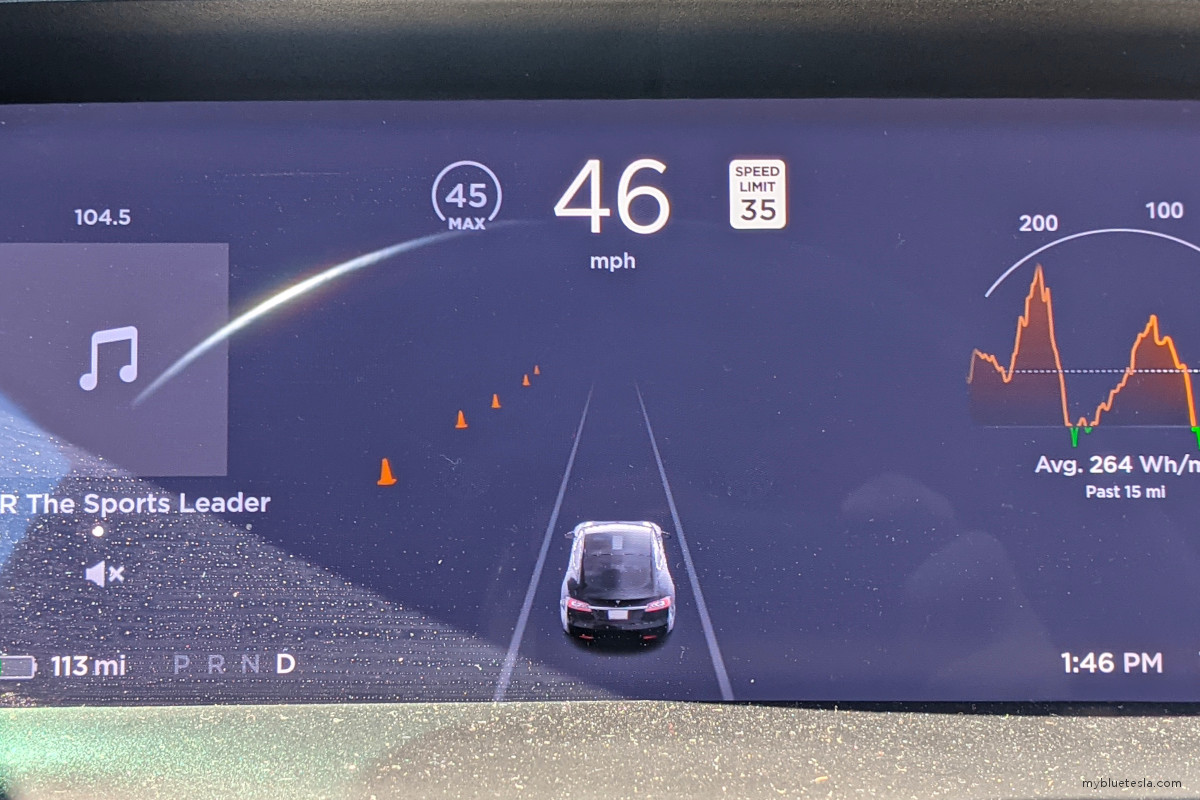 Just to be clear, in the picture above the cones actually represent large boulders placed along the side of Kato Road.

This particular MCU has that infamous yellow border problem (an issue that I luckily never ran into on my old MCU1): 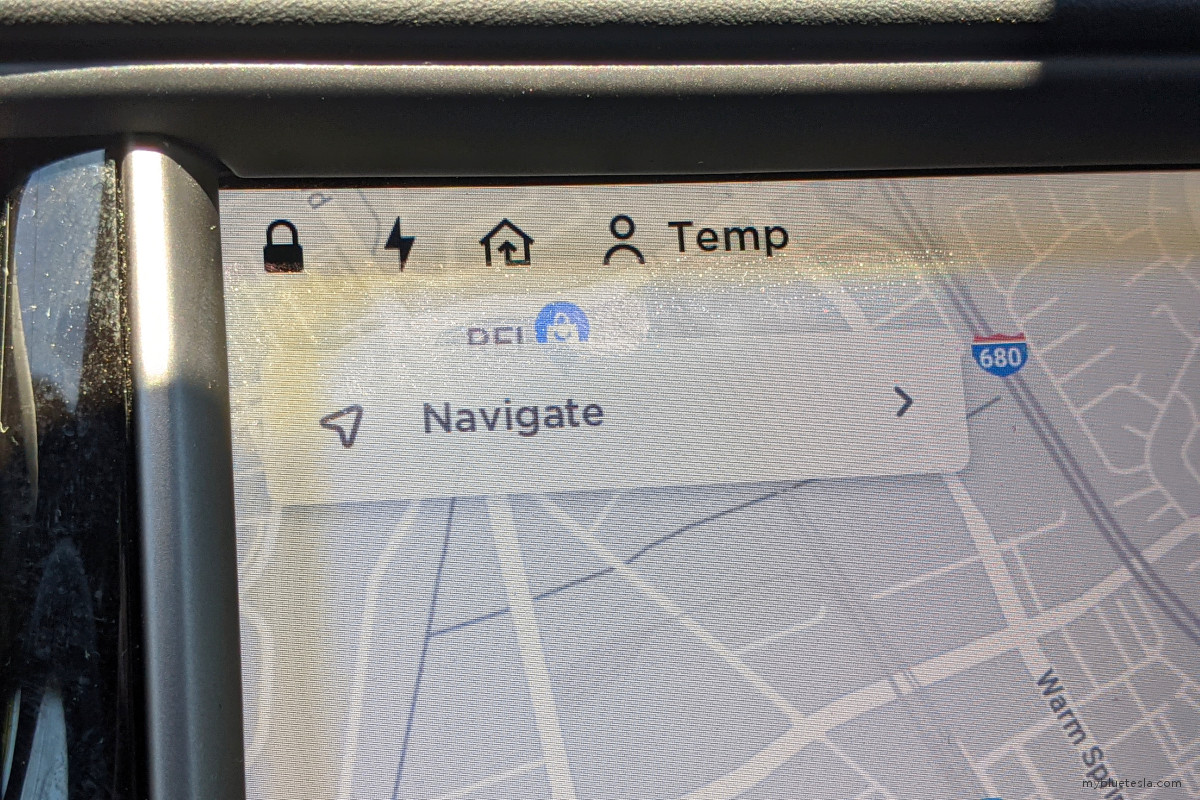 One downside is that since this is a loaner vehicle the Autosteer and TACC functions are disabled. Bummer. I quickly realized how accustomed I've become to those features being there. Not having them feels like I'm driving something primitive. What, like you can't automagically maintain a set distance with the car ahead? What sort of peasantry nonsense is this?

This weekend's weather forecast calls for sunshine and 70s all around. Guess what I'm going to do... That's right - some longer-distance-than-usual errands.

Oh yeah, and I hope it takes Tesla Service about a week to fix my car. Take your time. Thanks.

Update 03/28/2021: Spent this weekend getting acquainted with the 75D, and at every turn it kept proving how inadequate my old car is. There have been lots of changes with Model S iterations from the last 5 years.

Dual motor is noticeably more efficient. I tend to average around 290 Wh/mi in my single-motor car. With the 75D I'm seeing 270 with the same level of (calm, I assure you) driving. While there's slightly more motor whine, the dual-motor performance leaps the car forward with more voracity than my single-motor setup. So this 75D is stronger yet more efficient than my S85. This is how Tesla spits in my face for not upgrading.

Supercharging was also a surprise. I stopped by a Target that had some urban Superchargers and the charge rate stayed at 72 kW until nearly 50% SoC. On my S85 the charge rate tapers off quickly and by the battery's half-way point I'd probably be looking at 50 kW if I'm lucky. This I'm rather jealous of. Again, this is Elon's way of prodding me to buy a new car. You bastard. 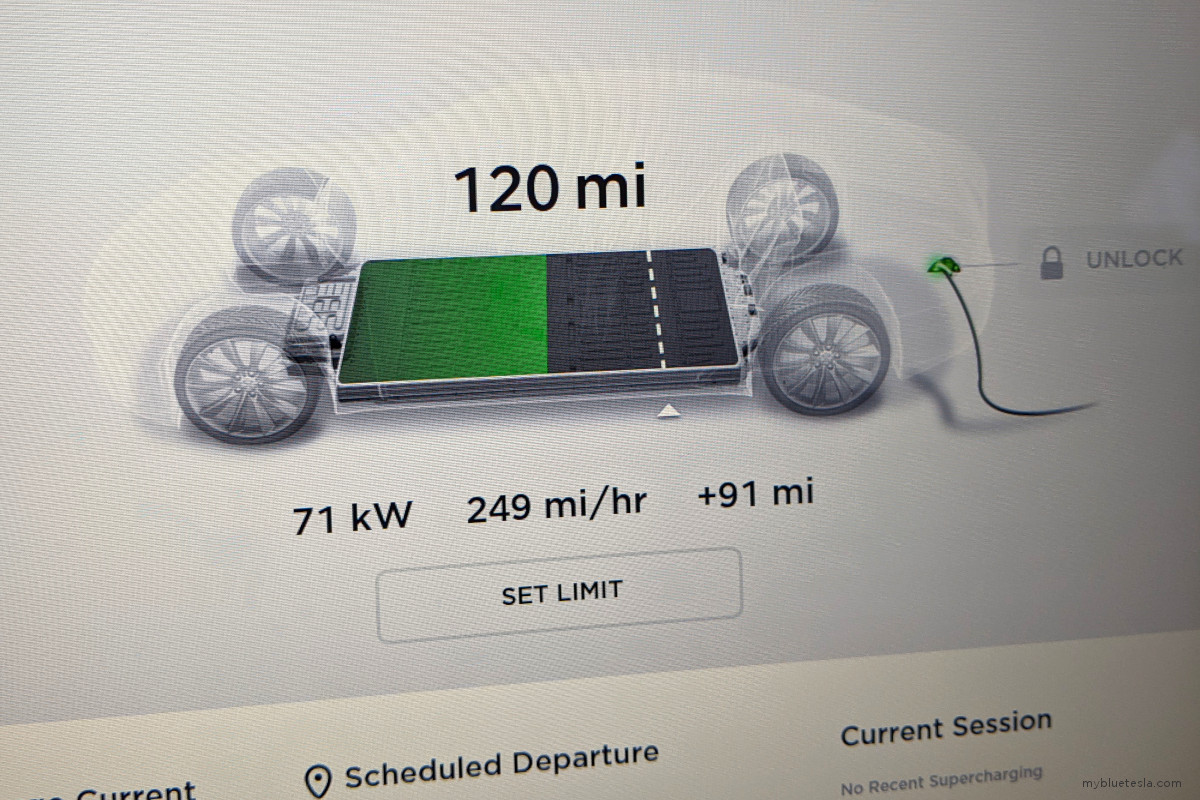 Question - why does the graphic above show the Turbine wheels while the on-screen avatars elsewhere in the menu correctly shows the Slipstreams? Hmm...

Interior cabin surface materials are a bit nicer. My S85 has a slight Frankenstein arrangement where most of the interior panels have that original (slightly more plastic-y) texture to them, except the dash cover where it's the newer, smoother style due to the original being replaced when I asked the Service Center to look into squeaks and noises right before my warranty expired. This was years ago when Tesla was still providing that level of effort for Model S owners. Ah, the good 'ol days.

That said, this car's interior rattles more than my 6-year old S85. You know what they say about Tesla build quality...

In the instrument cluster there are now visualizations for bicyclists and people near the car. Even for people walking their dogs! This was a pleasant surprise, although apparently this update came out sometime last year for vehicles that aren't ancient like mine. It also seems that any object not fully identified as a person, vehicle, or bicycle will be shown as an orange traffic cone. Perhaps it's just a default placeholder image to indicate "something" is there. 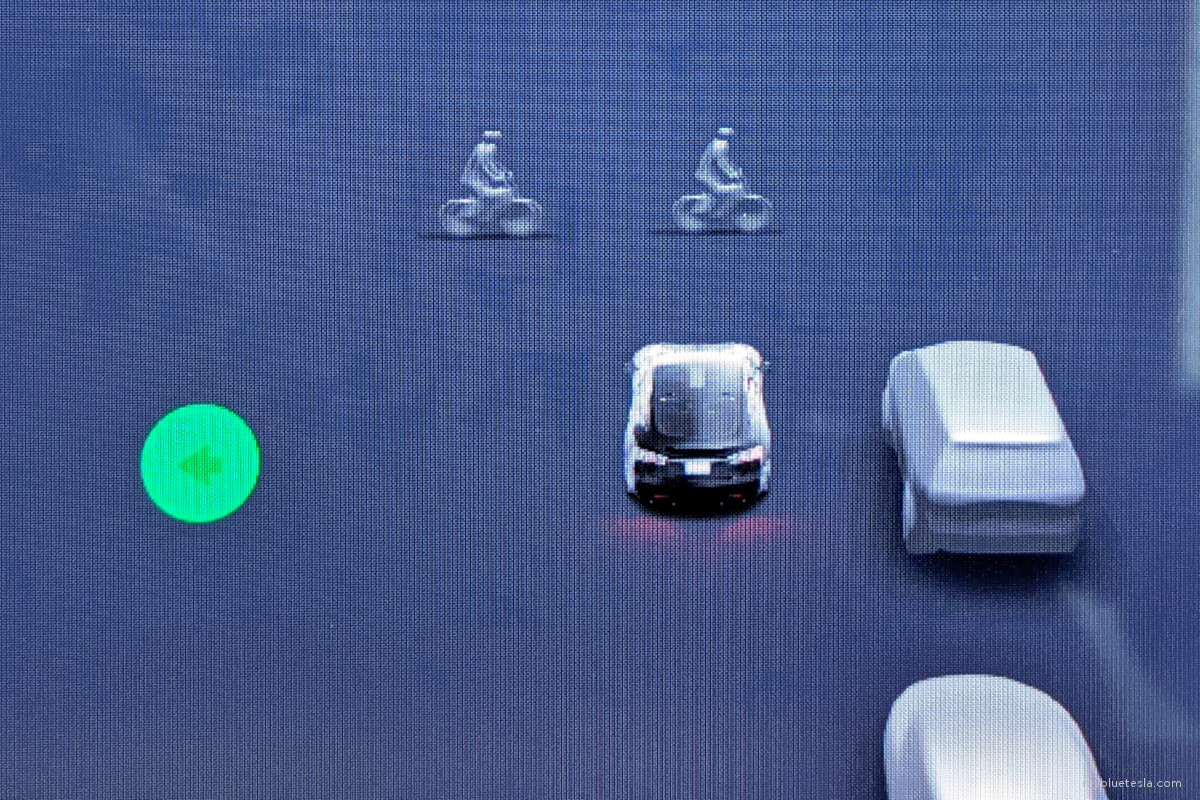 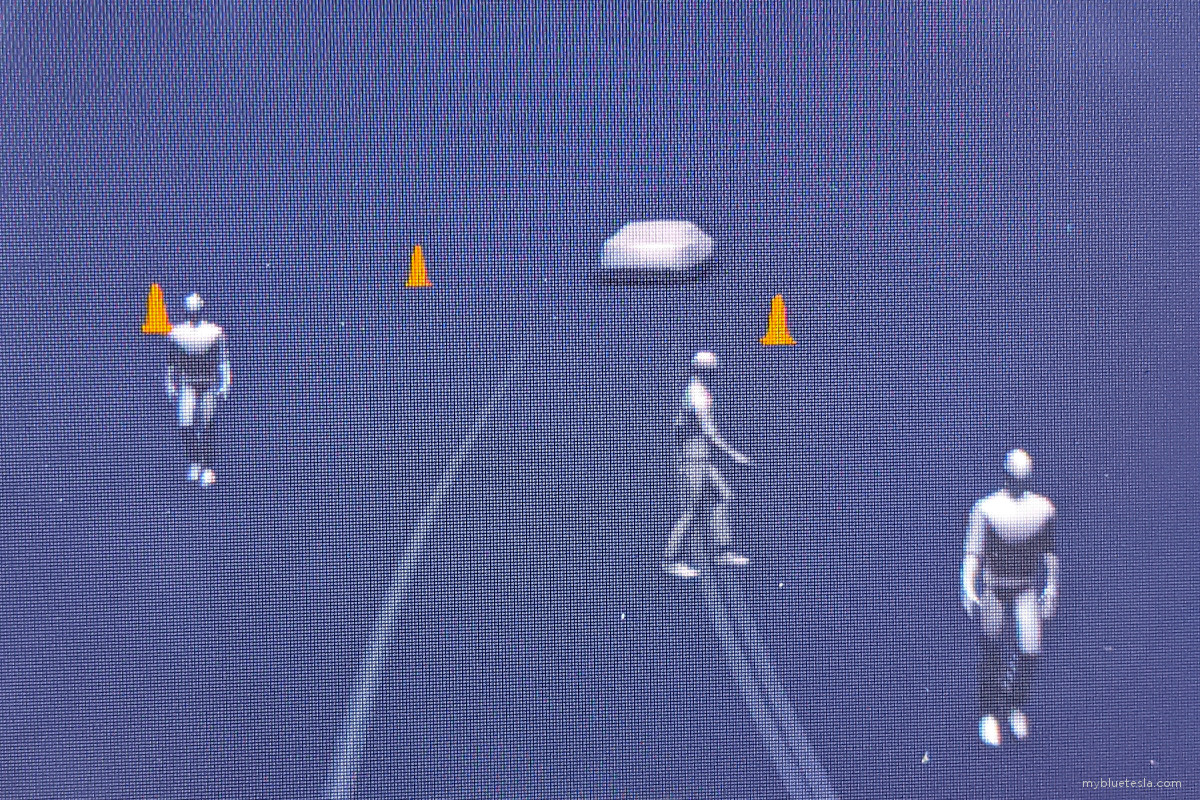 Not only does the newer instrument cluster alternate between close-up and zoomed-out views and also angles the car avatar while making turns, there's also ground reflection for the brake lights. I know for sure my S85's doesn't do the zoom changes, even though the instrument cluster display is a new unit recently swapped out for MCU2 upgrade compatibility: 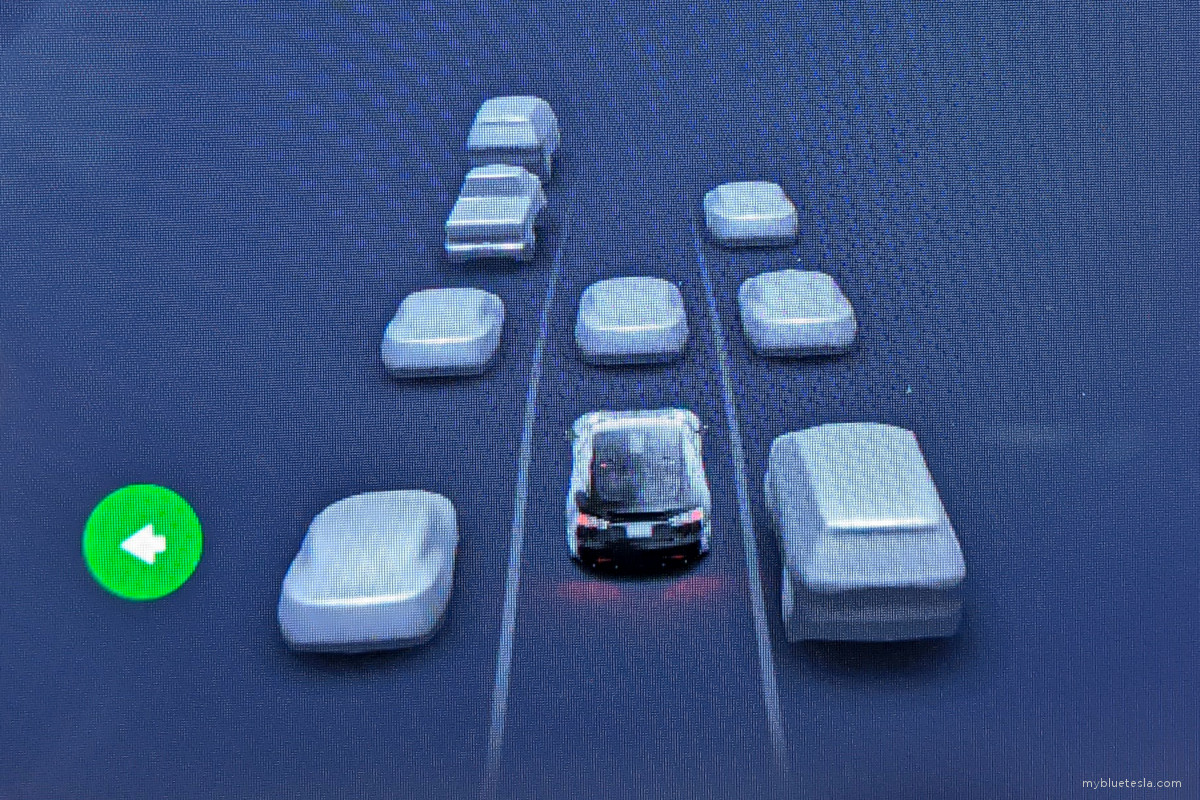 A minor note are the vents at the base of the windshield. For years now it's been one continuous grill spanning between the A pillars. 2014 and earlier models have pronounced trim pieces which frame the vent outlets and these reflect against the windshield during daylight. The newer design is less distracting.

Speaking of reflections, the gloss black wood dashboard trim (I think this is called Dark Ash Wood?) bounces the sun into my eyes. I've never been a fan of interior surfaces that have a polished look (with the two displays being an exception). It scratches easily and casts a cheap bling look in my opinion. If I had bought a Model S and this was the only trim option in my price range I'd go aftermarket and grab some vinyl wraps.

Another minor interior note is the lack of a dead pedal plate. In 2017 Tesla changed this part of the driver footwell so the left foot just rests on carpet. This feels wrong somehow. And the rear bench headrests are higher compared to the "stubby" ones in mine. This is a design change that I think was made back in late 2014 and considering they impede (the already compromised) visibility out the rear hatch, I'm glad mine are the way they are.

Regarding this 75D being an Enterprise rental, there's no traffic data in the navigation screen. That's what I get for driving a car with just Standard Connectivity. No Premium for stubborn S85 owners who refuse to upgrade. I also noticed that data about previous drivers of this car were not deleted prior to handover to me. For example, the Bluetooth settings have several previous drivers' phone profiles: 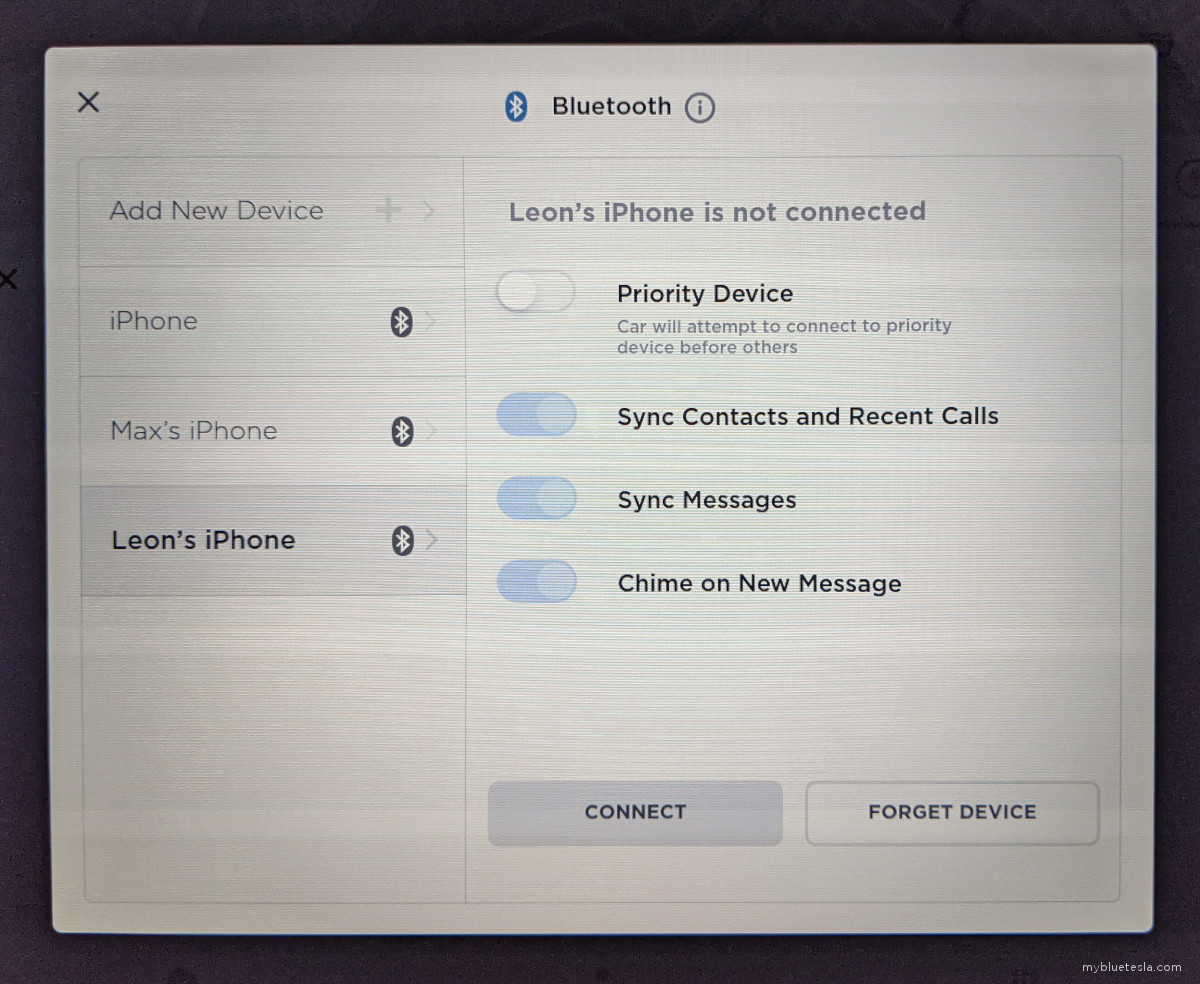 And while there were no home Wi-Fi profiles configured, the Navigation search history clearly showed where this car likely has been in the last year - various restaurants, golf courses, some Superchargers, malls, and grocery stores (or at least Whole Foods Market, of course). If anything I now have a list of new eateries to try out.

I'm guessing this particular loaner was previously owned by a private owner, then sold to Tesla, who then sold it off to Enterprise. That might explain the HOV/Clean Air sticker. 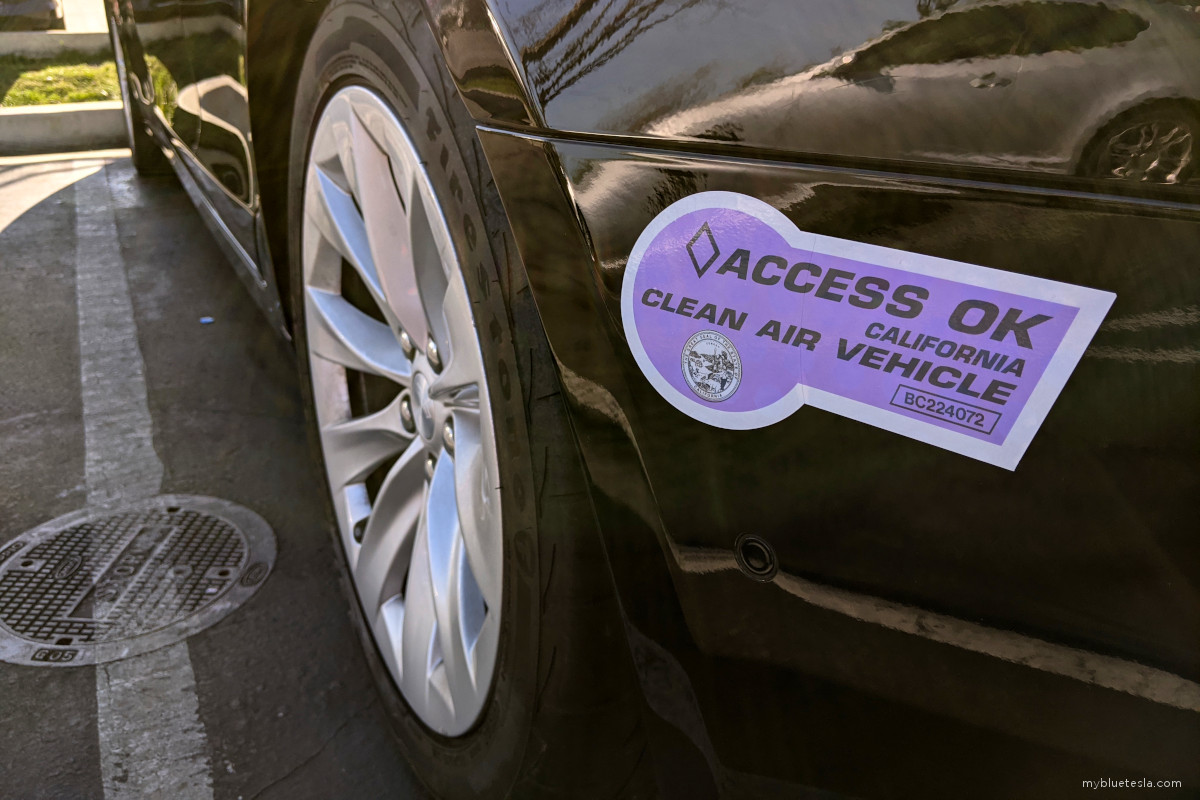 In other news, I drove past a Mustang Mach-E earlier, the first time I've seen one in the flesh. While there are tons of Teslas and Bolts in the Bay Area, I've only seen one Jaguar I-PACE, two Audi e-trons, and a Porsche Taycan. I don't think the Mach-E really fits with the Mustang image and it tarnishes the Mustang brand. 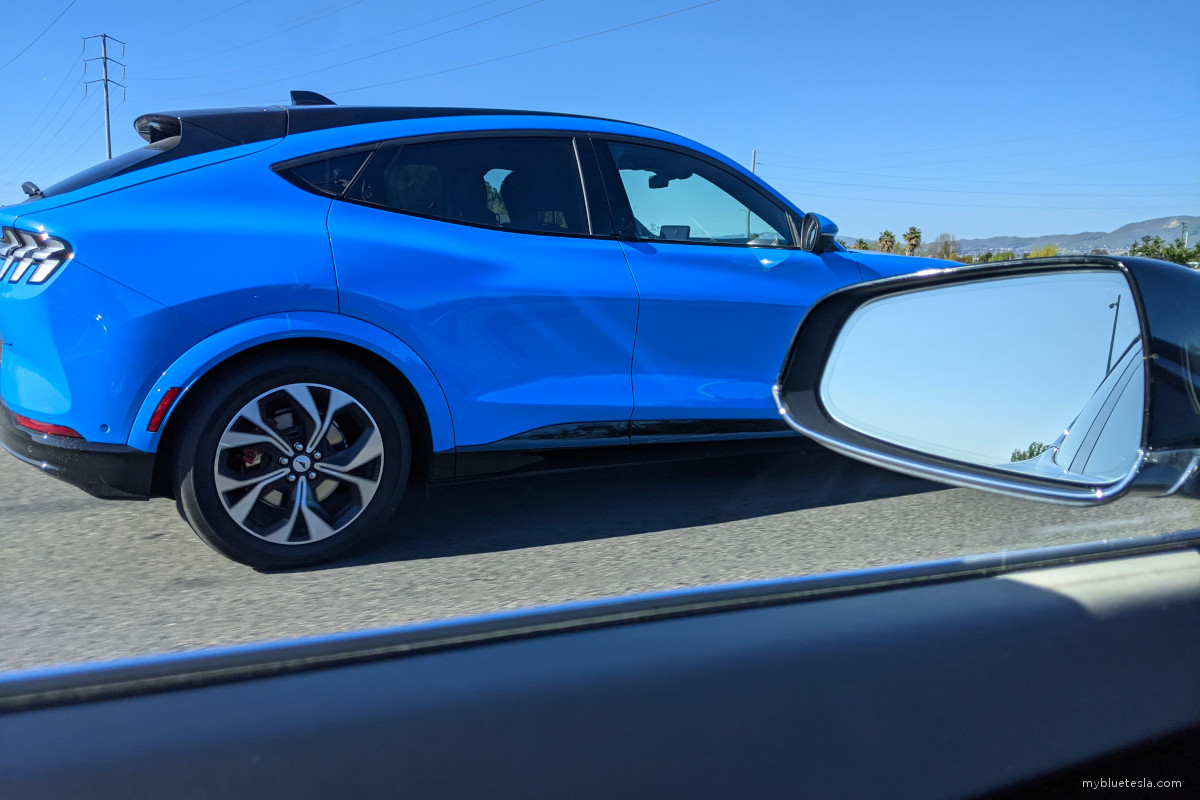 On Friday I also saw the new Lucid Air driving around Newark. Note the exposed charge port. Unlike the camo'ed version I saw a few years ago near their old Fremont prototype facility, this (test mule?) was decked out with pre-IPO advertising: 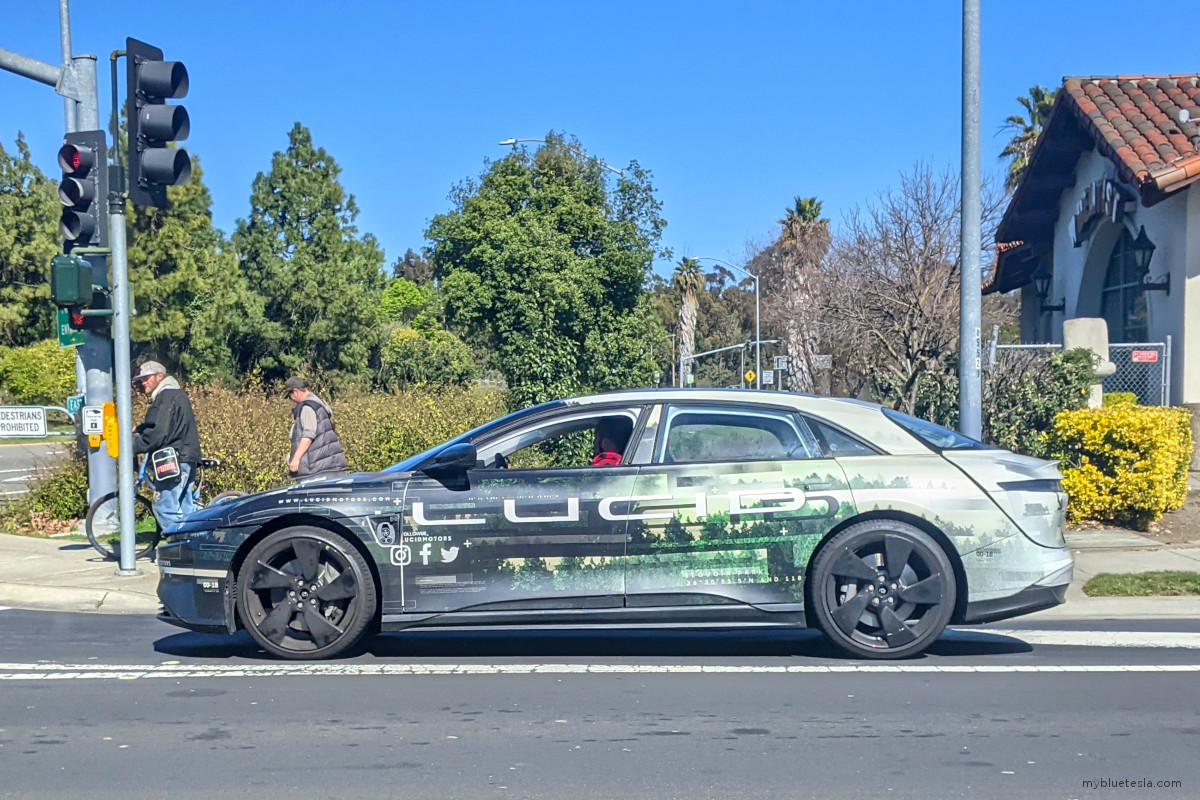 Overall the only thing I miss about my S85 so far is Autosteer and TACC. They make freeway driving so much easier. I also have yet to do a 0-60 stomp-on-the-pedal since I rarely do that anymore. It'll just be yet another reminder of how far behind the (Tesla) times I am. At least my paint looks a ton better.